Kyle Wilkerson got his first look at kitchen operations for Burlington Beer Works on June 25. At the time he was interviewing for the position of executive chef, which would become open in July. Wilkerson, one of the top farm-to-table chefs in North Carolina, would be an interesting and perhaps an exceptional hire for the microbrewery and restaurant, which had opened in March. Tracy Schmidt, general manager of Burlington Beer Works and Wilkerson thought it would be a good idea for him to visit the restaurant and kitchen, look around and meet the staff.

Wilkerson arrived with a few ideas for specials. Schmidt was impressed when he asked if it would be OK to stay and work the dinner service. She agreed and  he asked “Where is the farmers market?” Schmidt sent him to the one at North Park. It was a strong pairing from the start.

“It’s great to have an idea, walk in there and be able to go to the farmer’s market, see this beautiful okra and say ‘let’s put that okra on that plate and make it better than it is.'” Wilkerson says on Thursday, July 11 as he recalled that day. “I got there at 4 p.m. and at five o’clock we’re creating the dish. The okra was picked that morning  In less than 12 hours it’s from the farm to the plate. It doesn’t get better than that.”

Diners at the Beer Works on June 25 were treated to a couple of new items. For that night’s specials he concocted heirloom tomato and pimiento cheese pies. He then placed some of the pie with a bone-in pork chop, already a menu favorite. The pies accompanied by fried okra and a basil vinaigrette gave the dish a winning makeover.

“This is our guy,” Schmidt recalls thinking to herself.

Customers felt the same way. It was a hit. 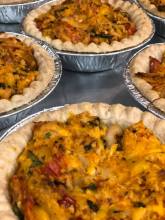 Beer Works patrons can expect to see more of the same going forward. Wilkerson was hired officially as the new executive chef at Burlington Beer Works. He begins on Monday, but he will attend the monthly event for Beer Works owners from 4 to 6 p.m. on Sunday and meet a few faces that will become well known to him.

“I’m over the moon,” Schmidt says. “I’m so excited he’s coming to the Beer Works. I couldn’t think of a better fit.”

She has reason to be excited and people in Burlington interested in food and revitalizing downtown do, too.

Wilkerson may sound familiar to people with an interest in fine foods, emerging chefs and restaurants in North Carolina. He was the chef behind Heirloom, a Poppa Paul Kitchen located in a converted old retail building in downtown Roxboro that closed after two largely brilliant years in March 2019 following a partnership issue unrelated to the quality of food, service or popularity. During that time it received largely breathless reviews from customers online and in the media. For a long review of Heirloom, a Poppa Paul Kitchen (named for his great-grandfather) go here.

Writing about Wilkerson for the News & Observer of Raleigh in 2018, Fred Thompson compared him to Vivian Howard, who returned to Eastern North Carolina to open Chef & the Farmer, a restaurant in downtown Kinston that often has a waiting list of a few months as people flock to a once forgotten downtown area in a small, struggling Southern town. Howard, host for five years of “A Chef’s Life” on PBS, is often hailed as a visionary chef who owns other restaurants in Kinston and Wilmington. She is also a strong advocate for downtowns.

Wilkerson is a Durham native who graduated from the culinary program at Wake Tech. His restaurant stops in his career include the Washington Duke Inn, Four Square and Watts Grocery. All are highly regarded. Until being hired by Burlington Beer Works, he had returned to the Washington Duke Inn. Wilkerson, 35, has a young son.

Schmidt was very aware of Wilkerson and his reputation as a chef and the success at Heirloom, a Poppa Paul Kitchen. It was a popular spot for locals and developed a regional following who found it to be a gem in an evolving downtown in a small North Carolina city. Schmidt knew she was going to need an executive chef in July and a mutual friend got the two together, Wilkerson says. The current executive chef, Cody Myers, is starting a breakfast-lunch restaurant in Greensboro with friends he met in culinary school at Johnson & Wales.

“She told Tracy ‘Here’s this guy doing farm to table food, great food that would complement what you’re trying to do in downtown Burlington,” ‘Wilkerson says. “She felt it would be a good match and told Tracy that he’s what you’re looking for.”

Wilkerson liked the set up and environment immediately.

“I like the development. I like that they’re repurposing downtown. That’s what we were trying to do in Roxboro, revitalize downtown. And being from Durham and seeing how Durham revitalized downtown  it makes you realize that downtown is the heartbeat. That’s where everything happens,” Wilkerson says. “I like that it’s the first co-op beer place in North Carolina. I like what they stand for and everything that it’s about. And the beer’s good, that’s a big plus.”

Burlington Beer Works already has a stout local following. The brewery and restaurant are busy every night. It has a small but well executed menu that Wilkerson hopes to enhance. His background is in fine dining but he has ideas for improving the menu across the board.

“The menu will have still have my nice plates that I do. But I also look forward to the bar snacks and things like that and getting into that a little bit more,” Wilkerson says.

“Right now we’re good and consistent. I can’t say enough about Sam (Forbis) at the beginning and Cody. They got us in the right place to be where we are,” Schmidt says, referring to the chefs who got the Beer Works started. “Now it’s time to elevate. Kyle is the person who will enable us to do that.”

Wilkerson says he’s looking forward to going out to local markets and farms and establishing relationships that will help define his vision of Southern fine dining with fresh ingredients..

“What I always tried to do at Heirloom was get the best of the best. You want to find a local person that’s as passionate about farming as you are about cooking the product. It’s about a partnership and making things happen,” Wilkerson says. “I want to let local farms shine through the food.”

Schmidt wants Burlington Beer Works to become a go-to destination for not only people in Alamance County but regionally. It can be a leader not only in a downtown renaissance but a culinary foundation and champion for an area the city wants to turn into an entertainment hub. The Vivian Howard model is appealing. Speaking at Elon last spring, Howard said she returned home to Kinston with a vision of providing food that wasn’t just “good enough” but great. Her advice to businesses hoping to gain traction in downtowns in North Carolina is to make whatever they’re doing as great as it can be.

Schmidt is hoping that Wilkerson will be symbolic of this goal.  “He will have a visible presence for our customers. People will get to know him,” Schmidt says. “Jeremy (Hunt) is the face of our brewery and I want our chef to be the face for our restaurant. Kyle is that guy.”

For his part, Wilkerson is ready to start cooking. “That’s my plan, keep it fresh. Keep it vibrant. Keep it local,” he says.