It was just after 2 p.m. on Friday (March  15, 2019) and Tracy Schmidt is in the middle of a conversation with Sharon Dent. They are on the second floor in the new Burlington Beer Works microbrewery and restaurant overlooking Front and Main Streets in downtown Burlington. Schmidt, the general manager, and Dent, president of the Beer Works board are going over a few details following a head-spinning morning and early afternoon on the road, in Raleigh, then back in Burlington. It was already a long week, and it still had a good way to go.

Friday, for example, they began the day with a trip to Raleigh applying for and obtaining a state license to sell alcohol at what will be Burlington’s newest and most unique restaurant when it opens full-time – anticipated to be March 30. Of course, there was a minor snafu involving the address of the brewpub, which is now 103 E. Front Street. When the Beer Works first started its long journey by taking over the old Billers Jewelers building a few years ago, the address wasn’t the same. A quick call to Burlington City Hall and some online interaction untangled the problem and the license was successfully procured. “The city has been great in helping us whenever we needed it,” Schmidt says. Earlier that day, work was completed on a final piece of sidewalk. The largest part of the sidewalk job was finished on Thursday so the Beer Works could obtain its Certificate of Occupancy.

Thursday and Friday were among the final hurdles the Beer Works needed to clear. Friday it was still difficult for Schmidt, who was hired as general manager in September 2018 for the long-sought and often delayed brewpub to believe they had reached this point.

So when Schmidt and Dent arrived back in Burlington at about the time an afternoon rainstorm occurred, they could be forgiven for being a little weary. Rain and weather, after all, were identified by Schmidt as the biggest hurdle the Beer Works had to overcome since she started. I think anyone who’s lived here since August would understand.

Unfortunately for Schmidt, there was no time to rest on Friday. Even though the official Beer Works opening to the public is still a couple of weeks away, the Beer Works has a public event Saturday (March 16, 2019) tied in to the St. Patrick’s Day festival and parade in downtown Burlington. The microbrewery will provide a sample of its available beers in the Davis Street Beer Garden near the Rusted Bucket Tavern. Beer will also flow from taps at the Beer Works site on Front Street. The first floor only will be open for a sneak peak during the festival hours starting at 5 p.m. The restaurant will also offer a limited menu of specially produced St. Paddy’s Day-influenced choices, including corned beef and cabbage sliders and shepherd’s pie.

It’s just a small taste of what’s to come.

I had a chance to meet with Tracy Schmidt at about the time she and Dent returned from Raleigh. She paused to post an update to Beer Works owners — it is a co-op after all — via email. Since her arrival at the Beer Works from her previous job at 21C Museum Hotel in downtown Durham, she has made information to those interested in the brewpub a priority. It’s appreciated. Many “owners” of the Beer Works joined the effort four or five years ago. Issues with obtaining the building, demolition and construction slowed progress. I’m sure some questioned whether the group could pull it off.

And they have indeed pulled it off. Schmidt wants all to know that while the co-op has a couple thousand owners, it’s a public bar and restaurant open to everyone. “It’s not a private club,” she says.

Community anticipation is high regarding this new downtown Burlington venture —  the city’s first microbrewery and brewpub. It’s potentially a strong anchor for the area with an ability to attract people from throughout the region. Schmidt expects a big crowd for Saturday’s event. A sneak peak on a rainy and icy day on Jan. 12 drew 500 people in a two-hour period. Based on what I saw on Friday, folks won’t be disappointed.

I sat with Schmidt at a table in the second floor dining area. It’s a lovely spot with large windows offering views of Main and Front Streets. “I love, love, love the view from upstairs,” she says. Like all older downtown buildings, there are exposed brick walls. Wood floors complete the picture. At a brick wall stands an old pew from the Church of the Holy Comforter. It will be used as a seating area, Dent told me.

Schmidt says that after the St. Patrick’s event, the Beer Works will close for a week to complete training the staff, which was in progress at a first floor bar on Friday. The kitchen staff, under the guidance of Executive Chef Sam Forbis, will start testing recipes. Forbis, the grandson of my longtime friend and newspaper colleague Frances Woody, trained in the Alamance Community College culinary program, was chef at the former West End Terrace restaurant in Elon and worked for Elon University’s Harvest Table. Forbis says the menu will change frequently to meet seasonal demands.

Schmidt, like Forbis, is a native of Alamance County, describes the menu as a modern twist on comfort food. “The entrees are inspired by what we are able to source locally and by locally I mean Alamance County,” she says.

The menu in progress for the March 30 opening has something for all tastes. There is a house-made vegan burger, for example. Other sandwiches include the Glencoe Bird or Burger — either grilled chicken or a hamburger. Truffle fries caught my eye among the appetizers. Entrees so far include Mediterranean stuffed portobello mushrooms, a pesto-crusted market fish and steak frites.

Schmidt says the Beer Works is working with its next-door neighbor, Smitty’s Ice Cream, to develop a specialty flavor created to complement the menu. You gotta love great neighbors.

I was pleasantly surprised to learn that the restaurant would offer brunch on Saturdays and Sundays with options like Eggs Benedict florentine, veggie quiche, meaty quiche, a farmer’s breakfast or french toast.

The bar has all ABC permits. There will be eight taps featuring Beer Works brews made on-site and four guest taps. Jeremy Hunt, a home brewer and longtime student of beer makers, is head brewer and favors a traditional style of ales, stouts and saisons. The set lineup of beers will get locally oriented names after they are selected. But the lineup Saturday could include a pale ale, an India pale ale, an amber ale, a saison and a stout, Schmidt says. The brews available on Saturday will depend upon how much can be kegged before the festival opens.

Guest taps are likely to include beers that can’t be produced at the Beer Works. Barrel aging, for example, isn’t available at the Beer Works, which hinders production of lagers, ciders and sours. From the start, Red Oak, produced on the Guilford and Alamance county border at a large brewery off I-40 /85, will be one guest tap at the beginning. it’s a great choice.

Greg Shammel is the beverage manager and will oversee bar operations. Schmidt calls him a “cocktail innovator.” Wine will also be available.

Schmidt says the Beer Works has already booked special events, including graduation and wedding parties, into October. There is a private second floor room that can occupy 16 to 20. The entire second floor has space for a party of 125 should a group wish to reserve that space for larger gatherings. The first floor offers a more casual atmosphere while the second is for more refined dining.

The biggest X-factor as the Beer Works prepares to open on March 30 is the status of the rooftop area. it’s not finished and might not be ready until late summer or early fall. ‘We’re going to kickoff a campaign to start a rooftop project,” Schmidt says. The floor needs to be solidified with decking and furniture purchased. Dent adds that buffers keeping patrons from getting too close to the outer barriers overlooking the street will be added. Dent says no one under the age of 18 will be allowed on the roof for safety reasons.

“Hopefully with all the excitement surrounding our opening that will push the rooftop effort,” Schmidt says.

I hope so too. See you there! 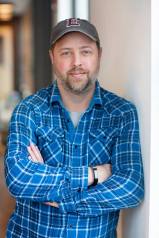 9 thoughts on “Let it flow at Burlington Beer Works”