I wrote this in 2013 for the 50th anniversary of the assassination of President John Kennedy. First published in the Burlington Times-News. I think this toon appeared with it. The conspiracies are still out there after all these years. For those who find themselves in Dallas, the Sixth Floor Museum at Dealey Plaza is well worth a visit. Well worth. And as it turned out, George W. Bush wasn’t the last president old enough to have memories of the assassination. Nov. 22, 2018, it will be 55 years. 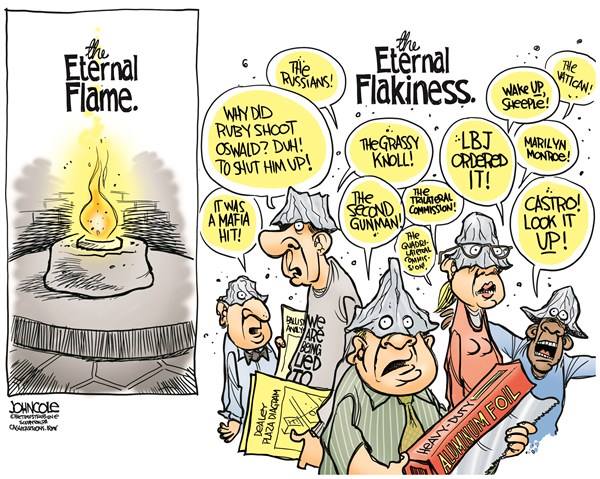 A recent poll reported that two-thirds of Americans have no first-hand memory of the unfathomable event in Dallas on Nov. 22, 1963, when a youthful American president was shot during a motorcade and killed — the first major news story to unravel via TV into American living rooms.

It was a singular event in our history molded in many ways by a fledgling media. Americans would never be the same again.

That’s why it’s hard to comprehend today, on that event’s anniversary, that so few are still alive who vividly recall the day gunfire roared from a nondescript book depository and echoed through the now infamous Dealey Plaza; the mortal wounding of President John F. Kennedy; his terrified wife Jackie reaching behind the convertible for a Secret Service agent — an open vehicle we would never see a president ride in again; and later the shocking execution of suspected Kennedy assassin Lee Harvey Oswald on live TV while in the custody of the Dallas Police Department.

The images remain fresh because modern media machinery renews them regularly for an evolving audience of Americans either too young to remember or born subsequent to the shattering assassination. It reinvigorates the Kennedy mystique — that notion of potential or greatness unfulfilled and paradise ultimately lost. And it reignites the dozens of conspiracy theories that have followed the shooting since the hours after the president was pronounced dead at Parkland Hospital and a nation first mourned, then began asking questions that seemingly had no clear answers. So much was layered in government secrecy, investigative missteps and public innuendo that it sparked decades of speculation and debate that continues to this very moment.

While the early part of the Baby Boom generation had the clearest attachment to the idea of an attractive family presiding over a new Camelot, the mystique wasn’t lost on others either. Contenders for president and vice president over the past five decades have latched onto Kennedy’s words and image. Democrats do so, and Republicans have as well. Former President Bill Clinton famously shook hands with JFK the summer before the assassination when he and other high school students in the Boys Nation program went to Washington.

By coincidence, Clinton and the man who followed him in office, George W. Bush, may be the last occupants of the White House who will have clear memories of Kennedy’s time in office. President Obama is the first American president born after the death of Kennedy. It was coincidental, then, that this time of reflection and tributes to the slain leader fell on Obama’s watch.

Wednesday, for example, Obama gave the Presidential Medal of Freedom — established in modern times by Kennedy — to a host of high-achieving Americans, including Clinton, the late astronaut Sally Ride, TV personality Oprah Winfrey and legendary University of North Carolina college basketball coach Dean Smith. Kennedy, killed before he could bestow the honor on an inaugural group of recipients, would’ve approved of honoring a youth from his time who rose to be a world leader, a space pioneer, an African-American success story and a coach who battled for civil rights at a time when it wasn’t popular in the South to do so. Today, Obama meets with leaders of the Peace Corps, another Kennedy initiative.

Wednesday night at the Smithsonian, Obama shied away from the assassination itself and spoke of Kennedy’s courage in the battle for civil rights, freedom and peace during a turbulent time in our nation.

But what most Americans will always recall are the images of Kennedy now frozen in time. A youthful leader taken too soon with a legacy sealed by an assassin’s bullet.