Last spring I was working on a writing project about the Numen Lumen Pavilion at Elon University. While I was interviewing a student about the role the building plays on campus he had a question for me. “So, do you talk to students and professors about things here at Elon and write feature stories about it?” he asked.

“Pretty much,” I answered.

I think about that conversation often, especially when I have the occasional but truly rare bad day at Elon — or during particular times when an anniversary passes. Today it’s the latter. Sunday (Nov. 18) marked the two-year anniversary of my last day in newspapers. I made the decision in August of 2016 to leave the business for good and announced it publicly in September. My then-publisher Paul Mauney asked it I would be willing to stay an extra 60 days to get the newsroom through the election and I reluctantly agreed. The truth is, once someone makes up their mind to make a major life change, any delay can be perilous for all parties concerned. I learned from experience how dangerous a short-time employee can be so it made me determined to leave the Burlington Times-News on a high note with dedication to the job to the finish. In my work life, I have always tried to do the best I could.

And so I did, arriving home with a few stray boxes of stuff into a family holiday party of 20 people at the usual time, around 7 p.m. I never really looked back. I have no nostalgia for the news business, even though for most of my 34 years in it, being a writer, reporter and editor were the best jobs I could imagine.

Here’s what I had to compare it to. These are the jobs I’ve held in my lifetime, in chronological order.

Priming tobacco: Multiple summers from age 10 or 11 to 13 or 14. Note, in Stokes County we call it “priming.” Others say “cropping” or, heaven forbid, “picking.” Either way, it was doggone tough work. Pay was meh. Free Nabs and Tru Ade a benefit.

Helping a scuba diver retrieve golf balls from ponds at several regional golf courses: One summer, age 15. Easy work if you could stand the high number of golfers who stopped to ask if any of their golf balls had been located and added, “My name is Titleist.” Same joke every time. Picking out the best golf balls to keep for myself was a value-added.

Reporter, ad paste-up, deliverer for weekly newspaper: One summer, age 16. Set the tone for what was to come. Cokes for 10 cents in the office machine kept me coming back.

Surveyor’s assistant: One summer, age 17. Nothing beats working outdoors and having a great boss. Hot and cold running ticks were something of a drawback.

Yes, working in newspapers as a reporter, sports writer or editor was absolutely the best job I’ve ever had. For more than 30 years I couldn’t imagine doing anything else. Very few lines of work offer the opportunity to meet interesting people, talk to genuine heroes, learn about events before anyone else, tell stories, uncover corruption, improve a community, help those who need it and work amid creative, talented, contrary, funny, intelligent and often slightly deranged people.

But after three decades that wasn’t enough anymore. I first started thinking about a change in August of 2015. Fear of the unknown more than anything else held me back. I wanted a new job, but at age 57 what was out there for someone like me? What would I do until I hit true retirement age? And I also knew I would miss the adrenaline rush of the daily deadline, pursuing stories or finding out what kinds of cool, interesting or disturbing things we might need to report. The work can be oddly addicting.

Ultimately, after 34 years, the work itself became less interesting. And while I never grew tired of serving the community and readers, I became weary of being on call 24/7, nasty phone calls or emails from increasingly agitated people many of them with horrifying views, long days that extended into late nights and the general angst that always accompanies a presidential campaign. Journalism isn’t the kind of job you can take casually. You’re either all-in or probably not doing the best possible work.

So I decided to depart while I was way ahead and with the business still shaky but existing. I’m still not sure how much longer it can last. That by itself is depressing. 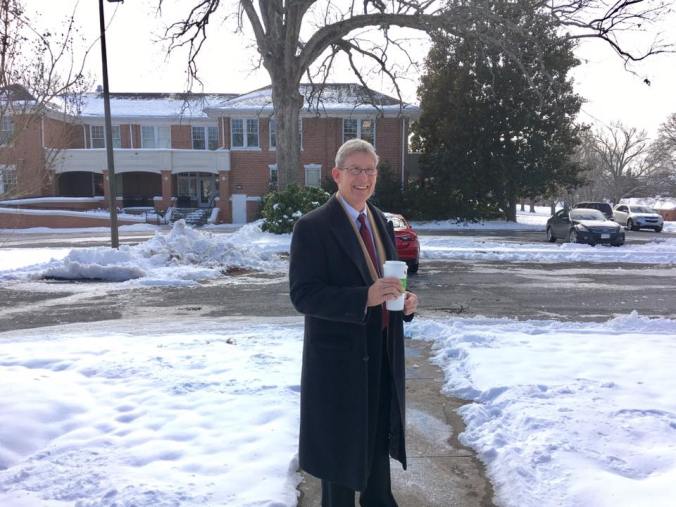 My first day at Elon in January of 2017 was delayed by snowfall. That never, ever happened in the news business. Note, the building where I work is in the background.

Fortunately for me — I’m still not sure how good a deal it has been for Elon — I landed on the campus of a great university. I walk around in a beautiful setting, talk to interesting people, take in though-provoking speeches or panel discussions, write reports, magazine stories and scholarship proposals that can possibility make a difference for Elon and its students. I have the opportunity to work with my wife Roselee again albeit today in a different department and in new roles. I get to see my one-time colleague Keren Rivas every day because she works in University Communications with Roselee. And absolutely no one so far has sent me an email after midnight telling me what  piece of crap I am. The phone messages are much more pleasant, too.

I have also managed to stay involved in Alamance County life. I recently joined the Burlington Downtown Corporation Board of Directors. In December I will take a spot on the board for The Friends of the Library. I’m not sure what I can contribute to either but I’ll do my best.

And I move through my days with that conversation last spring with the student at Numen Lumen Pavilion echoing through my head. “So, do you talk to students and professors about things here at Elon and write feature stories about it?” he asked.

“Pretty much,” I answered.