Two years ago I reached out via a final newspaper column to a person in the Alamance County community who made a profound difference in the lives of several dozen people who were undergoing some hardship. In the process this person, someone I came to call “My Anonymous Friend,” strongly impacted my own life. His seemingly random and anonymous $1,000 donations to those in trouble who were written about in the newspaper, also touched the lives of those who heard the stories, which I shared many times via social media.

He (and while the man’s identity is unknown, the people who work and worked in the newspaper’s reception area know what he looks like) has not been heard from at all since just before I left the news business in November 2016. I hope he is well. Now that two years have passed without word, I think the time has arrived for me to dive back in to this story and see if I can shape it into some kind of coherent narrative. I have most if not all of his letters. I’ll try to update any progress I might make. 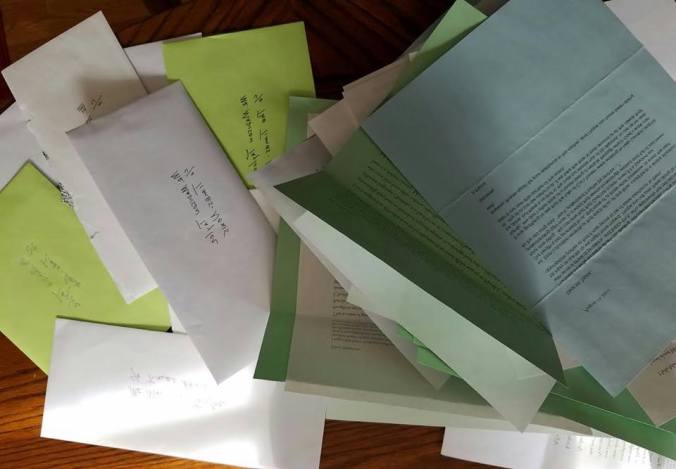 Here’s what I wrote directly to “My Anonymous Friend” two years ago.

First let me say, Happy Thanksgiving to you. As you always like to say, I hope this letter finds you well.

Thanksgiving is a big day on the calendar for me and my family. I feel pretty confident it’s a significant day for you as well. Few things are more important than recognizing the blessings around us and giving thanks for the ones we see and those that might still be hidden, yet to be discovered like a gift behind the sofa on Christmas Day. As you like to point out, we can’t predict what might happen. It may be good. It could be unfortunate. But it will be unknown until events unfold.

This randomness is both a blessing and a curse.

It was a random event, in fact, that made me aware of your existence. It was in the fall of 2011 when a part-time supervisor with the Burlington Recreation and Parks Department named Bobby Erich was seriously injured in a bizarre softball accident we reported in the Times-News. A softball bat slipped from someone’s hands. It struck a chain-link fence and the handle improbably came through the other side, striking Bobby Erich in the head. As he fell, he hit his head on an electrical panel that supplied lights to the field.

This singular event seriously altered the course of his life. He’s never been the same.

Shortly after we published our story in October was when you first delivered a green envelope with $100 bills to our receptionist Vicky Davis at the Times-News. That was when I first learned of the existence of a person I came to call “my anonymous Friend.” The cash arrived with a note addressed to me. In it was a simple request: Find the family of Bobby Erich and deliver this contribution.

Bowled over doesn’t begin to describe how this assignment made me feel. I was confused, nervous, energized, anxious and just a little scared. It was and is a lot of money. I felt a sense of incredible duty and responsibility. It not only had to be done quickly, but correctly.

To say this singular event altered the course of my life for the better would be a major understatement. I’ve never been quite the same.

A few months later, when a second green envelope arrived, I felt all of those emotions again. But I also understood that this might be a partnership we would share for some time to come. I was flattered first and foremost that you had chosen me to be a part of something so special. I was also gratified that the people, fund-raisers or organizations you helped over the next five years were all part of stories published in the Times-News. Sometimes I think we struggle to determine if our work ever makes a difference. Your anonymous donations clearly signal that it does.

I don’t have a strict accounting in front of me, but since October of 2011, I have helped deliver more than $50,000 in donations from you. Often I have asked my colleagues who have written or are somehow a part of the stories that got your attention to help make the delivery. It’s a special moment to share. I felt unworthy to do every single one. Every recipient, and there are dozens, has been grateful, nearly all speechless for a moment or two. Many grasp for a reason why a person they don’t know would offer this kind of help. More than one or two can’t believe I don’t know who you are. I’d say 90 percent leave with tears in their eyes.

Over the last five years, I’ve written about you to others. Many know about your anonymous donations and are inspired by them. I often share the faith and wisdom in your letters with readers of the Times-News and friends via social media. In fact, I still have every letter. People frequently tell me I should turn the entire story into a book. I’m not sure how you might feel about something like that. I’m not sure how I would feel about something like that.

The subject came up last month (October 2016) when I spoke to a book club in Burlington. I told them I would be leaving the newspaper in November. One woman raised her hand and asked about what would become of “my anonymous Friend.” I told her I had given it a lot of thought, that I hoped you would continue to help those in our community who need it. I said I would be happy to try and help in any way I could. I’m not sure what my next job might be, but I’m not leaving town.

I keep coming back to something you wrote in a letter to me in 2013.

“None of us can do everything but all of us can do something. It’s like the story of the man walking along the beach who came across hundreds of starfish that had been washed ashore by a sudden and unexpected storm. He saw a little boy going along the beach and one by one throwing the starfish back into the water. ‘You can’t save all of them,’ he told the boy, skeptically. The boy smiled and said, ‘No, but I can save this one,’ as he continued his work.”

I want to thank you, my Friend, for all you have done for our community and the incredible gift you’ve provided for me over the past five years. And if you ever want to reach me, just ask Vicky at our front desk. She knows where I am.