We created a monster. It’s called “The Big Dinner.”

Now, what came to be known as “The Big Dinner” didn’t start out that way. Not by a longshot. Eight years ago when this snowball was put in motion by my spouse, her sister and her oldest brother it was relatively small. You couldn’t exactly call it a Tiny Dinner back then or even a Medium Dinner. It was some kind of Dinner in-between.

So just how big is it now?

Well, big enough that several people marked it on their calendars nearly a year ago.

So big that 14 people traveled from parts outside of North Carolina to be there.

Large enough that the contingent from Illinois alone takes up most of Zone 3 in a commercial airliner.

Our turkey is so massive it almost required a safety seat during transport from the grocery store.

One group hired a van to bring people back and forth to our house for it.

The number of guests grew to the point that we needed to rearrange the furniture in our living room so the dining room could successfully sprawl into it. For several years we borrowed an 8-foot table from the Times-News breakroom to add enough length to our dining room table so a higher number of people could sit together. This year Roselee, my incredible spouse, saw a couple of long tables on sale at Lowe’s so now we have our own for this annual rite of fall.

But some still ate in the kitchen.

And, well, it’s big enough to have its own Facebook page and event listing calling it, officially, “The Big Dinner.”

About the only thing we don’t have is valet parking.

Yes, we created a monster.

A big and beautiful monster.

SOME PEOPLE are Christmas people. They crank up just after Labor Day and generally go all Clark Griswold by the turn of November. Others are partial to the Fourth of July and put on elaborate fireworks shows at home for family and friends usually well outside the boundaries of state laws. And quite a few are dedicated to Halloween. Call it pumpkin crazy.

I wasn’t always that way. When I was a kid, we had a few Thanksgiving feasts with my aunts, uncles and cousins at my grandmother’s house. But my father always treated it like something he had to get through in order to reach the Promised Land — a football game on TV. Eventually, he stopped leaving the house at all on Thanksgiving. Too much potential blocking, tackling and butt-scratching to miss.

Thanksgiving became something special for me when I met my future spouse — and her father.

I met her dad, a man known as Papa Joe, for the first time on Thanksgiving Day more than 20 years ago. I stopped by for an introduction on my way to work. He was tending his freshly opened Christmas tree lot, sipping coffee and eating a warm cookie. A year later, I was working on that same Christmas tree lot, which was a central part of Thanksgiving for the next decade. It was very much a family affair.

The Fraser firs arrived on the Wednesday before Thanksgiving. We unloaded them and started setting up the tree lot. That night we ordered pizza from a takeout joint down the road and relaxed after a hard day’s work.

Thanksgiving Day, while my spouse and her sister worked in the kitchen, I was with her dad and my brother-in-law finishing anything we didn’t do the night before. By the end of the day, a huge turkey dinner was about the best meal ever.

The only thing missing was my wife’s two brothers and their families. One lived in New York and later Illinois where he’s a chef and restaurant owner. Another lived in New Jersey and worked on Wall Street. Neither could get away on Thanksgiving Day. Their absence was something my father-in-law always noted with melancholy — until a customer would drive up during dinner forcing one of us to go outside and help.

THE FIRST Thanksgiving after Papa Joe’s death was a subdued affair at our house in Burlington with my wife’s sister Annmarie, her husband, Ross and their two now adult offspring Rossi and Ariel. A year later, my brother-in-law Vinnie wondered about the possibility of coming to North Carolina from New Jersey the weekend before Thanksgiving, which would avoid a historic conflict.

We quickly agreed and the Tiny-to-Medium Dinner was born with the addition of Vinnie and his future and now spouse, Tanya. We did it again in 2012. In 2013, Vinnie’s daughter, Megan, decided to come. In 2014, my brother-in-law, Michael and his spouse, Mary Ann, joined the party from Illinois as did Tanya’s sister, Heather and her boyfriend, Sean from the Outer Banks.

Then in 2015 the dam broke: Vinnie’s two sons, Joey and Vinnie, joined their sister, Megan. Michael and Mary Ann arrived with their son, Joe and their twin daughters, Melanie and Michelle who brought their boyfriends. Tanya’s dad was here, too, along with her sister, Bonnie and her new husband, Daniel.

For those counting at home, that’s 23 — by any definition, a Big Dinner. It’s so big we started taking a Big Photo with everyone in attendance jammed in. Below are team photos from 2015, 2016 and 2017. 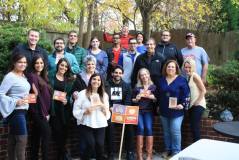 Our eighth Big Dinner weekend. It has become an elaborate and laugh-filled gathering of family that starts on Friday with a pizza party at our house in Burlington — a nod to the pre-Thanksgiving pizza we used to eat at Papa Joe’s in the old days. Only now, Roselee makes the pizza in her outdoor pizza oven. We have a traditional Thanksgiving dinner on Saturday, also at our house. It’s a day of laughter, food, games, and, well, alcohol. And on Sunday morning we collect at Vinnie and Tanya’s home in Pittsboro for a Big Breakfast sendoff before so many people we only once a year depart for the airport and begin their journeys back to Illinois, New Jersey and New York. We hug and say our sad goodbyes and promise to return the next year.

So far most have kept that promise, and then some. This year we had a few new additions, including Michael and Mary Ann’s son Jeff and his girlfriend Erin. Many of our nieces and nephews now bring boyfriends or girlfriends. It’s not uncommon for someone to invite a friend to join us. This year Roselee’s college roommate was one of our guests. Maria has attended a few Big Dinners and I expect her to be at more in the future.

The total number of folks Saturday was our highest yet — 25. It was a monster of a crowd, a big, beautiful and loud monster.

And somewhere I know Papa Joe was smiling. 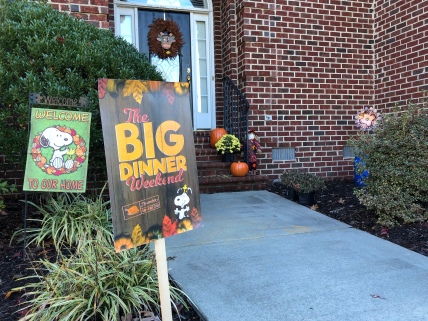 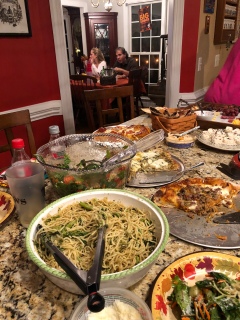 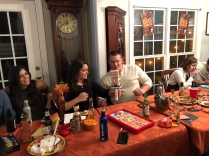 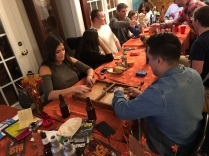 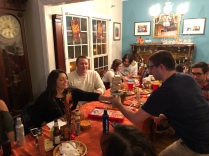 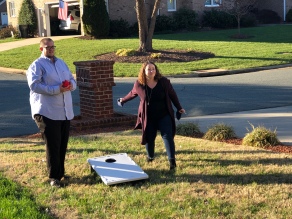 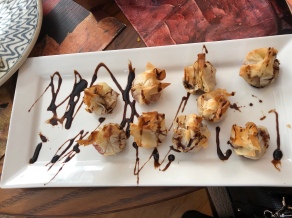 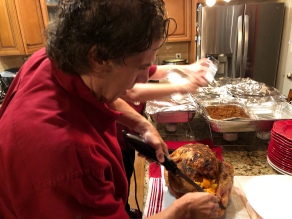