Summer started today, bringing an anti-climactic end to pretty dreary, rain-infested late spring here in North Carolina. The Haw River was nearly out of its banks Tuesday morning after a torrential downpour that almost outweighed a tropical system in intensity, and density.

So even though muggy and not very comfortable was the rule today as the last light of day disappeared at around 9 p.m. on the longest day of the year, we can only hope to toast a better more hospitable summer. And since I wrote about the winter seasonal, Snow Hands, offered by Haw River Farmhouse Ales as the seasons changed in March, June 21 seemed like an appropriate time to dash off something about Sun Hands, the spring / summer ale available from April to August from the brewing artisans at Haw River Farmhouse Ales. 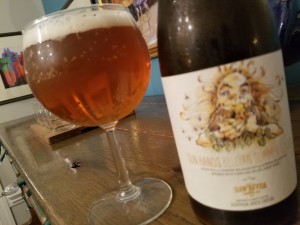 Like Snow Hands, it’s brewed at Saxapahaaw, N.C. home of Alamance County’s only craft brewery at the moment. As mentioned previously, Haw River Farmhouse Ales is a novel brewer. It specializes in Belgian-style ales, brewed using locally sourced ingredients when possible in the tradition of Belgian farmers. It’s a company that understands the history of crafting ales, centuries of history are rolled into that enterprise. Haw River isn’t afraid to gamble a little using unusual ingredients. It’s a high-risk, high-reward way of thinking. It works well for them and keeps things interesting.

Snow Hands, for example, is a wonderfully developed ale with a combination of flavors emblematic of the wide-variety of conditions common to North Carolina’s winter. It’s an intriguing beer, right down to the delightful art on the label.

Sun Hands has the same distinctive art, the same strong ABV (10) but a different mission. Where Snow Hands is a complex journey for the palate, Sun Hands is far more of a traditional Belgian ale in the style of Trappist monks – yet not quite so sweet as the European counterparts. It accomplishes the primary goal, though, of any summertime brew — it’s refreshing. On the hot days ahead, this will go down well. It’s a hoppier variety than old-school Belgian ales concocted by using locally generated wildflower honey — providing a smooth finish to accompany the hint of flowers. A house abbey yeast strain is part of the fermenting process, according to the brewers then it’s dry-hopped before bottling with hops grown in the U.S. and Southern Hemisphere. Dry hopping is when hops are steeped in beer between fermentation and packaging — a process commonly used in IPAs.

Sun Hands is indeed a surprising variation on traditional Belgian strong ales. I want to thank some social media acquaintances for recommending it after they read my post about Snow Hands. I’ll try to keep a bottle or two of it on hand for those days when the temps creep toward triple digits.

For those interested, it should be available at the Haw River Farmhouse Ales tasting room for another couple of months.The tasting room is at 1713 Saxapahaw- Bethlehem Church Road. It’s open year-round 4 to 9 p.m. Tuesday through Thursday; 2 to 9 p.m. Friday; and noon to 9 p.m. Saturday and Sunday.

For people in the Burlington area, it’s stocked at Company Shops Co-Op on Front Street.

One thought on “Sun Hands: A refresher from Haw River Farmhouse Ales”