I was out of college nearly seven years and in journalism for six of them when I got the audacity to write a letter to Sports Illustrated in search of a job. I was working as a sports writer for the Burlington Times-News at the time — 1988 — and was going nowhere fast. Back then, jobs didn’t come open often in sports departments at larger North Carolina newspapers and when it did happen the competition was fierce. The ACC was truly in its basketball heyday. North Carolina was the place to be.

So I was stuck, miserable and didn’t feel like I had much to lose. So what did I do? Sent a letter to the managing editor of the most significant sports publication of its time. Mark Mulvoy answered by asking that I submit something for possible publication. They had some features back then that included first-person perspectives, items about books or movies, etc. I chose a book review. As I recall it was of the ACC history book written by Ron Morris, a former Durham Herald sports writer. I wrote it, then rewrote it, then edited it a few dozen times before sending it to the person Mark Mulvoy suggested, someone I had never heard of before: Jane Bachman Wulf.

After a few weeks of anxiously awaiting a response of any kind, one arrived in the mail at my apartment across from Pine Hill Cemetery in Burlington. Jane Bachman Wulf, the chief of reporters for Sports Illustrated didn’t have great news for me. But as rejections go, it was the best one I ever got — and believe me I got a bunch of them. I’m something of an expert on the form.

It took great skill and thorough understanding the nature of writers for her to take the time to say no but not leave me despondent and discouraged. No, they weren’t going to publish the book review (unsolicited reviews aren’t usually published, even though that was one of the things I was encouraged to submit). No, they had no job at the moment. Yes, my writing wasn’t half bad and might actually be something one day.

I still have that letter from nearly 30 years ago. I looked for it Sunday after reading in the most recent Sports Illustrated that Jane Bachman Wulf had passed away at age 62 after a three-year battle with pancreatic cancer. I hadn’t thought about her or the letter in years, but when I saw the name I knew immediately who she was. Jane Bachman Wulf, hired and developed dozens of the best sports writers in the nation in her time with SI (she finished her career at Time). She was extraordinary at her job and even better at dealing with people. Her friends called her Bambi. I wish I was one of them.

As I think back on that letter and what it meant to me during that fragile period of my lfe — it truly kept me going at a time when I was prepared to chuck it all and go work for, hell I didn’t know and didn’t really care. That letter made me care again.

It didn’t surprise me Sunday night when I found a blog post by Joe Posnanski about his letter from Jane Bachman Wulf. Joe actually went on to become all the things I had hoped to be, but when he first wrote to Sports Illustrated he was a high school kid in Charlotte looking for advice and a leg up in the business. This was 1985 and she wrote him a fabulous note. Joe, of course, went on to work for several large newspapers, covered high level college and professional sports, ultimately worked at Sports Illustrated and is a successful author of sports nonfiction books about Buck O’Neill, Joe Paterno and the Cincinnati Reds. Unfortunately, he never met Bambi Wulf either.

But like hundreds of others he was touched by her kindness. I know how he felt. 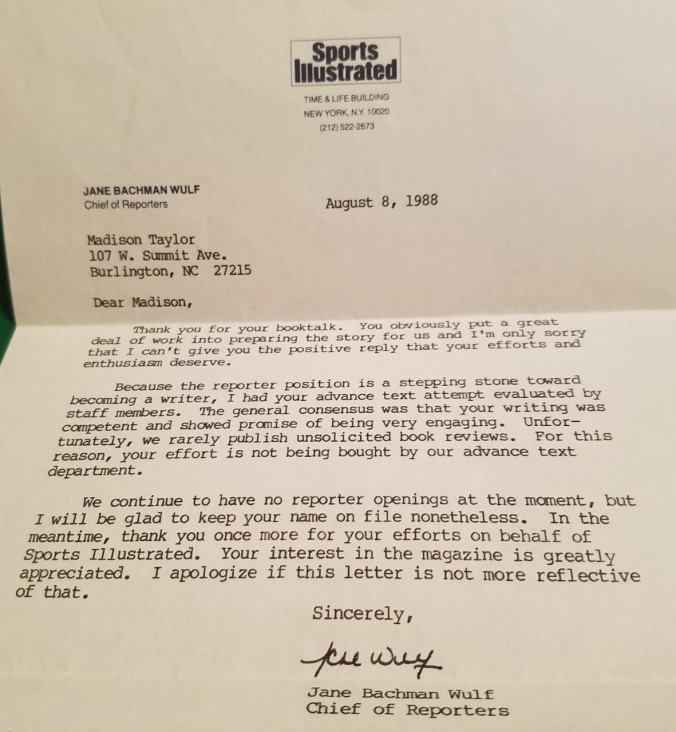