History has dark corners. I think most are aware of this, even if they choose to ignore it. Ignorance is always easier.

Family histories are particularly tricky. This is because the narrative is controlled, handed down generation to generation, until it becomes a specialized truth. And some things are just flat ignored, falling in the better-not-to-know category.

My friend and historian Walter Boyd runs into this often. Walter is a detailed researcher and chronicler of the history of Alamance County, where I live now. When I was editor of the Burlington Times-News he would occasionally write stories looking back at quirky, controversial or violent things in local history. These stories were very poplar but almost always touched off a call or two from someone whose ancestor was part of the story telling us we had something way wrong. I would refer them to Walter who — again detailed as he is — would write down their account, but also point out that records from the time had things portrayed a little differently than the family’s in-house stories. Records like city, town or county documents, court transcripts, newspaper reports and almost anything else he could find. Walter is always thorough, which is why his history of Alamance County is unfinished, highly colorful and already checks in at a couple thousand pages at least. And he’s far from finished.

I was reminded of this again on Thursday (that’s Nov. 29, 2018) when I attended one of the Thursday Inspirations held weekly at Elon University’s Numen Lumen Pavilion. I’ve written about the Inspirations before and you can read it here. In short, it’s a great 20-minute or so program featuring music and a speaker from one part of campus or another. This year’s theme is “authentic identities.” The speaker this week was Libby Coyner, an archivist and assistant librarian at Elon. She spoke of growing up in the western part of the United States but having roots in West Virginia and the pitfalls that can be found by visiting an old homeplace or going through historical documents. Often we find out things we would rather not talk about or had no idea happened at all. Living with what’s found and not being defined by it creates an interesting dynamic — I think one we see each day in our culture.

After the Inspiration I introduced myself to Libby and told her that as a writer and former newspaper person I couldn’t help but look things up — like a historian or archivist. I simply can’t ignore what I find but try not to dwell on things over which I had no control and have no bearing  on who I am today. I was also reminded of a previous post here about my great-great grandfather who was a captain in the Confederate army during the Civil War. I called this one, Son of a son of a son of a Confederate veteran.

I had always known that my great-great grandfather, someone who died well before my time, was a Confederate veteran. What I never knew until around 2013 is that there was an incident after the war in which he shot a man who was, according to a published report, creating a disturbance at an inn he owned in Danbury, North Carolina. The incident occurred in 1888 and was reported by a now long-gone newspaper, the Union Republican in Winston — that’s Winston before the Salem became attached to it by hyphen. For me the matter was further complicated because the man my great-great grandfather, Spotswood B. Taylor, shot was black. Under the headline “Shooting in Danbury” was this:

“Last Wednesday evening Mr. Spot Taylor of the Taylor House had difficulty with a (negro) who became offensive and refused to leave the premises when ordered away. … Spot drew a pistol and shot him twice, one ball taking affect in his knee and the other amputating a finger.”

Now this news never once came up at family gatherings, even though a portrait of him resides above the fireplace in the house where I was raised. I should have suspected he fired a gun a few times since he was a captain during the Civil War. In war, people get shot. That’s how it goes.

Only this incident was years after that. I also know that before and after the war, people still got shot, and sometimes for little reason at all. In particular, black men were killed under questionable circumstances and still are in America. This a modern-day tragedy.

This startling historic note about the man we only knew as “Spotswood B.” was collected by a cousin. Charles Rodenbough who is a historian by avocation and a good one. My great-aunt Grace was his stepmother. When my aunt Grace died, Charlie’s dad then married my widowed grandmother. 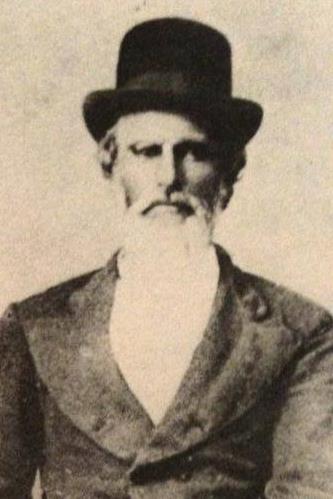 My great-great grandfather Spotswood B. Taylor at about the time he shot a man, an incident that occurred in 1888.

I asked my brother, who is named for the late captain, if he had ever heard about Spotswood B. shooting a man. He had not.

“Did he kill him?” my brother asked.

“Nope,” I responded, “Spotswood B. was either a great shot, or a pretty lousy one.”

I couldn’t find any more details about the shooting. There was no arrest or legal action of any kind — also not surprising in that more rough and tumble time when people took matters into their own hands and white men were in charge of everything. But to me it’s a troubling family episode. Up to that point, most of my knowledge about family history came via stories told by my late father and grandmother. And there was a good bit of it to know and much of it positive or glowing. That’s how family histories go.

I was aware, for example, that my ancestors were landowners, back in the days when that truly meant something. I knew that at one time Spotswood B. operated a hotel in Danbury (the previously mentioned Taylor House) and his son, J. Spot “Papa Spot” Taylor, with others in the family ran a resort near what’s now Hanging Rock State Park at a natural mineral spring, a hotel that later burned down and was never replaced. People came from miles around to sample the water’s curative effects and take in the mountain air. “Good for the stomach and for women’s illnesses,” the advertisements read.

I was also aware that many of my kinfolk were pretty accomplished. My great-aunt Grace was among the first women to serve in the N.C. General Assembly. My grandfather was elected to the state House for one term and my great-uncle John was sheriff of Stokes County 20 years. My great-uncle James Spotswood Taylor graduated from Johns Hopkins Medical School and was a leading pathologist in the nation before keeping a promise to his late wife to maintain the first health department in Stokes County.

My ancestors were leaders in politics, business, agriculture, medicine, faith and education — not one ink-stained wretch among them on the Taylor side. My great-grandfather “Papa Spot” Taylor was recalled upon his death as the most popular citizen of Stokes County and at one time the third-largest grower of flue-cured tobacco in the world. His spouse, a woman I knew when she was in her 90s as “Mama Nellie,” was the daughter of famous Quaker evangelist Mary Pemberton Moon, for whom a room is named at Guilford College. She was a devout Quaker who arrived in North Carolina from Kansas by way of Indiana. And while she frowned on dancing at Piedmont Springs resort and her husband’s business in tobacco, she learned to live with it.

My great-aunt Grace, who I mentioned earlier, served as executive director for the National Red Cross before being elected to the state House seven times. She was an advocate for education and for involvement by women in government and business.

My cousin’s compilation of history was eye-opening in another way, too. I learned, for example, that my name was almost Meredith. This sounds to me like the kind of name that for a boy could lead to a great many playground disputes, which would almost certainly evolve into outright fisticuffs back when I was growing up in the 1960s and ’70s.  Apparently my grandfather, for whom I am named, was aware of this. Sometime well before even the birth of my own father he changed his middle name to Madison.

And while I will never be as accomplished as some of my Taylor ancestors I’m also reasonably sure I will never shoot anyone, not without good reason anyway. Let’s put it this way, I have no plans to shoot anything at all. And in the matter of family history, or any history for that matter, learn to live with the good, bad and ugly of it.

But just don’t call me Meredith.