UPDATE: Earlier this year I posted the story below with videos about a wonderful program on Thursday mornings at Elon. The fall schedule is now underway for the Thursday Inspirations at Numen Lumen Pavilion. The theme this year is “Authentic Identities.” Thursday Sept. 6 in the Numen Lumen Sacred Space Dr. Alan Russell, associate professor of mathematics, will speak on the subject of “An Authentic Life: By the Numbers.” I bumped into Chaplain Emeritus Richard McBride earlier today and he recommended going to hear the professor. It starts at 9:50 a.m. and ends with coffee and snacks.

The rest of the fall schedule reads like this:

I hope to see more people there. For more information about the Thursday Inspirations, read on …

I work in a place with dozens upon dozens of hidden gems. Some are in plain sight. Others are more difficult to find. And a few exist in the background just waiting to be discovered.

The Thursday Inspirations at Elon University aren’t a secret, at least not to faculty and staff. We receive weekly reminders when the short presentations are offered — from September through April — the beginning and end of the school year. For students who don’t monitor Elon’s website or receive faculty and staff email, the Inspirations are more of a mystery. I spoke to an Elon junior the other day who had never heard of it. I’m sure she’s not alone.

I was aware of the Thursday Inspirations from my first weeks at Elon. But it took more than a year to actually attend my first one. I did so because of a work assignment. When the project was complete, I returned to the Numen Lumen Pavilion Sacred Space  each Thursday at 9:50 a.m. to listen to a speaker from one part of campus or another and hear a musical selection performed by an Elon student. The weekly presentations take 20 to 30 minutes, followed by coffee, juice and pastry in the adjoining McBride Gathering Space, named for Elon’s chaplain emeritus.

Essentially I became a regular at the Inspirations. I bumped into Dr. Bob Carter, a retired physician in Burlington, each week. I saw many of the same faces in what is a small but loyal gathering of faculty and staff. The speakers during winter and spring terms were from all areas of campus — students, faculty and staff. The messages shared are often personal, reflective and inspirational. Elon University Chaplain Jan Fuller calls them “Beautiful little moments.” I have to agree. The Numen Lumen Pavilion, home to the Truitt Center for Religious and Spiritual Life, is the campus multi-faith center. The weekly Inspirations aren’t always religious and usually aren’t. They aren’t usually political but sometimes are. There is no preaching involved or proselytizing. They are casual messages delivered from the heart and often accompanied by brilliant song or musicianship. This year’s theme was “What Now? Reflections on Resilience and Change.”

Elon’s 2017-18 school year ends this weekend with commencement. The Thursday Inspirations series wrapped on May 3. The penultimate Inspiration on April 26 was a rousing speech from Dr. Cherrel Miller Dyce, an associate professor of education and advocate for social justice. An immigrant from Jamaica who lived in Canada, Dr. Dyce spoke of her own encounters with discrimination and hardship as well as those who influenced her life. Her message dovetailed with a gospel song performed by Elon student Lana Logan with the line, “When you’ve done all you can, just stand,” which is from the Book of Ephesians. Dr. Dyce told the gathering that standing in the face of change is an act of resilience.

“The song is a reminder that we need to take a position, a stance. … I’m suggesting you stand, not physically. I’m asking that you stand with a purpose. Standing allows us to examine who we are, our relationships with others and our role and proximity in maintaining systems of oppression,” Dr. Dyce said. “The answer of ‘what now’ is for us to stand.”

For Dr. Dyce the importance of taking a stand is rooted in her childhood. “I am the evidence of a family who Stood in the face of change:  change in immigration status, change causing family separation, change producing fear, and changes that promoted hope and resilience.”

“You see, my anchor is my faith, not my degrees. My faith informs the work that I do in education and by extension my research, teaching, and service.  So in full transparency and humility, I am leaning on the IT FACTOR that has allowed me to navigate change and promote resilience—- and that is my faith.”

To see more check the video below.

The appearance by Dr. Dyce was one of the very peaks amid a string of high moments. I was touched and inspired by a story told by C.C. Cowan, a 1986 Elon grad who is manager of moving and set-ups for the university. Over a period of time he lost the ability to see due to childhood macula and adult Stargardt’s Disease. His story was alternately sad, humorous and real as he recounted a descent into darkness and how that altered his perceptions and those around him. It was a beautiful, intense and poignant moment — a man’s acceptance and resilience laid bare. Because of my own struggles with vision I found his Inspiration to be very profound and his journey compelling. Ultimately, he told the gathering, he turned into a new person – one who is more patient, compassionate, understanding and less judgmental.

I have that video, too. It’s also worth watching.

There are too many highlights from the past few months to touch on them all. One of my colleagues in University Advancement, Ginny Brown, spoke of how her Christian faith helped her overcome a two-year period of homelessness. Alex Gruber, a member of the Class of 2018 spoke of his struggles as one of only four Jewish students in his school growing up and the bullying that ensued.

“Much of the anti-Semitism I experienced was by immature kids that didn’t know the harm they could cause. If anything the adversity and dissonance I experienced only furthered me down a line of inquiry to discover who I was and what was important to me,” Alex said.

Esther Freeman, one of the first people I met after starting work at Elon last year, addressed growing up as a Latina in New Jersey and being influenced by others to be someone else. Esther is the outgoing head of Elon’s Odyssey Scholarship program, which offers high-achieving students with financial disadvantages the opportunity to attend college. She told the Numen Lumen gathering: “What would your life be like if you used the energy you spend hiding who you are and focused that energy on living authentically and pursuing your life’s purpose?  Are you ready to embrace the power of your truth?  If not now…When?  Someone out there is waiting on you.”

Brandon Bell, assistant director for the Center for Race, Ethnicity and Diversity Education offered a short burst of Sam Cooke’s song, “A Change is Gonna Come” and said “In my mind you can’t establish resiliency without being able to change. The marker of our resilience will be indicated by both our willingness and s and action to make the living experience better and reshape our national understanding and make the living experience better. We must change.” 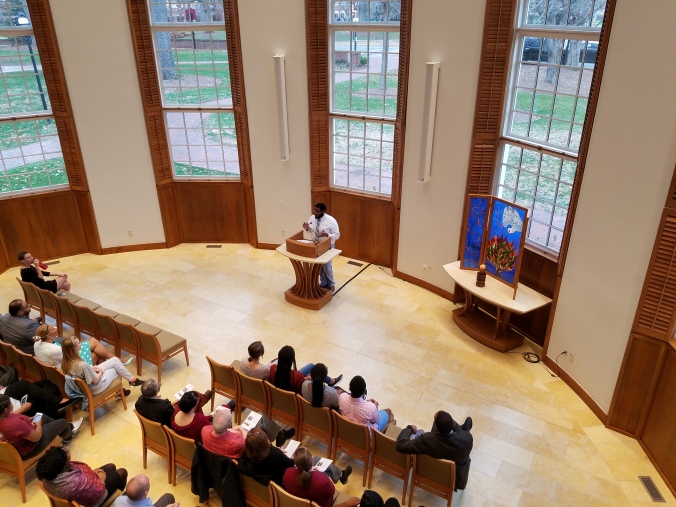 Brandon Bell at a Thursday Inspiration.

Elon student Ozelle Bower spoke about change and resiliency in relation to moving from Fiji, a place where she walked barefoot every day, to Oakland which had one of the highest rates of violent crime in America. Then she moved across the country from metropolitan Northern California to tiny Elon, a major cultural shift. Be who you are, was her message.

The stories are why I find the Thursday Inspirations important. It’s an outlet into multiple ways of viewing the world from a variety of faiths, ethnicities, genders and ages. The Inspirations are also a window into worlds I don’t see every day. One of the Inspirations this year was the Yom HaShoah Ceremony of Remembrance for the Holocaust. More than 60 people were there. It included traditional Jewish music,  powerful readings about the Holocaust or stories of students who visited the Nazi death camps as part of their studies abroad. Rabbi Meir Goldstein closed this portion of the observance with the traditional Mourner’s Kaddish in Hebrew before leading a group to another part of campus where names of just a fraction of the dead will be read over a four-hour period. An Elon student from North Carolina attended the gathering is clearly moved by the experience. “I’ve never witnessed anything like that before,” he said. 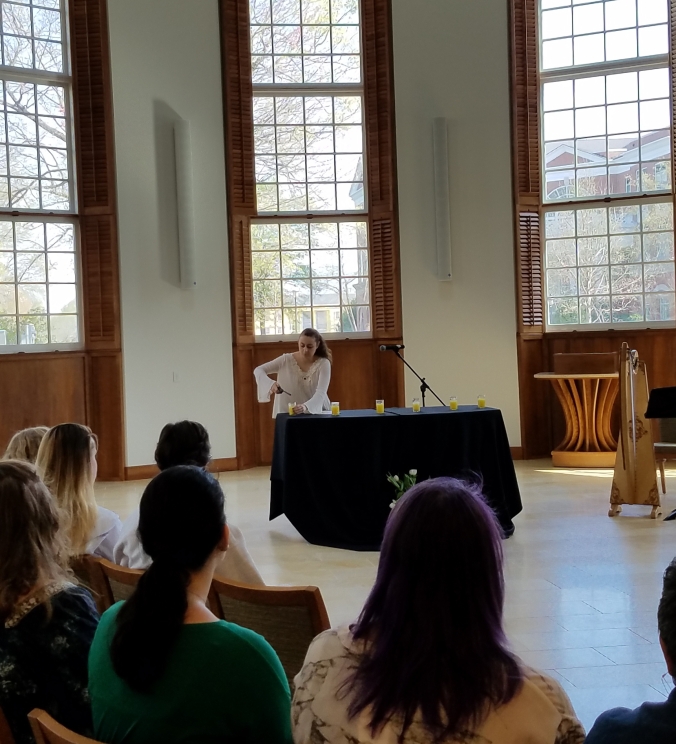 Candle-lighting at the Holocaust remembrance.

And I’ll end with my favorite quote from the winter and spring Thursday Inspirations. Gruber told the audience: “A mentor on my Israel journey once told me that the reason they call the Dead Sea, “dead” is not because it’s too salty to sustain life. He said that as the lowest point on earth it only has rivers that flow into it and nothing flows out. The lesson here is that something that only takes and never gives isn’t truly alive. We are not here alone. We are given the opportunity to care for, share with, learn about and support each other. To lift each other and never let go of what truly connects us.”

That’s a message I could hear every day.

7 thoughts on “Updated with fall schedule: A source of Inspiration at Elon”