Not quite the norm.

So how did we come to be enjoying what was basically my birthday present from 14 months ago on a fall afternoon more than a year later in 2018? As an old newsroom friend of mine used to say when something weird happened on his watch at the copydesk, “That’s just how it worked out buddy.”

The gift was an inspired one so most can determine that it came from my wife Roselee. She presented it in an envelope on Aug. 12, 2017 so that part was right on time. It just took a while to become fully realized. Busy schedules cause that in 99 out of 100 cases. And yep, scheduling even between two people isn’t always simple. It’s especially difficult when one person is working a full-time job while going to graduate school (Roselee). Between studying for the GRE to gain admission into Elon’s grad school in strategic communications and all the course work that landed in her lap as classes began, our free time on weekends basically came to an end. She’s making the most of going back to school and I support her all the way — and then some. She’s doing very well, too. I knew she would.

On those rare occasions when we were free, well, the event Roselee bought us passes for — the Taste Carolina Gourmet Food Tours — were already full. The food tours are basically afternoon and early evening deals limited to groups of around 18 people. The tours occur in North Carolina’s largest cities that boast interesting downtowns. The idea is to visit restaurants, microbreweries and bars in a handful of blocks and experience what those areas have to offer. It’s a great idea and something I had never heard of prior to receiving the envelope from Roselee. In every way it was the perfect birthday gift. I think at this point in our lives we both agree that our house has more than enough stuff. Like the Millennials — currently my favorite of all the so-called generations identified in American culture (including the Boomers where I allegedly am categorized) — we enjoy experiences rather than objects. We like to go out and see or do new things, try new foods and drinks or visit places we’ve never seen. Beats collecting dusty old antiques all to hell.

The food tour I received for my 58th birthday featured downtown Durham. It’s an area we don’t know well. We go there every so often for Durham Bulls games or shows at DPAC. Typically we eat at Tyler’s Taproom, which is quick, simple, tasty and convenient to both sites. But we have visited Pizzeria Toro once and loved it. I wouldn’t call us foodies, but we like to be a little adventurous when it comes to restaurants. We enjoy locally owned places that use fresh ingredients and where there is a little bit of flair.

We scheduled our visit to the Durham tour a couple of weeks ahead of time — daring the weather to cooperate, and it did. We arrived at the meeting spot, the visitor’s center in downtown Durham and walked with our group to the first site — Pizzeria Toro. Even though we are familiar with it from one previous visit, we could hardly argue with the selection. It specializes in wood-fired pizza but with enough twists to make it more than memorable on any occasion. 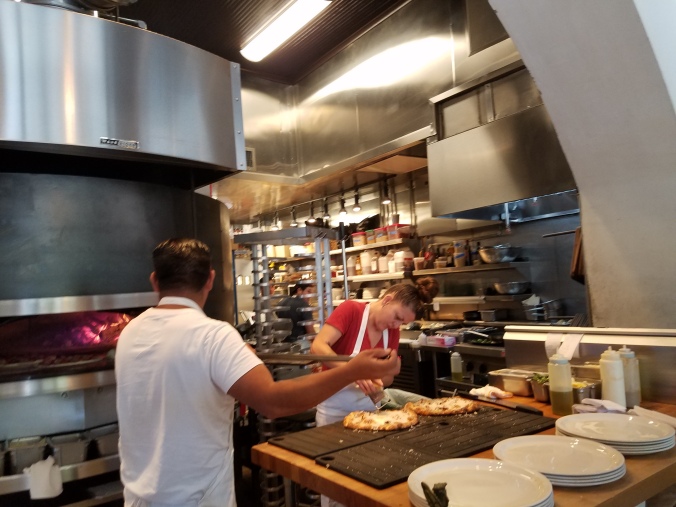 We were seated at a long table outside of the main dining area with a great view into the kitchen where we saw our pizzas assembled and baked. We each had a glass of red wine at our place settings and we got to know others in our group. It included a large collection of people who were friends and family members from Raleigh, three people from Holly Springs and a recently retired couple who had just moved to Chapel Hill from New Hampshire. We compared notes and chatted with all of them at one stop or another. A manager for the restaurant gave our table a history and background about the place and a few cool facts about the pies in front of us. I think there were three in all.

At our area we were treated to a vegan pizza. Roselee told the tour organizers I would prefer no cheese, which is true. But it’s also true that there are a few mild cheeses I will eat. I wouldn’t ordinarily use such a meager personal preference to hinder others on the tour and won’t on future visits. All of that said, though, the vegan pizza was fantastic. The mushrooms were delicious and the crust incredibly crisp but not too dry. Pizzeria Toro knows what it’s doing. Stop No. 1 was a success.

The fact is, in one way or another all of the stops were rousing successes. Our tour guide, Kat, led us the short distances from one site to another. At one point she stopped by the landmark Durham Bull so people could have their photo made with it and talked a little about the history of downtown Durham. It’s had a twisted past of great success, desertion and renovation / reinvention. It’s now a fantastic place to visit with an eclectic mixture of entertainment or art venues. On this day we would only see a portion of it.

Our second stop was just around the corner from Pizzeria Toro — Jack-Tar & The Colonel’s Daughter. It provides an interesting take on the old all-day diner concept — it even offered breakfast all hours — with with intriguing twists. No surprise there. It’s owners are also connected to Pizzeria Toro. Our two tables were served the same appetizer, a combination tortilla chips with either spicy sauce or guacamole, minced chicken topped by eggs. The tortilla, sauces and chicken were very good indeed. I passed on the egg. we also had a glass of white wine each.

Next we walked to Alley Twenty-Six, a bar with lite-bite fare. We were greeted there with a cocktail and asked to guess the liquor used to concoct it. We were also given bread with a nice pimiento cheese spread or spicy nuts. I had no idea what the drink itself might contain but it was refreshing and tangy. I was surprised to find that it was a classic gin and tonic only the two ingredients are locally produced. Excellent.

Probably our favorite stop came next. We loved everything about Dashi, a Japanese restaurant with two distinct parts: A ramen shop and an Izakaya. The Izakaya is the bar area located on the second floor and its where we were led. We enjoyed sake and possibly the best chicken wings we’ve ever tasted. We certainly want to go back there and visit the ramen shop on the first floor. It sounds like a hearty and flavorful take on a Japanese favorite. It was explained that in Japan residents crowd into ramen shops, often leaving lines. People are encouraged to eat quickly so others can also be served. It’s a nonstop process.

Piedmont Restaurant was next on our tour, the final restaurant stop and our longest walk. Again, a glass of wine awaited us in the bar area where we sat at several bistro tables. Piedmont is a dedicated farm to table restaurant with an emphasis on all locally produced meats and vegetables. The only exceptions are seafood items and those are delivered from the North Carolina coast. Close enough. For those eating cheese, the sample was vegetarian lasagna. My Italian spouse pronounced it excellent. I got what appeared to be a menu item, pork hash. It was a fantastic blend of pulled pork and seasonal vegetables, including greens, squash, apples and sweet potatoes. I loved it.

Our tour ended at the Pour Taproom for a quick beer and cupcake. It has a fascinating number of beers on tap. Customers could purchase a wrist band and help themselves to any of taps, which were monitored digitally by the ounce. Patrons could settle up at the end of the night. We didn’t partake of any additional brews outside of the one we were offered as part of the tour. But I would love to go back and do some serious sampling. 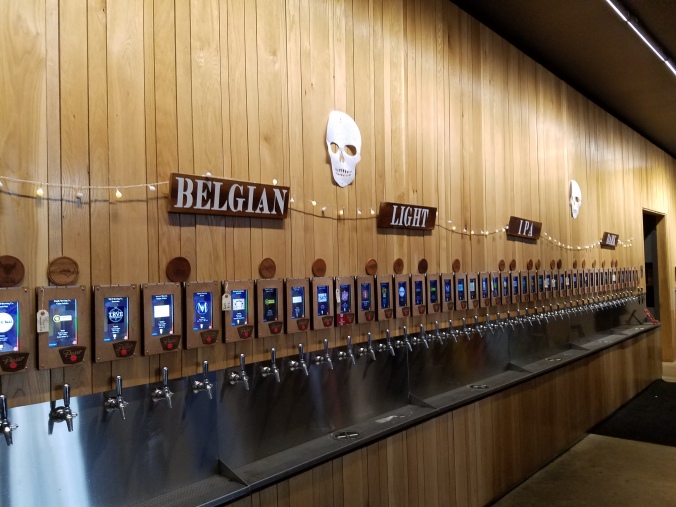 Going back is probably in the cards for a few of the sites we hit in Durham along the tour. We’re going to see “Hamilton” at DPAC later in the month. Now other restaurants besides Tyler’s are definite possibilities. Our two favorites from the day would be Pizzeria Toro and Dashi.

Our biggest takeaway was about the Taste Carolina Gourmet Food Tours themselves. If we can find the time we will likely try all of them. At our current rate, that should take about 10 years. Tours available in the following cities:

One thought on “Tasty adventures in North Carolina’s downtowns”