The thing about working as a volunteer at the polls, especially during early voting, is that you get to meet and talk to a lot of people. Many of them are people who don’t all think alike. Some in fact, are very different. So you converse with them, learn about their families, jobs and lives. You share thoughts about simple day-to-day questions about places to eat, good deals in town, shortcuts to get from one point to another, the cheapest place to buy gas, families, caregiving and where kids go to school. Common ground is usually at hand. It’s not hard to find. Try it sometime.

Polling places are also where it’s easy to rediscover a few important facts that have been misplaced in the nation’s collective loss of consciousness that has evolved over the past 20-plus years. First and foremost, people of different political parties than yours aren’t demonic presences. They’re folks just like you trying to get through life the best way they know how. Just because they have a sign for a candidate in their yard that you don’t particularly support doesn’t make them the enemy, ignorant, evil or crazy. If you stop to listen, they might have a point. Shockingly you might actually become, you know, friends with one or two of them. Try it sometime.

This simple truth is among the things lost in the murky prism of social media, the internet and non-stop cable TV media coverage featuring political oportunists seeking to score points by stirring the boiling pot with conspiracy theories, race-baiting and observations that are misleading at best, outright fabrications at worst. We forget it’s too easy to demonize those we disagree with when we don’t have to look them in the eye and hold a real conversation. Trapped in silos of our own creation (the term “like-minded individuals” comes to mind), many today turn their individual antennae down to zero when it comes to opposing or even slightly different  points of view.

The last couple of weeks I have worked as a volunteer at the Holly Hill Mall early voting site in support of the education bond referendum, which calls for voting yes to a new school and renovations for others in the Alamance-Burlington School System, new facilities at Alamance Community College and a quarter-cent sales tax that would help pay for these necessary projects. So far, I have had largely positive feedback on the bonds. Only a handful in the five days I worked the polls had something obviously negative to say about the proposals. A few walked briskly by, ignoring all of the volunteers no matter the candidate, issue or party. But most pause to say, “We’re voting for that” or “We have to do this.” A lot of people seem to understand the schools themselves are in poor physical shape and in need of a makeover. I am happy to say that the support cuts across partisan boundaries. I have met Republicans, Democrats, unaffiliateds and independents wwho express endorsement for the bond referendum, including the sales tax.

The sales tax element is essential and the part of the “vote three for education” slogan that draws the most questions. The quarter-cent sales tax keeps the property tax burden lower and will be less expensive for Alamance County families over the long haul. The tax, which does not include groceries or gasoline, will impact county residents but also all of those eating at restaurants or shopping in retail stores. This means a good chunk of our school improvements will be paid by people who don’t live here. I’m talking about folks who work at Elon University or LabCorp who reside in Durham, Greensboro, Winston-Salem or Chapel Hill and eat lunch or shop here in Alamance County. I’m also talking about interstate travelers who stop to buy something at Tanger Outlets or Alamance Crossing Shopping Center. We can use their help.

I’ve discussed this with a handful of voters who have questions about the bonds. I’ve had tremendous help during my shifts from candidates working the polling site for their own political races. Republicans and Democrats are joining my unaffiliated voice. Steve Carter, a Republican candidate for the county board of commissioners, is among the best advocates I can count on. Steve is a well-established conservative voice in Alamance County and one-time head of the local Tea Party movement. He will never be confused with the stereotype of a big-spending liberal scorned by many conservatives on social media in our highly charged political culture today. Steve is a guy with a banking background who actually visited the schools. A one-time bond opponent, he saw the need and now supports the bonds. He’s not afraid to tell voters that either. As I have stopped voters and provided literature, Steve has chimed in with his support and explanation about why they must also vote for the sales tax. It’s the best way to pay for the bonds, Steve says. He makes a great case.

Steve also likes to let voters know that every single local candidate running for office — except for one — has publicly endorsed the bonds. They are a mixture of Republicans and Democrats. The Times-News made the same point in an excellent editorial published on Oct. 28. Bond support crosses all partisan barriers. The point was emphasized by a full-page color ad in the Times-News the same day showing the Republicans running for office who support the bonds — including Board of Education member Allison Gant, who was curiously left off a Republican Party card listing GOP candidates, even in non-partisan races. I understand this sorry omission was engineered by current county commissioner Bill Lashley, who does not support the bonds. The full-page ad was paid for by current N.C. House Republican Rep. Dennis Riddell. Thanks to Dennis for correcting what was obviously a wrong. By the way the candidate who doesn’t support the school bonds is Bridgette Yeager, who is ironically running for Board of Education. Go figure.

Quality education in our community is not a partisan issue and I’m happy to see that many of varying points of view can come to agreement about it. The old cliche is that more things unite us as a community and as Americans than divide us. I have wondered in recent years how true this might still be. But if we can reach agreement on something like the $150 million bond referendum, what else can we accomplish? 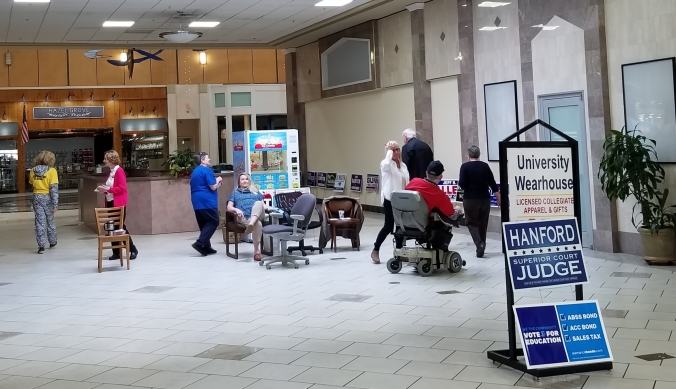 The past few weeks I’ve spent time with candidates or relatives of candidates for most offices on the local ballot. I’ve spent several hours with Republican Commissioner Amy Galey’s father-in-law, Allison Gant’s mother-in-law and Republican judicial candidate Pat Nadolski’s mother-in-law. I’ve spoken to Democrat judicial candidate Andy Hanford, state House Democratic candidates Elliott Lynch and Erica McAdoo. I reminded Board of Education candidate Ryan Bowden to leave some campaign literature on the center desk at the mall because someone stopped by looking for information about the candidates and I could find nothing to give the young woman about Bowden. Wednesday I encountered Republican state Rep. Steve Ross, Democratic County Commissioner Bob Byrd with his spouse Barbara and board of education member Tony Rose (I also saw Tony’s mom and dad, too).

I’ve spent several hours shooting the breeze with candidates, their relatives or friends for the past three weeks. No matter the political affiliation, we all got along just fine.

Give it a try sometime. You never know what we might accomplish working together every so often.