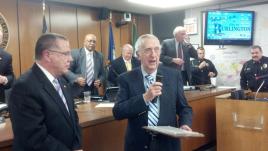 NOTE: Please follow this link to read the comprehensive obituary story about Don in the Times-News.

I walked through the entrance to Alamance Regional Medical Center and headed toward the reception area. I applied hand sanitizer from the nearby dispenser and asked the woman behind the counter which room Don Bolden was in.

“He’s in room 109,” she said without looking it up. Another woman seated in a small waiting area nearby, exclaimed, “Don Bolden? You mean the guy from for the newspaper, the Times-News?”

“Same one,” I answered quietly and thought to myself, “Don hasn’t worked at the newspaper full time in nearly two decades and hasn’t written anything in  a year and a half. That’s how well known he is in this community.”

I marveled at that — the staying power and influence and affection and respect engendered by one man in one city and county. At a time when journalists are under siege, this kind of admiration is a throwback from two or three eras ago. And again I thought to myself, “When Don passes away there will never be another like him.”

The time came at around 2:40 p.m. on Thursday, Aug. 2. Don passed away quietly at the Hospice Home in Burlington after a battle with cancer. It’s a profoundly sad day for those who worked with or knew Don Bolden — nearly everyone in Alamance County. That’s the kind of figure he was in our community.

THAT VISIT to ARMC was on July 15, 2018 — a Sunday afternoon a little more than two weeks ago. I got a call that day from Steve Buckley, publisher of the Times-News while Don was editor and during the first few years of my time in that job. When the caller was identified on my phone as Steve I knew right away it was about Don, who has been in a period of unstable health since being diagnosed with cancer in December of 2017. Steve told me that Don had fallen in his home on Friday and that there was some concern that his cancer was once again growing worse after a short respite that ended his chemo and radiation treatments.

I drove to ARMC immediately because … well, because you never know how much time someone has left at age 85 and in a body slowly caving in to a disease that claims millions annually. I had seen Don only a week to 10 days before at the Times-News office for an event marking the murders of journalists in Maryland. He looked frail and undernourished. Eating had become problematic over the past few weeks because nothing really tasted good to him anymore. He was living on Ensure and little else.

That was one of the reasons for his fall. Don had passed out due to a combination of factors — dehydration being among the largest. His blood pressure was also low.

When I saw Don on July 15 he looked every bit as sick as he must have felt. He was being given transfusions to restore his blood pressure to a safer level. He was being fed fluids, food and potassium tablets to get other levels closer to normal. But he was alert and talkative. We conversed for about 90 minutes. He told me one astonishing fact. This was his first overnight stay in a hospital. I’ve had at least three and I’m just 58 years old.

He also told me something else. The MRI he received didn’t portend good news. It found fresh spots in his neck and brain area. By all appearances, his cancer was getting stronger as he was getting weaker.

ON MONDAY July 16 the doctors gave him the sad news, his cancer had indeed returned and was growing. No more treatments were ordered. It began as lung cancer months ago but had moved as cancer has a habit of doing. When it returned there were lesions on his brain. Don was going into palliative care. He was taken to the Village at Brookwood.

I visited Don a few times over the past few weeks. He faced his final days with a realistic outlook, resolve and stoicism. He was always the Don Bolden I had known since he and Bill Hunter hired me as a sports writer at the Times-News in 1984. Four years later he moved me into a newsroom management position as weekend editor. When I became city editor and assistant managing editor he endorsed both moves. When I returned to Burlington in 2007 in his former job as executive editor, he was among the first to welcome me back to the community I had left 15 years before. By this time he was retired and had been named the first and only Times-News editor emeritus. There will never be another one of those either.

I passed along messages to Don from those he hired and managed as they found out about his deteriorating condition. I also had the opportunity to thank Don for all he has done for me over the years. He seemed surprised to hear from so many people from the distant past, including Jo Craven McGinty, a Wall Street Journal columnist and member of two Pulitzer Prize winning reporting teams in her career. Her first newspaper job was at the Times-News shortly after she graduated from then Elon College. She was among my colleagues in the 1980s.

Jo wrote the a few things, some that will appear in other stories about Don in the Times-News. This one resonated for me.

I’ve always been grateful for my years at the Times-News. That feeling has only grown as I’ve traveled from place to place. I’ve been fortunate to have worked for some wonderful news organizations, but I’ve also spent time in newsrooms that were indifferent at best and backstabbing at worst. If I had started out in one of those places, I might not have stuck with journalism. But I knew there was another way, and Don gets a lot of credit for that.

A few years ago, I returned to Elon to be recognized as a distinguished alum. It was an emotional event for me. My mother had died a few months before, and Don presented me with the award. I was overcome by all the memories of my different families — my mother, my college and Don, who hired me the week I graduated. When I accepted the award, I couldn’t do much more than say thank you because I thought if I tried to say any more, I’d cry. But it was because those memories mean so much to me, and having Don there reminded that where you start out in life, and in career, has an enormous influence on where you end up.

I told Don when I gave him Jo’s message that he had a quiet but significant impact on the young reporters who worked in his newsroom. “Hell, you looked after me when I was too young and stupid to look after myself,” I told him.

That line got the best laugh I saw out of Don since sometime back in 2017.

ON ONE OF MY last visits to Don as he rested in palliative care at the Village at Brookwood, I stopped by the entrance to sign in as a guest. I told the man, a guy who appeared to be in his 50s like me, that I was there to visit Don Bolden.

“The Don Bolden who wrote for the Times-News all those years?” he asked. “He’s here?”

I confirmed it and the man went on to nicely talk about how his family read the newspaper. He read Don’s column and his father did too. He also professed admiration for now retired columnist Frances Woody and one-time city editor Brent Lancaster, who left the newspaper business in around 2013 or 2014 to work at N.C. State University.

“Did you work at the newspaper?” he asked.

“What did you do there?” he asked.

Not nearly what Don did, I said to myself and walked toward the elevator.

There will never be another one like him. Rest in peace Don Bolden. You left a mark on your hometown that won’t soon be forgotten.