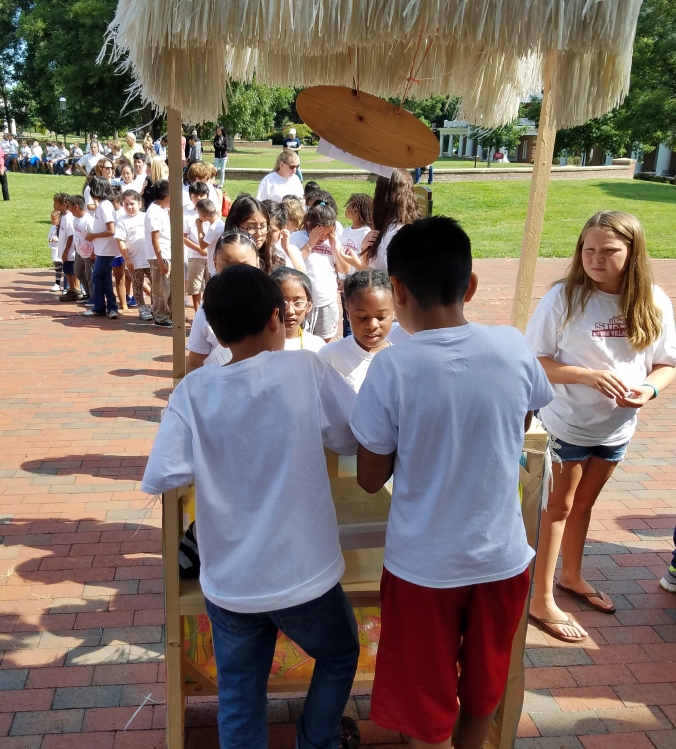 The line for lemonade or limeade posed a daunting challenge early on. Please see a gallery of photos at the bottom of this post.

But nothing could prepare the rising fifth-graders from schools in Alamance County for what would happen when they put all they had learned over the previous eight days into practice on Thursday. That’s when they learned perhaps the most important lesson of all — expect the unexpected.

The 14 future fifth-graders are part of this year’s edition of Summer in the Village, a two-week summer camp that is associated with Elon University’s ongoing community outreach program, “It Takes a Village Project.” It’s an effort initiated a few years ago by Elon’s Center for Access and Success to help tutor children in Alamance County who are struggling to read. Today it tackles multiple aspects of learning, including math. The Village Project operates daily during the school year from a building in downtown Burlington. Jean Rattigan-Rohr heads the Village Project. Elon students help as do teachers in the Alamance-Burlington School System.

For two weeks in July Summer in the Village is conducted in the Elon Academic Village. Most of the classes are headquartered in Lindner Hall. This year the number of students — around 170 — reached a point where other buildings in the Academic Village were pressed into use. It’s a good problem for Rattigan-Rohr to have.

The kids are dropped off by their parents, a family member or friend at 9 a.m. and each camp day ends at noon. The classes are split by grade. K-8 all have their own classes. One class is for high school students.

I was a volunteer for Summer in the Village last year in a class for rising eighth-graders. Marie Alston who is an administrator of pre-K programs for the Alamance-Burlington School System, led our class and I worked with students on writing. I was  unable to volunteer this year but will aid the program in another way — helping it find much-needed funding.

This year the fifth-grade class is taking center stage and its studies provide a wonderful example of why the program fills a significant need. While this particular class worked on a variety of subjects, the primary focus was on economics, business and finances. Many of the students come from lower income homes with no college graduates. Many are part of families who come to the U.S. from other countries. The learning curve is steep. Some of the economy lessons the fifth-graders are learning would also be helpful for adults.

Last week Jean told me about the fifth-grade class, which is being led by this year by my old friend and village teaching partner Marie Alston. She is joined for 2018 by Brandon Sheridan, an associate professor of economics at Elon. Together they’re telling the kids a lot of things they don’t know about an important subject: Money. “They’re really into it,” Jean told me. She invited me to come back the following week to visit the lemonade stand the class was setting up as a business venture with proceeds going to the homeless shelter operated by Allied Churches of Alamance County. The idea came from a book the students read during class, “Danny Dollar: Millionaire Extraordinaire (Lemonade Escapade).

I decided to visit the class a day before the lemonade stand to learn more. I walked into a fun and informative rundown of things Marie and Brandon wanted the students to remember from their studies before opening the lemonade stand the following day. Marie goes through the costs to operate the stand — lemons, limes, sugar, water, cups. Then she asks, “What jobs will be created?” They run through a list that includes, someone providing the recipe, the persons who produce the lemonade and limeade, the cashiers who take money, the wait staff who take the order. Advertising and promotion are discussed as is setting up and cleaning up.

As they talk about jobs, the division of labor is addressed. One girl raises her hand and volunteers to provide the lemonade recipe. “I make lemonade for my dad on weekends,” she says. Other students also agree to take on specific assignments.

Negotiation becomes necessary when a dispute arises over what price to charge customers. The teachers want to charge less, the students more. They agree to have an “Early Bird Special.” From 10:15 a.m. to 10:30 the cost per cup will be lower.

It would be nice if this were so easy in real life.

At the end of the review, Marie broke out an oversized blank check that will be made payable to Allied Churches after the revenues from the lemonade stand are determined. The campus print shop thoughtfully provided the check at no cost.

Thursday turned out to be a perfect summer day to operate a lemonade stand. Hot, it’s summer after all, but not too humid. All of the participants for Summer in the Village were invited. It was also open and promoted to the campus community. Elon faculty and administration are key supporters for Summer in the Village. I volunteered last year. Sheridan did this year as did Bob Shea, the associate vice presidents for business, finance and technology. He helped teach math to sixth-graders, a significant area where Alamance-Burlington School System students need help.

This is where the fifth-graders learned about expecting the unexpected. As the oft-quoted saying goes, the best laid plans sometimes go awry.

As the 10:15 a.m. start time approached, all appeared ready. A long table was set up with containers ready to be filled with lemonade and limeade. A small Tiki hut was placed beside the tables. Orders and money would be taken there with customers going to the longer table to pick up their cool drinks. And the ad man was visibly touting the event. In fact, Yeisin Aguilar from Newlin Elementary School was in nearly every photo.

As the first wave of customers began to line up — and I’m talking about dozens of kids enjoying their regularly scheduled break — a problem arose with Elon’s biodegradable cups — they were placed on the table around 9 a.m. and melted in the mid-morning sun. Someone quickly found paper or plastic cups to use until more Elon cups could be delivered.

The line got longer with each passing minute. And even though the customers were very well behaved and not demanding in the least, the cashiers found the experience a little overwhelming. “It was very good but very stressful. It’s a lot of people,” Joshua Garcia, a student at Elon Elementary School, notes.

I have no doubt.

When the line finally ran out — and I note that customers included university deans and vice presidents — the students had not only survived but succeeded brilliantly. A couple of glitches aside — and there are always a few glitches — the operation ran smoothly. They faced all challenges, adapted when necessary and overcame adversity. Pretty much a routine day in any small business.

In all, the lemonade stand raised $375.60. A healthy sum by lemonade stand standards. Owen Covington from University Communications also tells me an Elon staff member who “loves the village” is matching that amount. So the oversized check will be for $751.20.

Factoring in the invaluable life lessons the class received over the past two weeks, that’s a lot of reward from a summer camp. Hopefully the parents won’t be too overwhelmed when their kids present their personal business plans on Friday. I hear a few will want to negotiate for higher pay to do chores around the house.

Here are a few extra photos I put into a gallery. 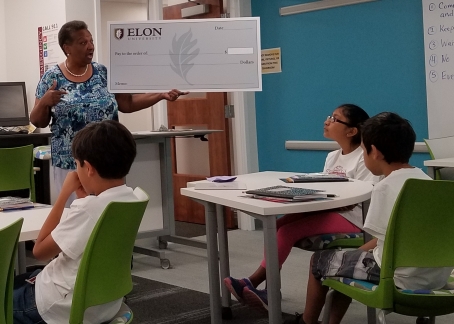 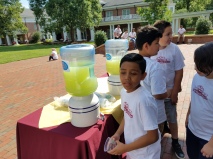 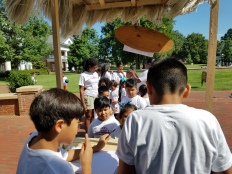 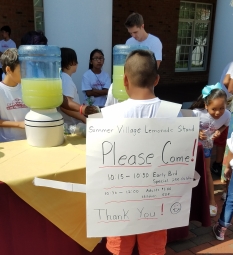