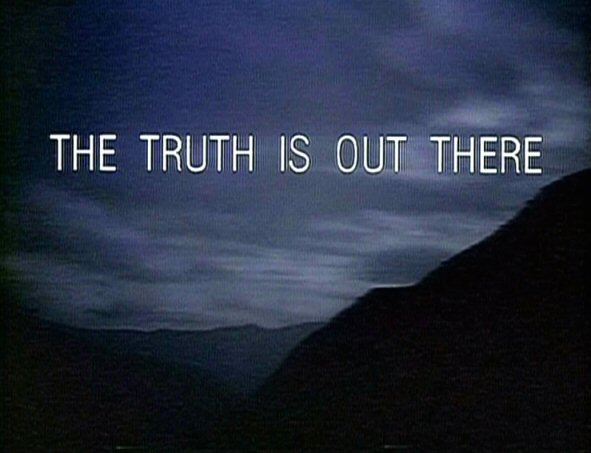 “The Truth is Out There” and “Trust No One”  are two phrases that for years were most closely associated with the murky conspiracy-rich TV series, “The X-Files.”

Today both define life in the United States of America.

How we got to this point in our history was not a random evolution of human nature and culture. It was one developed by first unscripted trial and error followed later by intentionally conceived misdirection and political demagoguery. TV and movie scripts followed suit — because that’s what happens. Art and entertainment always reflect what’s going on around us. Mix it all together and we go from the clean-cut and wholesome crimefighting agent Lewis Erskine portrayed by Efrem Zimblast Jr. in the 1965-74 TV show “The FBI” to the porn-watching truth-seeking, conspiracy-mongering and corrupt-government chasing agent Fox Mulder played from 1993 until today by David Duchovny on “The X-Files.”

Is it any wonder no one has faith in the FBI anymore? Current events clearly indicate that to be the case.

Yes, politicians and other hucksters are at the root of this overall decline in trust by Americans. The endless demonizing of all political opponents for short-term gain didn’t really plant the seed — because doubt always existed in human nature. But it more than supplied all the fertilizer required to make it grow like kudzu. And of course most know what makes the best natural fertilizer — politicians excel at supplying it by the ton.

The media aided and abetted this with no small amount of gusto. Conflict is an easy story to tell and sell. It was the natural inclination of the media and isn’t something new to modern America. You think the press is negative today,  go back and look at print publications from decades, even centuries ago. It makes today’s reporting look like Sesame Street. The difference over the past 30 years is that it became easier to spread these messages by first TV and now the internet.

This has been a slow erosion to where we find ourselves — caught in a trap of our own creation, pointing fingers in all directions with no clear idea of what our foundational institutions mean anymore. Religion is caught in this trap, too. We moved from Norman Vincent Peale to TV con artists begging for money in the name of faith.

All of these issues and a few others have placed American confidence at record low levels for organized religion and journalism. Approval ratings for Congress is in the single digits. According to Gallup polling, people don’t trust banks, corporations, government, media or churches.

This matter of trust — rather a lack of it — is one of the things that got our interest last summer when we addressed topics for the Community Connections forums in 2017-18 at Elon University. Community Connections is a yearly series of discussions about the defining local and national issues of the time. The events are held at Elon — my current employer — in partnership with my old newspaper, the Burlington Times-News. We assemble a panel of experts or those involved in a particular field. A moderator asks questions with the goal of also getting questions from the audience, too. We are in our fifth year. Full disclosure, I’m one of the organizers.

And on Feb. 21 at 7 p.m. in the McKinnon Room in the Moseley Building at Elon our topic will be the erosion of trust and possible ways to rebuild our faith in government, education, corporations, the media and other foundational entities. It’s important because this lack of faith breeds contempt, skepticism, apathy and an alarming disinterest in civic participation, not to mention voting.

Our panelists for the forum include: Tanya Rivera, a reporter for WFMY News 2 in Greensboro; Freebird McKinney, the current Alamance-Burlington School System Teacher of the year; Allen Johnson, editorial page editor for the  News & Record of Greensboro; and Zach Ambrose, principal at Ambrose Strategy and one-time chief of staff for former Governor Beverly Perdue. Carrie Eaves, a political science professor at Elon will be the moderator.

The goal of Community Connections forums is to create thoughtful dialogue with members of the university community as well as those who in live in Alamance County and the surrounding area. Past forums have explored issues surrounding on domestic violence, hunger, downtown revitalization, health care, gun violence and welfare. The public is invited and there is not admission charge. It’s free, y’all.

This one is a pretty important topic that could lead to some great interaction between our audience and the panel. Maybe even some ideas for how to make the long journey toward respect.

I trust a whole lot of people will be there.