We found the TV show almost by accident. Someone with the same last name as my spouse was informed that “Papandrea” appeared as the last name of a byline for a Burlington Times-News story from around 2008 or 2009. He tracked down her work email via online search and sent her a message. He wanted to know if they might be related. He said his brother-in-law saw her name when the newspaper story’s image appeared on a program aired on Investigation Discovery this week.  It was a brand new show, available for viewing for the first time on Dec. 26, 2017.

It was about the murder of Sara Dixon on Nov. 30, 2007 in Alamance County. It was at one time an unsolved and puzzling case that stumped the Alamance County Sheriff’s Office for a couple of years until some things fell into place. The newspaper story got some of the credit by Sheriff Terry Johnson. We had never heard that before.

The program description reads this way.

Everyone in town adores Sara Dixon and police are baffled when they discover her shot dead in her sleep. Their only clue: Christmas tinsel that the killer tracked in. But rumors of a secret family feud will soon reveal a story of monstrous betrayal.

The program was produced for Investigation Discovery, a network of crime-related mini-documentaries I had never watched before. We had no idea that the show existed or that a local case was being featured. The show can be streamed on the network’s website or via an app. It’s one of their shows called Grave Secrets. This one is subtitled “The Manner of Murder.” You can find it for streaming online here. It’s also available for streaming via YouTube.

In many ways the show is predictable for anyone familiar with the Sara Dixon murder. As it turned out, her stepson hired someone to kill her in a dispute over his father’s estate and money being spent to care for his father who was an invalid following a stroke. Dennis Dixon, found guilty of murder in 2013 in Alamance County Superior Court. Thomas Clay Friday pleaded guilty to murder and testified against Dixon. 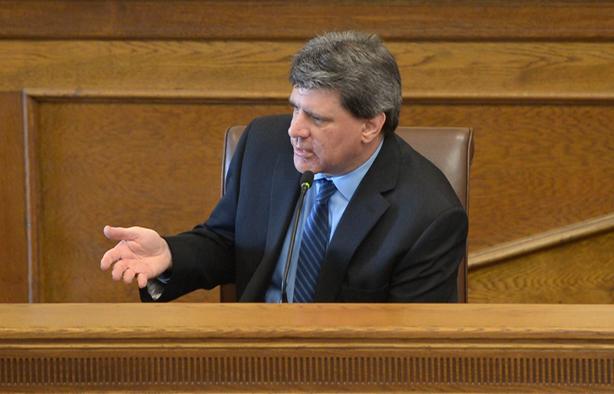 Dennis Dixon testifies in Alamance County Superior Court. Thanks to the Times-News for this photo.

There are the usual re-enactments of events common to these kinds of shows. There is recent stock footage of the court square in Graham and the “In God We Trust” sign at the sheriff’s office — things that weren’t like that back in 2007 when the murder occurred. There is some footage purported to be Burlington. But the show also contains details previously unknown or not widely reported, exceptional interviews with the sheriff, lead investigator Curtis Morris and Brenda Clapp, a close friend of Sara Dixon. And something I hadn’t seen before, actual video footage of Alamance County investigators interrogating Thomas Friday. It’s almost like a moment from one of my favorite TV dramas of all time, “Homicide: Life on the Street.” In that show the fictional Baltimore murder detectives have a variety of methods for breaking down suspects in “the box.” It was intriguing to see Johnson work in that environment and also hear his views on how to get a confession from guilty suspects.

The real moments with Johnson and Morris are very well done. Morris provides background and details about the case. Johnson enjoys conversation and this comes through. The sheriff admits that he “loves to talk to suspects” and offers examples of how he pushes his chair close to someone being interrogated and tells them he’s trying to help them unburden their guilty consciences. It’s intriguing and compelling. At one point Johnson tells the interviewer:

“I love people who don’t want to talk. … They all have a little man or woman inside them that wants to let it out. Press the right button and you’ll get it.”

The Times-News story shown during the show has this headline: “2007 murder gets fresh look.” It was one of the stories my wife Roselee Papandrea wrote about the Dixon case as the investigation proceeded without notable success. At one point the sheriff admitted there were really no leads to speak of and hope of solving the case appeared dim. Reporters often update the status of prominent murder cases by asking every few months if anything is new. That’s what happened in this case. Roselee’s story apparently got the attention of someone who had just moved back to the Burlington area a few years after the murder. He read Roselee’s story and contacted the sheriff’s office. He told them a tale about a gun and a man named Thomas Friday. That information became the foundation for solving the murder of Sara Dixon.

That was good to hear, finally. It was surprising.

That story by Roselee, by the way, led to a search warrant that led to the informant’s name being published in the newspaper. He later made threatening phone calls to Roselee and our editors. He later stopped by the office and said he would kill me if we published his name during court testimony — we had to call Burlington police to force him to leave our property.

We published it anyway.