People usually edit their memories in one way or another. Some even manage to forget specific events completely.

Facebook doesn’t have a selective memory function. What someone produced on their Facebook page on a random day in say, 2011, will turn up on that same day in 2017 in a daily feature the social media site compiles. Facebook memories provide a daily dose of laughter, nostalgia, sadness and in more than few cases, winces.

Which brings us to June 3, 2011. It was National Doughnut Day that year. It was also the day a guy threatened me at the newspaper office. Count those kinds of incidents among the 50 or so reasons I left the business without much remorse in November after 34 years. People ask me if I miss it. The answer so far is always “no.” Being yelled at or threatened by irate people isn’t something to be mourned when it stops happening. It’s a cause for celebration.

I remember the incident of June 3, 2011 itself pretty clearly but rarely if ever think of it. Most confrontations are by phone and quickly forgotten. I used to get those pretty regularly — sometimes three or four times a week. That’s why complaining and whining  politicians never make much of an impression. They’re annoying but not dangerous. Seriously deranged people occasionally call newspaper offices, every so often they’re criminals with long histories of violent acts. Listening to elected officials piss and moan doesn’t add up to much in comparison.

I usually try to avoid getting angry with callers on the phone — no matter who they might be. I always wanted to be courteous for as long as possible. It wasn’t always doable. Sometimes I might be busy when the call came in, stressed by a deadline or just in a bad mood. Two things callers tended to say could set me off, though. One just flat ticked me off. The second might provoke hysterical laughter.

No. 1: “I’ve contacted an attorney about suing your ass.”

This just made me angry. Often I responded this way, “Well, we have attorneys, too sir (or ma’am).”

For the record, not one ever filed a lawsuit.

Since celebrities seldom place telephone calls to small newspapers in North Carolina, you have to possess a substantial ego to believe that your name carries enough weight to sell even one additional newspaper beyond members of your own family. Usually I had to stifle a laugh when someone said this over the phone.

Face to face, though, it’s impossible to hide the smile. 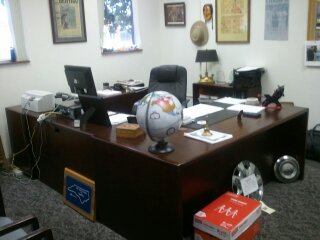 My office in the fall of 2011. I took the photo because I had just cleaned it — something that happened about once a year.

The person who dropped by the office to meet with me on June 3, 2011 wasn’t a violent criminal, at least not yet — but he certainly ran in groups that either included them or were close enough to know of them. He was a witness in a murder case that involved a stepson who hired others to kill his stepmother. This guy knew the players and came forward very late in the game to police with the information they needed to make an arrest.

So let’s just say he wasn’t your basic civic-minded citizen.

He was well into a boiling point when he arrived at the office and demanded to speak to the editor. We had published a story that morning about the murder case and his name figured in the story. He was listed in search warrants and other documents. He was also on the pretrial witness list (and did ultimately testify). He had called our reporter the night before after the story was posted online demanding his name be removed. We did not. He felt being named put him in danger, even though all the suspects were in jail awaiting trial.

My first mistake was inviting him back to my office rather than speaking to him in the newspaper lobby. I never made that error again. I asked then-city editor Brent Lancaster to join us for the discussion. I let the guy vent for a while and explained our position. This didn’t cool him off even a little bit. He demanded that we never use his name in another story, including his testimony during the trial.

I told him we couldn’t make that promise. If his testimony was important to writing about the trial it would certainly be published. That’s when he said, “You’re just trying to sell papers.”

That’s when he exploded, calling me a “motherf**cker” and a “son of a bitch.” At this point I told him he needed to leave and escorted him to the front door — a long walk in which he berated and threatened me the entire way.

After he left the building, he remained across the street ranting and raving. Ultimately someone called the police who finally talked him into leaving. Thankfully, I never heard from the guy again.

And we did use his name in our coverage of the murder trial.

So June 3, 2011 was another fun morning in the newspaper business and a reminder of why I’m glad to be doing something completely different these days.

3 thoughts on “You don’t say; or how I nearly got myself killed one morning”