Several years ago, just about a year before we got married, Roselee created a really cool gift for me. It was a bound booklet of nearly two years worth of my columns published in the Jacksonville Daily News when I was managing editor there. It took a lot of work to put it together. She had to find and clip the columns, then copy each one and have the whole thing bound together.

Roselee Papandrea Taylor was and still is the remarkable person.

Then what did I do? Proceeded to misplace it in one of our moves from one house to another. I looked high and low for it at our house in Burlington. But as I discovered while working at home over the past few weeks, I wasn’t looking for the right thing. The last time I remembered seeing the book it was in the box in which I received it. So I was searching for that box. But just this week I was cleaning the shelves in my office at home while waiting for return phone calls or email, and there the booklet was, wedged in-between my old high school and college yearbooks.

So every so often I’ll post a column from that period on this site. I was a different kind  of writer then. Less serious than now with attempts at humor that alternated between lame and completely useless. Sometimes there was a combination of the serious with comedy but nobody was confusing me with Dave Barry.

The dumb luck of finding this very old collection of columns is that it includes one from 1994 coinciding with something current. My friend and former newspaper colleague Jay Ashley messaged me the other day. He let me know a TV show about the case of convicted arsenic-poisoner Blanche Moore for which he was interviewed was going to be aired on Sunday May 17, 2020 at 6 p.m. and 9 p.m. on the Oxygen network. He later posted a link on Facebook with promotional trailers about the show, part of a series called “Snapped.”

I was city editor of the Burlington Times-News in1989 when the Blanche Moore story started. It was the most bizarre, toughest and most competitive newspaper situation I encountered in 34 years of journalism. I’ll write more about that another time. But I did want to share this from so many years ago about the first days we heard about the story in our newsroom and my longtime friend the late Jim Wicker very apt prediction. 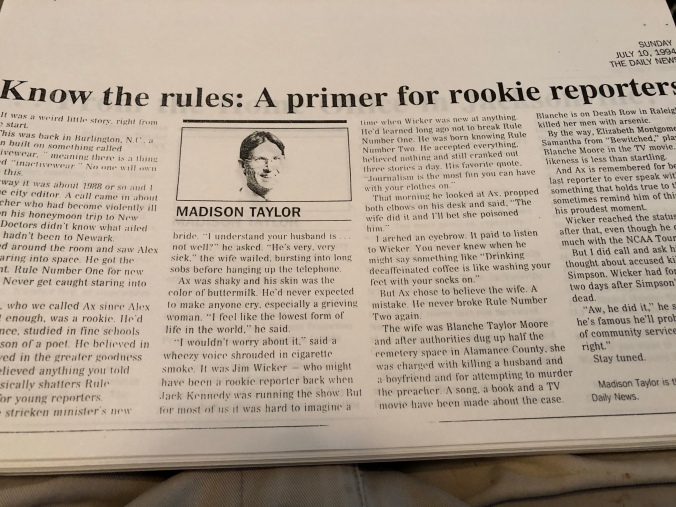 It was a weird story right from the start.

This was back in Burlington, N.C., a town built on something called “activewear,” meaning that there is potentially something known as ‘inactivewear.” No one will own up to this.

Anyway, it was about 1988 or so and I was the city editor. A call came in about a preacher who had become violently ill while on his honeymoon trip to New Jersey. Doctors didn’t know what ailed him. He hadn’t been in Newark.

And Alex, who we called “Ax,” because Alex wasn’t short enough, was a rookie. He’d lived in France, studied in fine schools and was the son of a poet. He believed in art. he believed in the greater goodness of man. And at the time he believed most anything you told him, which basically shattered Rule No. 2 for young reporters.

So Alex called the stricken minister’s new wife. “I understand your husband is … not well,” he stammered. “He’s very, very sick,” the wife wailed, bursting into long sobs before hanging up the phone.

Alex was shaky and his skin was the color of buttermilk. He never expected to make anyone cry, especially a grieving woman. “I feel like the lowest form of life in the world,” he said.

“I wouldn’t worry about it,” said a wheezy voice shrouded in cigarette smoke. It was Jim Wicker, who might have been a rookie reporter back when Richard Nixon was still in charge. For most of us it was hard to imagine a time when Wicker was new at anything. he’d learned long ago not to break Rule No. 1. He was born knowing Rule No. 2. He accepted everything, believed nothing and still cranked out four stories a day. His favorite quote, “Journalism is the most fun you can have with your clothes on.”

That morning he looked at Alex, propped both elbows on his desk and said, “The wife did it and I bet she poisoned him.”

I arched an eyebrow. It paid to listen to Jim Wicker. You never knew when he might say something like “Drinking decaffeinated coffee is like washing your feet with your socks on.”

Alex wasn’t so sure. But a few months later he learned not to break Rule No. 2 again.

The wife was Blanche Taylor Moore. And after authorities dug up half the cemetery space in Alamance County, she was charged with killing a husband, a boyfriend and for attempting to murder the preacher.. A song, books and a TV movie have been made about the case. Blanche is on Death Row in Raleigh. She killed her men with arsenic.

By the way, Elizabeth Montgomery, Samantha from the TV comedy “Bewitched,” played Blanche Moore in the TV movie. The likeness is less than startling.

For a long time Alex was remembered for being the last reporter to actually speak with Blanche Moore. I used to remind him of this. It is not his proudest moment.

Wicker reached the status of oracle after that, even though he couldn’t help much with the NCAA Tournament pool.

But I did call the other night and asked what he thought about accused killer O.J. Simpson. Of course Wicker had already formed an opinion two days after Simpson’s wife was found dead.

“Aw, he did it,” Wicker said. “But since he’s famous he’ll probably get 37 hours of community service. That sounds about right.”

One thought on “A prediction that was eerily accurate”