The front page of today’s Wall Street Journal (March 11, 2020) features a story about a rebound in the stock market (good news), two stories involving the COVID-19 outbreak (it is what it is), another item about a plan by Vladimir Putin to remain president of Russia (shocking!), and something about the removal of U.S. troops from Iran (probably about time). All are worthy news items.

But the story that got my attention was along the bottom of page A1 where the Wall Street Journal usually places a quirky bit of modern social or work culture. The headline was: “Sure, Leave Your Mug in the Office Sink. No one Minds.” (sarcasm!)  What follows is the most office thing ever that was not highlighted at some point during the TV comedy “The Office.” It was about the dirty dish pileup in kitchen sinks at work.

And in my experience, it’s a thing.

The WSJ has a pretty stringent paywall on its website, but here’s a link to the story anyway. It will likely resonate with anyone who has worked in an office over the last three decades. I have toiled in offices since the 1980s and at each and every location where a common kitchen is in use by the staff, the sinks are lousy with varying degrees of coffee mugs, Tupperware, dishes, bowls, plates and flatware — lots and lots of knives, forks and spoons. At my current workplace on a college campus, it’s the occasional mug or glass — sometimes a knife. Not too bad overall. We have a sign above the sink directing people to clean up and take their items elsewhere. Most follow directions, but it took some convincing. 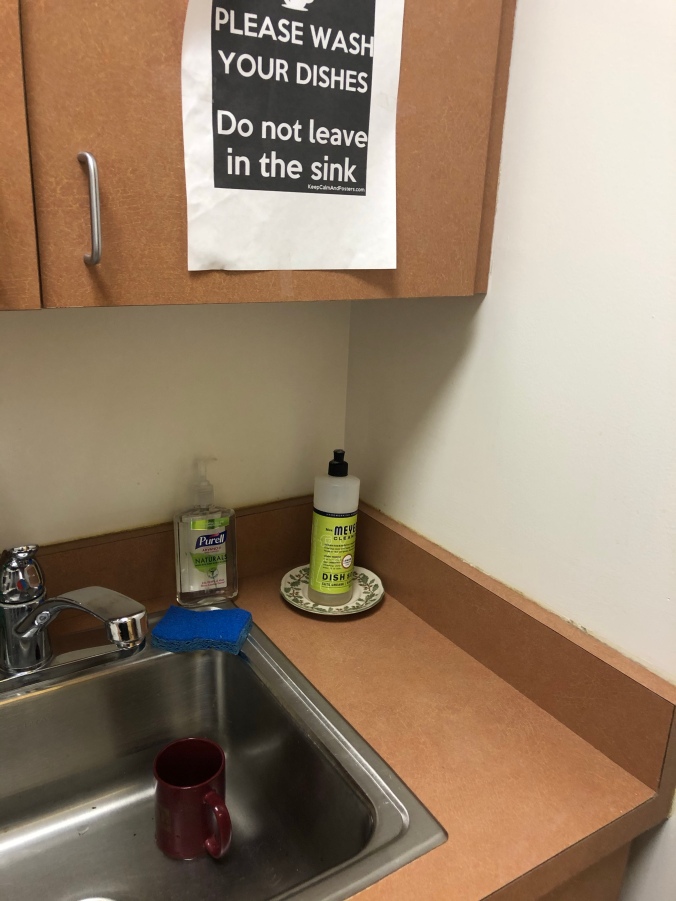 But when I worked in some newspaper offices, the sink was a biohazard waiting to explode — a buffet for roaches, a Mecca for mice, and catnip for fruit flies. I’m a pretty messy guy and I found some of those sinks disgusting.

So when the WSJ story included phrases like: “When people don’t wash their mugs it can prompt ‘Shakespearean levels of drama’ in the company’s Slack channels,” I completely understood. The next paragraph begins . . . “Memo to office workers everywhere: Your colleagues are outraged by your unwashed coffee mug and used salad fork and not-so-silently scheming over what to do about it.”

Usually co-workers aren’t all that silent about it. Sometimes at least one takes the lead in meeting the problem head-on to cleanse the sink of  dishes containing particles of stray food and other detritus. In some of those workplaces that person is my wife.  Potential health-code violating filth in the office kitchen sink is perhaps her biggest pet peeve. Once at the Burlington Times-News when the sink came to resemble a germ warfare testing site for the Pentagon, she enlisted her own army to address the situation. Their mission? After a short warning and then a regular deadline, they simply throw stranded dishes, mugs, forks and knives into the trash. After losing some mugs and a piece or two of Tupperware, folks began to fall in line.

The WSJ story gives some examples of open germ warfare in offices around the nation. Photo shaming cropped up in some workplaces. In others as dishes pile up. so do often creative signs. One example had this message: “Every time you leave a dirty dish in the sink, GOD KILLS A KITTEN!”

Luckily, at my office today things are under much better control. We almost never see dishes or mugs in the sink for weeks at a time. The kitchen remains relatively clean, there are no fruit flies in sight and we are relatively drama-free.

2 thoughts on “Dishing it out at the office”