The first surprise upon starting a tour of the Inn at Elon the day before it officially opened was this tidbit from our guide: “When guests arrive they will be offered their choice of a glass of water or a glass of champagne,” she said.

Nice touch. Either choice is a win. And there were plenty more nice touches where that came from. The Inn at Elon, a project discussed for years before planning and fund-raising began during my first few months on the job as a writer in University Advancement, was going to be special. I knew that already. Just like any building or program at Elon, the inn was going to be immaculately designed with dozens of unique features. It’s billed as a four-star hotel and conference facility and it’s every bit of it.

I wasn’t disappointed and neither was anyone in our group during our visit on Friday, Jan. 10. The word “spectacular” jumped to mind. Other words I heard that afternoon: “Beautiful,” “incredible,” “fancy” and “wow.”

About 50 members of University Advancement took the tour as part of our annual mid-year staff retreat (in-house it’s called an “advance” because in our department we never retreat, we always advance). Our day of meeting and discussion at Impact Alamance in downtown Burlington ended back on campus with a visit to the Inn at Elon. For nearly all of us it was our first look inside the place. Few others on campus had it either.

We split into groups for the tours — champagne not included since we were not room guests. Our group was led by an Elon student who was well-versed on the hotel’s features. We had the chance to view almost any area inside. Outside sod was slowly replacing the mounds of wet red clay and some outdoor features had yet to be installed. The pergola is one example.

Because the opening was less than 24 hours away, work crews and hotel staffers were everywhere placing this, moving that, scraping one thing, and washing the other. The lobby gift shop had a few Elon items for sale but the snacks and sundries were missing. The large coolers for drinks and wine were empty. When filled, though, it’s supposed to be open 24/7.

Across the way stood the restaurant —  The Mark at Elon — and lounge. Both were nearing full readiness. 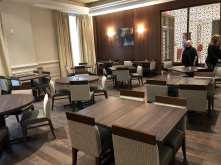 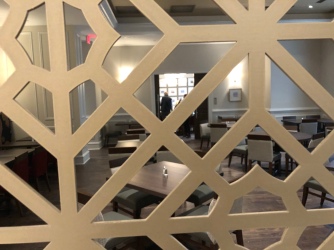 While no wonderful smells were coming from the kitchen as yet, some menus were on top of a table in the private dining area. I took some quick photos of the brunch, lunch and dinner small plates menus in case anyone wants to take a look. Click the photo to enlarge it. I think reservations for this place will be a must. The Mark has room for 72 customers while the lounge can accommodate 41. 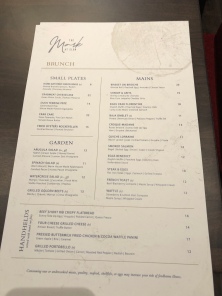 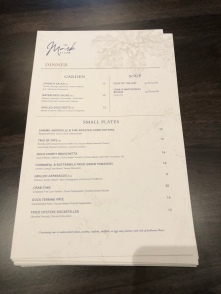 Our guide took us through the lobby, which displayed comfortable-looking seating areas with furnishings decorated in Elon University’s colors. 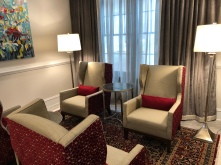 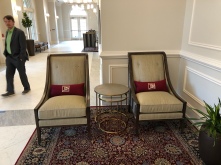 The ballroom is immense and can be divided for smaller gatherings. But I believe it will be a popular spot for weddings and other special engagements. According to the inn’s staff, managed by Charlestowne Hotels, some weddings are already booked. 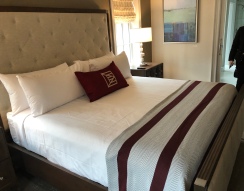 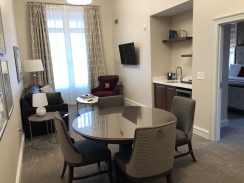 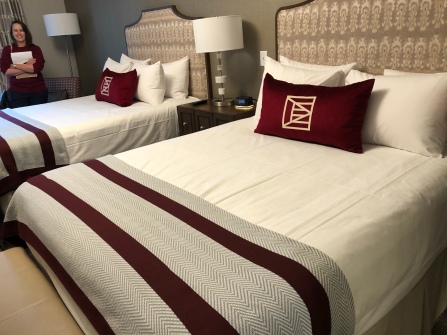 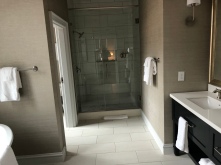 Without question the Inn at Elon is not only a major addition and attraction on the university campus and Town of Elon but a significant destination in Alamance County. It’s a full-service hotel for anyone staying in the area, not just on campus. It’s also available to rent for conferences, receptions and parties. It’s easily accessible to I-40/85, downtown Burlington, West Burlington and Gibsonville.

The most significant feature, though, has little to do with what the inn looks like or the incredible service it will no doubt provide its guests. No, what sets this $31 million facility apart is what it will mean for students in the future. The inn’s motto is “A stay with purpose.” That has special meaning. The inn itself is owned by the Elon University Endowment. University endowments represent money or financial assets that are invested to grow the principal and provide more funding for university needs. The Inn at Elon is one of those investments by the Elon Endowment. The endowment owns the inn and revenue generated by the inn’s guests will go toward creating scholarships and financial aid for students. It’s a unique financing structure that made the project possible — along with the generosity of Elon’s loyal donors.

The Inn at Elon is located beside the Koury Business Center on North O’Kelly Avenue near Phoenix Drive. Guests can walk nearly anywhere on campus from there, but it’s really close to the north campus athletics facilities, the Inman Admissions Welcome Center and Martin Alumni Center.

For more details about the Inn at Elon check this story on Today at Elon.