UPDATE: On Tuesday, Oct. 29 the NCAA made a move toward allowing athletes to sell their brand while still on campus and playing for athletic teams — something it seeks to put in place in 2021. This belated action is in response to the California measure passed a  couple of weeks ago and similar actions announced by other states, including North Carolina, to put athletes on equal ground with other students when it comes to making a buck off their talents. It’s overdue by the NCAA but will also require some oversight as a case like the one I mentioned below illustrates.

The very first thing I thought of when news broke about the California State Legislature voting to turn collegiate athletics and its governing body, the NCAA on its ear wasn’t the immediate impact of allowing college athletes to sell their brand for personal gain, or whether it would be the demise of amateur athletics (it’s not), or even if this could ultimately lead to colleges and universities to paying its student-athletes beyond their athletic scholarships — sort of like employees.

No. The first thing I thought of was Dwight Jones.

Before going further I want to say that I endorse the California measure that would allow college athletes to be hired for endorsements or use of their image. It had wide bipartisan support among California lawmakers, who made the law over the objections of state and private universities. It places athletes on a level field with other students who are free to endorse what they wish in return for compensation. This seems fair in a system today where institutions of higher learning reap huge financial benefits from student-athletes and their images without paying a cent for it. And let’s face it, the NCAA is moving way too slowly on this issue and California turned up the volume.

The catch, of course, is that students in any endeavor have to gain enough fame to be viable endorsers in their market and then across a wider spectrum. In athletics, it’s a handful of people — the stars, the players like Zion Williamson. Students in performing arts might get famous enough to make a buck or two but who really knows. It just seems fair that student-athletes have the opportunity to capitalize on their own image, abilities and voices.

Which brings me back to Dwight Jones. He represents one of the minefields universities will face if the California legislation is widely adopted across the nation — and it will be. Even the NCAA itself knows this can’t be contained. But the case of Dwight Jones, a former standout wide receiver at the University of North Carolina who grew up in Burlington, could be instructive for institutions dealing with individual endorsements. In December 2011, Jones allowed his name and likeness to be used to promote a New Year party at a club in Burlington where free shots each hour would be available courtesy of Dwight Jones and dress was touted to be “sexxxy casual.” Even though the event was also Jones’ birthday, it was, and outside of California, still is an NCAA violation. Jones was ruled ineligible for the Tar Heels Independence Bowl game against Missouri once the ad below was reported. Note he’s wearing a UNC football uniform. 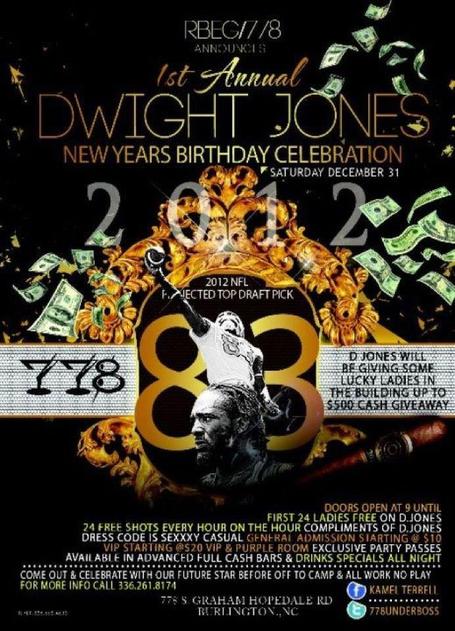 Jones apologized, the offending ad was removed, and he was reinstated to play in the game.

Ultimately, the party went off as scheduled, which made no one happy at UNC or the NCAA. UNC barred Jones from its NFL Pro Day in March.

Anyway, laws like the one put in place by California would remove any NCAA sanctions for such an endorsement, but that also creates a problem for institutions of higher learning. Most wouldn’t want their players’ images or those of the university itself associated with nightclubs, heavy drinking or “sexxxy casual” whatever that might be. What players choose to endorse, or what businesses and organizations they associate with could provide multiple levels of headaches for university athletic departments and administrators. How about that star quarterback signing autographs at a strip club?

So it will be interesting to see how this all unfolds.

As for Jones, he’s had a series of setbacks, a family tragedy and legal issues and seems to be out of football.

UPDATED: Because the status of the case mentioned in the link was not widely reported, I asked my one-time newspaper colleague and friend Isaac Groves to check it out. he says that Jones plead guilty to charge of animal cruelty and got probation. He has a pending assault on a female charge and has had another conviction for violating DV protective order.