The Rise and Fall of the Branchhead Boys: North Carolina’s Scott Family and the Era of Progressive Politics; By Rob Christensen; University of North Carolina Press; 2019; 322 pages. 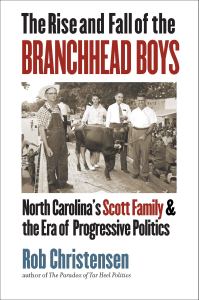 In today’s polarized political environment it is almost impossible to imagine a time when elected leaders worked to solve the day-to-day problems of average people struggling to make ends meet despite long odds and a paucity of basic services such as electrical power, roads, clean water, indoor plumbing or telephones. For decades rural Americans, especially in the South, raised families on small farms under precisely those conditions. Every day was a fight just to break even. Avenues for escape via good schools were rare. Health care options for children and adults were spotty at best.

Those harsh realities began to change, often led by populist politicians who were themselves born and raised in rural Southern communities. Among the most prominent from that era was North Carolina’s governor Kerr Scott, a Franklin Roosevelt supporting New-Dealer whose vision, country-bred political acumen and understanding of the dire needs in farm communities fueled a family political dynasty that endured for nearly 50 years. The rise of the Scott family from the Alamance County farm community of Hawfields to powerful positions in Raleigh and Washington — and their subsequent decline and calamitous fall — is the subject of an insightful, well-researched and valuable new book by longtime political reporter and newspaper columnist Rob Christensen. Three generations of Scott family members won local or statewide elections from 1948 to 2000 serving in the legislature, the governor’s mansion, the Council of State and U.S. Senate. In doing so, the Scotts influenced generations of progressive Tar Heel Democrats before a shift in North Carolina’s popular and political cultures slowly eroded the family’s base of power. Ultimately scandal ended this remarkable run of political success.

In many ways the decline of the Scotts as state political power brokers mirrors the reversal of electoral fortune for Democrats throughout the South, brought on by the same culture wars that divide the nation today. Christensen, a political reporter for the Raleigh News & Observer for 45 years, was a witness to this unfolding drama from the sidelines. Few reporters in North Carolina are better positioned to write this chapter of state political history than Christensen who has interviewed and chronicled famous North Carolina politicians such as Bob Scott, Terry Sanford, Jesse Helms and Jim Hunt but also knows well their operatives and would-be kingmakers. Christensen uses his own background and sources, augmented by voluminous documents and historical accounts to weave an instructive and rich narrative that connects without fanfare or hyperbole the rural liberalism immediately after World War II to the rural conservatism that dominates North Carolina politics today. In fact, the backbone of Kerr Scott’s populist support is interchangeable with the populist support that later swept Republican Jesse Helms to the U.S. Senate and now is the foundation of President Donald Trump’s substantial popularity in North Carolina.

Kerr Scott’s rise to power from his farm near Haw River was crafted through connections he created as a state leader in agriculture. He developed a network of rural backers he called “The Branchhead Boys.” The name derived from those who lived and worked at the head of a river branch or tributary. Unlike other politicians, Scott didn’t work the courthouses when he arrived in a community, he visited “the head of a branch and then worked my way down.” He built a loyal following across the state, but especially in poor Eastern North Carolina communities, by vowing to bring electricity to their homes, pave roads to better haul crops to market and improve schools and health care. He then delivered on those promises, often with eye-opening tax increases that seem almost impossible to accomplish today. In Christensen’s estimation Kerr Scott was among the most liberal governors in state history.

As times changed, the dynamic shifted. Racial unrest, forced integration of schools and civil rights for African-Americans created a wedge that divided the state and South politically. White rural voters drawn to progressive policies that improved their way of life, balked at support for integrated schools and neighborhoods. This racial dividing line would ultimately be the beginning of the end of longtime dominance by Democrats and give Republicans such as Helms the tools needed to rearrange the political landscape for decades.

Before his untimely death while serving in the U.S. Senate, Kerr Scott waffled on racial issues in an attempt to mollify two key bases of support — African-Americans and the Branchhead Boys. When Kerr Scott’s son Bob Scott entered state politics, ultimately running for governor and winning in 1968, it was not without a cost. Like his father, he also tried to serve two voting blocs but made neither happy. And while Bob Scott’s stance on racial matters stands in better historical contrast to other Southern governors of this period, it’s still not a record to look back on with much pride. As is the case with many in public life, he was overtaken by inevitable changes he was too slow to fully embrace or understand.

Bob Scott’s time in office is also marked by the turbulence that also gripped the nation in the late 1960s. Campus unrest boiled over with a series of protests that sometimes included violence. Incidents occurred at the University of North Carolina, North Carolina A&T State University and Duke with Scott calling in the state Highway Patrol and National Guard to restore order.

Because of racial unrest, the Vietnam war, campus protests, violence and political turmoil, Bob Scott’s term as governor was perhaps the most politically challenging of the 20th century. Bob Scott kept a diary that offers unique and clear insight into his thought processes while reaching one difficult decision after another. Christensen uses these diary entries to illuminate the governor’s sometimes conflicted thoughts as history-making events unfold. While Bob Scott was widely praised in some circles, he was criticized in others, often within his own party or occasionally family. Uncle Ralph Scott, a longtime and highly respected state lawmaker, sometimes served as a guide along these most troublesome waters. Eventually Bob Scott’s term as governor likely damaged any long-term political aspirations and an attempted comeback a decade later failed miserably.

Christensen does an outstanding job of patching together what had to be hundreds of documents, letters and interviews to deliver a concisely written and thought-provoking historical account that is both rich in detail yet not overwhelming. He presents the story of the Scott political dynasty without editorial comment. In the best reporting tradition he places facts above commentary, providing just enough context to sharpen the clarity of sometimes murky events.

The Kerr Scott legacy ended — at least for now — with the short tenure of granddaughter (and Bob Scott’s daughter) Meg Scott Phipps as State Commissioner of Agriculture. She won the statewide office in 2000 but resigned in 2003 amid a campaign finance scandal that involved bids for the state fair. She pleaded guilty in 2004 to federal charges that included fraud and conspiracy, serving three years in prison before her release in 2007. Ironically the incidents for which she was charged were considered common practices during campaigns managed for her father and grandfather.

Perhaps that is the final lesson that can be taken from “The Rise and Fall of the Branchhead Boys.” A family political machine built upon the idea of change eventually fell because it could not recognize the need to change.

2 thoughts on “Review: ‘The Rise and Fall of the Branchhead Boys’ the story of an N.C. political dynasty”