One of the things I miss about working in downtown Burlington is actually being a part of the fabric of what’s there. When I worked at the newspaper office on South Main Street I would take daily walks stretching from City Park to the depot. Starting when I returned to Burlington from 15 years on the coast in 2007 I roamed the streets looking at the architecture, the empty storefronts, the sites rejuvenated by LabCorp and the promising locations where brave souls started new businesses into what was then an abyss.

In 2007 there wasn’t much to see. When I took walks after 5 p.m. or on a weekend afternoon, nary a car could be found — unless it was parked at Zack’s Hot Dogs, Burlington’s most iconic and long-established eatery. People love that place. As the calendar turned, though, things began to change in downtown. New businesses opened and held their ground. A couple of bars sprang up. A coffee shop, maker hub, and Smitty’s Ice Cream gained purchase on Front Street. A cool vintage music instrument store is on Main. It was cool to watch these things unfold over the course of my afternoon walks and as the years passed. And I often returned to the Times-News with story assignments based on things I saw. Sadly, that sometimes included the departure of some businesses. The rejuvenation of Burlington’s downtown comes with fits and starts. As great as gaining Company Shops Co-Op was, losing it was equally painful.

Over the past couple of months I have reacquainted myself with Burlington’s downtown by way of more community involvement on my part. In October I was invited to join the Burlington Downtown Corporation’s board of directors. I gladly accepted and am still learning the ins and outs of this opportunity to help impact the growth of Burlington’s downtown. Recent developments include Impact Alamance renovating the old Cammack Building into a space for several non-profits — including the BDC, the coming expansion of the Paramount Theater into the former florist shop next door, and the opening next month of Burlington Beer Works — the long-awaited restaurant and microbrewery on Front Street. I hope to write more about the latter this coming week.

Also within the past couple of months, I joined the Friends of the Alamance Libraries board. While that’s not strictly a downtown enterprise, the main county library branch, May Memorial, is a centerpiece of downtown Burlington. It’s one of the entities besides Zack’s that draws people there.

I spent an hour Saturday morning in the basement of May Memorial Library with fellow Friends of the Alamance Libraries board member Barbara Roberts. She invited me there for an orientation of how to help our organization’s largest events events of the year — the spring and fall used book sales. The fund-raiser has raised more than $1 million for the library since its inception. Thousands upon thousands of books, CDs and DVDs have been sold from the May Memorial basement. And thousands of book are there now ready to be purchased at bargain prices. More come in every day through donations by people in our community eager to help the library and also clear their shelves at home. The spring sale for 2019 starts on March 15 and book donations are sought now — in fact I took a bag downtown this morning.

The sheer number of books on the shelves is daunting. I told Barbara that my wife, Roselee, is always overwhelmed by it all — including the large number of people scrutinizing the stacks. Saturday morning I learned the procedures for library volunteers when it comes to sorting, assigning categories and shelving books in alphabetical order. Volunteers are encouraged to drop by if they have a free hour and simply pick up where someone else left off. I’ll be doing my part. 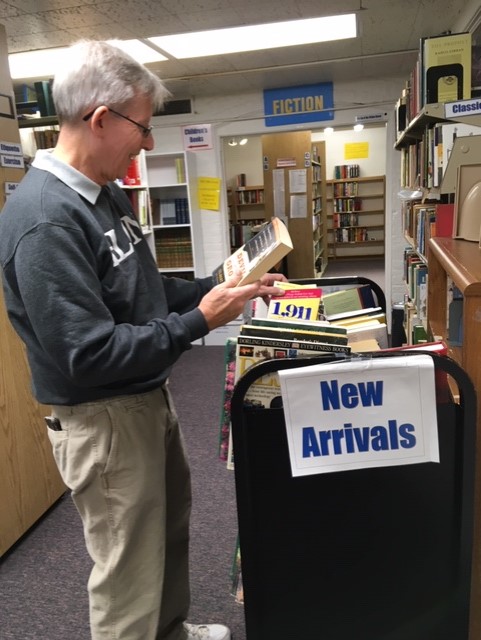 Thanks to Barbara Roberts for supplying this photo of me pretending to sort through books donated to the library used book sale.

After the tutorial, I took my first extended walk downtown in about two years. It was a sunny and relatively mild day — around 50 with no wind. There were quite a few people milling about. A lot of cars occupied parking spaces. In 2007 I could walk downtown amid no cars and acres of parking on a Saturday morning. I popped into Zack’s for a quick bite and the place was slammed with people — folks were lined up waiting for a table or an open seat at the counter. I went to the takeout area and Zack got me a couple of dogs in about 30 seconds. I took the bag outside and sat on a bench across the street and enjoyed my renewal of this Burlington tradition. I then stopped by an antiques store on Worth Street, looked into a few other places to see what might be going on and took a long look at Burlington Beer Works. The area in front of it was blocked off — there’s still some sidewalk and other areas under construction. But I know the brewery and restaurant are hiring staff. I saw a photo on social media of the interior work still being finalized. The bar itself looks fantastic. Organizers say March is the planned opening. The date has not been announced.

But I think it will be a popular destination. Maybe not quite like Zack’s, but I expect a crowd in March.