New Orleans Saints football coach Sean Payton declared on Sunday that his team will never get over what happened in the Superdome earlier that day when a missed call by  game officials opened the door for the opposing Los Angeles Rams just enough to force overtime and ultimately defeat the Saints in the NFC championship game. Had the call  — and take your pick because there were three gigantic infractions (pass interference, head to head contact and face guarding) on the play — been made, there was a 98 percent chance the Saints would win the game and advance to the Super Bowl against the New England Patriots. It was the worst officiating blunder I can ever recall in a championship level football game. It was an error the NFL admitted following the game — and the NFL almost never owns up to a mistake.

In some circles Payton’s remark, made just a few minutes after the painful and emotional finish in overtime, was met with skepticism. Some thought he was a bit extreme. Never, after all, is a lonnnnggg time. But I knew then and know now that he’s right. Even professionals can’t let certain things go. And there are few chances in sports to play for a title on any level. Some players never do. Getting there is a tough haul. And for an aging team like the Saints — gritty and undersized quarterback Drew Brees is 40 — the window is closing on such opportunities. The players on the field for the Saints will never get over it.

And neither will Saints fans. I know this from personal experience.

First, I’m not a Saints fan and had no strong interest in what team won the game on Sunday. But I can certainly empathize with Saints fans because I’ve been there myself. I’m almost 60 years old and to this day have never recovered from the ACC Tournament of 1975 and the World Series of 1985. In both instances bad calls from a referee or umpire had direct impact on the outcome. Also in both instances — as was the case for the Saints on Sunday — the eventual losing teams still had chances to avoid the dire outcomes but failed to do so. That said, had the right calls been made to start with, the games would have been over with the correct team on the winning end.

The closest parallel I can recall to what occurred on Sunday is the World Series of 1985. My favorite team, the St. Louis Cardinals, were up in the series three games to two over the Kansas City Royals. The Cards led in the ninth inning of game six and were one out away from winning the World Series when this happened.

Sigh. I still find this difficult to watch. St. Louis closer Todd Worrell clearly caught the ball at first base ahead of the runner but the umpire inexplicably ruled the runner safe. 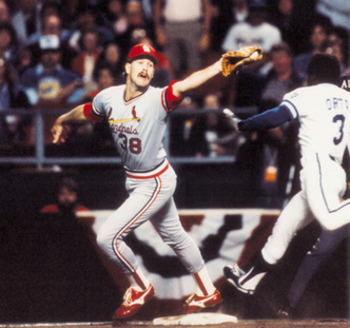 Instead of out three and a joyous celebration, the Cardinals went into a downward spiral, lost game six through one miscue after another and then were routed in game seven. But the game truly should have been over. The umpire that day, Don Denkinger would be largely defined by this moment. And sadly took probably far too much abuse for it from St. Louis fans. I say sadly because game officials on all levels aren’t perfect and don’t deserve all the abuse they invariably take. But I do expect them to be competent and subject to the same review process players or coaches face. After all, mistakes cost people their jobs. And I realized that despite the mistake, the team still had chances to win — but that doesn’t mean I can forget it. I mean, it cost my team the World Series. Damn.

The event in 1975 was not on so nearly a large or significant stage. I grew up and for many years was a fan of sports at tiny Wake Forest University — where my dad went to college. It was the closest university to my home and we could easily attend games. The mid-1970s was a fallow time for Wake Forest basketball, always second fiddle to the University of North Carolina and N.C.State. Duke was also not a force during this time.  And 1975 was another year of mediocrity.

At that year’s ACC Tournament Wake, seeded No. 7, was playing its most bitter rival, UNC, in the first round. That’s when what longtime Deacons fans call the “Scoreboard Play” occurred. My longtime friend Gary McCann lays it out well  in this retrospective written for the Greensboro News & Record on the 20-year anniversary of that game. Deacons fans were incensed then and probably still are. I know I am.

You can follow the link to read Gary’s full story — and he does a great job telling it —  but I’ll put a few graphs here.

It was the first game of the 1975 Atlantic Coast Conference Tournament in Greensboro. Wake Forest, the No. 7 seed, led the second-seeded Tar Heels by 10 with five minutes to play. It was 90-82 with 50 seconds left. With 34 seconds to go and Jerry Schellenberg set to throw an inbounds pass, Wake was up 90-86.

Carolina was in full-court pressure. Schellenberg uncorked a length-of-the-court pass to Skip Brown. The pass cut a long arc through the coliseum air. Brown caught the ball in stride and was headed for the hoop when he was fouled by Dave Hanners. Brown, an excellent free-throw shooter, was going to the line to ice the game.

But referee Fred Hikel had tooted the play dead. The pass, he said, hit the overhanging scoreboard. Carolina’s ball out of bounds.

The rest is history – bitter history for the Deacons.

Carolina tied the game at the end of regulation on a shot by Brad Hoffman, went on to win 101-100 in overtime, escaped a second overtime game in the semifinals against Clemson and ultimately won the ACC title, beating N.C. State and ending the college career of the incomparable David Thompson.

“They were pressing and we were prepared for it,’ Brown says. “We set up a play and it worked like a charm. I was wide-open, Jerry threw the pass and I got fouled. I was going to the line when someone said it hit the scoreboard. It must have been a minute later.

“There’s no way it hit the scoreboard. I wouldn’t have been able to catch it.’

If that scoreboard hadn’t gotten in the way, the course of ACC history could have been changed.

Indeed, UNC went on to win the ACC Tournament that year and made the NCAA Tournament at a time when only the conference tournament winner got invited to NCAAs. Wake was only a couple of years away from becoming a successful basketball program, a stretch that would include an Elite Eight appearance in the NCAA Tournament.

But I still argue to this day that the ball didn’t hit that damn scoreboard and I always will. That was nearly 44 years ago.

And I bet Saints fans will be talking about pass interference for just as long.