UPDATED TO ADD LINK to interview with new James Madison coach Curt Cignetti by Adam Smith of the Burlington Times-News and the breaking news Sunday night that Elon is going to announce its new coach on Monday. Monday I added the news that defensive coordinator Tony Trisciani is the new head football coach at Elon. The press conference is set for 1 p.m. Monday, December 17 at Alumni Field House.

Almost one year ago exactly I sat across from then-Elon University head football coach Curt Cignetti. It was a December morning and we were at his office in Alumni Field House next to Rhodes Stadium. It was the first and the only occasion when we spoke face to face.

Once the early signing day for football recruits passed he responded to my request for an interview. I was working on a story for the Magazine of Elon about the eye-opening season Cignetti’s first Elon team had just completed. It made history, which is why I was there. Cignetti, who accepted the job in January of 2017, took over a team coming off a 2-9 campaign that included seven straight losses, many of them lopsided. Elon football had not recorded a winning season in six years. My assignment was to find out how the new coach turned that team into a juggernaut that won eight straight games, earned a top 10 national ranking among FCS schools, challenged No. 1 ranked James Madison for the CAA conference title and made the FCS playoffs. (You can read that story here.)

But before I got into all of that on what was a sunny but brisk December morning in 2017, I had something else I wanted to ask first. “Coach, this is what everyone in my office wants to know so forgive me for being sort of off the subject, but are you staying?” If he was taken aback by the question he didn’t show it much. He answered neither too quickly nor too slowly. Coaches who are successful can expect to be asked this kind of question, especially by supporters of the teams they lead. I don’t think I recorded what he said that day but it was along the lines of, “we like it here. I have no immediate plans to leave.” That’s not exactly it, but it’s similar to something from the playbook of coaching under “What to say when asked about your job status by an impertinent writer.”

I enjoyed talking to Cignetti that day. He was open and direct. He dodged no questions and gave me above and beyond what other coaches might. Unknown to me, he had allowed about 45 minutes for the interview but as it stretched toward an hour, he quickly made a phone call to tell his next appointment he would be a little late. He said we could speak as long as I wished but I didn’t want to waste his time and wrapped things up in about 10 more minutes. I found him to be engaging but intense. He struck me as being focused, task-oriented and willing to work. He has a vision for what he wants his players to accomplish and is gifted at selling them on it. He had big plans.

“Here’s a guy,” I thought to myself, “who can maybe build something at Elon in terms of football success — if he stays long enough.”

That “if” is a boulder, though. It’s a gigantic boulder. It’s a roadblock that trips up smaller colleges and universities where coaches go to prove themselves so they can move up to somewhere with more money, larger enrollments, greater alumni bases, more facilities, thousands of fans and stronger recruiting. Good coaches are in demand. Potentially great coaches are prized and come at a premium. They’re like unicorns.

Think about it. Nationally there are far more unsuccessful coaches than great ones. The great ones are almost impossible to find — it takes some luck. College basketball provides a nearby example. Duke University stumbled into basketball coach Mike Kzyzewski more than 30 years ago. He was a little-known coach with no huge track record of success. He’s gone on to become the winningest men’s basketball coach in NCAA history. He will be a legend at Duke for as long as that university exists with dozens of things named in his honor. In the meantime, Wake Forest has had seven basketball coaches during that same period, inconsistent results and now has had two winning records since the 2009-2010 season.

Elon football’s recent history is similar. In the 1970s and early 1980s, it had a nationally prominent small college program, winning back to back NAIA national titles in 1980 and 1981. But in the late 1980s, there were fewer successful falls for Elon football. The school became a coaching turnstile. Those who had success like Pete Lembo, left after a handful of years to coach somewhere bigger, in his case Ball State at the FBS level. Much more common were the losing seasons with coaches quickly dismissed and players left to wonder who the next coach might be.

I thought about all of those things on Friday night (December 14) when I first learned that Cignetti would be leaving Elon after just two years. I was headed to the annual Elon faculty and staff Christmas party when I saw the news via Twitter. Curt Cignetti was going to take the head coaching job at James Madison University, a rival in the same conference with Elon — a team Elon defeated in October ending a 20-game CAA winning streak for the mighty Dukes, who were ranked No. 2 in the nation, played for the national title the previous year and won it the year before that. James Madison has a tremendous history of football success.

I knew that JMU was interested in hiring Cignetti — supporters had expressed it via social media. I also noted earlier this year that people with ties to JMU were visible at the Elon spring scrimmage. For the first time James Madison was interested in what Elon football was up to. In the fall of 2018, Elon got off to a strong start, including the win over James Madison on the road. But critical injuries to quarterback Davis Cheek and running back Malcolm Summers derailed what began as a promising season. After starting 4-1, Elon stumbled over the last six games, finishing 6-5, capped by a first round playoff loss to Wofford.

As the 2018 season ended, the coaching carousel began. The Dukes  lost their successful head coach Mike Houston to East Carolina so they were looking for a replacement who could carry on a winning tradition. They turned to Cignetti and as it turned out, he was interested and accepted the job at a salary of $425,000 a year.

Upon hearing the news I admit to being stunned and disappointed. Sure JMU has an undergraduate enrollment of more than 20,000 compared to 6,800 for Elon. It has far more resources and a longstanding commitment to football with a larger alumni and fan base. A new coach doesn’t have to build a foundation for greatness, it already exists. But I still thought Cignetti would only leave for a job outside the CAA and most likely at the FBS level. It’s not unheard of for head coaches to move to a school within a conference but it’s unusual. According to my friend Adam Smith, a sports writer for the Burlington Times-News, two years ago it happened in the CAA when Danny Rocco left the University of Richmond for the University of Delaware. If it’s ever occurred in the ACC it  was before my time. (NOTE I was later reminded that it has happened, twice. When Bobby Ross left Maryland for Georgia Tech and when Tom O’Brien left for N.C. State.) The best comparison I can make regarding the ACC would be that it’s like the Wake Forest head football coach being hired at Clemson.

I had also wondered during my research about Cignetti if he might be just the kind of coach who would stay at Elon longer term. It’s an opportunity for the right coach to come in and carve out a legend, which is what Cignetti’s father did at Indiana University of  Pennsylvania. Prior to his arrival at Elon, though, Cignetti had his first college head coaching job at IUP, where he guided the Division II team to three playoff appearances in five years. He arrived at IUP from Alabama where he was an assistant coach on Nick Saban’s staff.

I hadn’t seen any in-depth interviews with Cignetti when I first posted this Sunday afternoon. Subsequent to that the coach spoke with the Times-News. You can see that story here. I am happy to note that what he told the newspaper reflects much of what I wrote a few hours before. He wanted to move to someplace larger, with a rabid fan base and deep resources — things JMU offers immediately. On the FCS level he equated it to Alabama. It wouldn’t be a huge shock if JMU at some point makes the leap to the FBS level. At age 57 it would also not be a surprise to see Cignetti stay at JMU for a couple of years, get the Dukes another FCS title then field offers from a Power 5 university.

Until then, Elon will have the awkward chore of playing the Dukes regularly with Cignetti on the opposing sideline. This fall they come to Elon Sept. 28. I know players, faculty and staff at Elon are already looking ahead to that date. This may raise the temperature of a budding rivalry on Elon’s end. As for me, I wish Cignetti and the Dukes well. I hope he finds what he’s looking for in his coaching career. I’ll root for his teams, unless they’re playing Elon.

Meanwhile the coaching search at Christmas began again for Elon Athletics Director Dave Blank. As 2016 was coming to a close, Blank called Cignetti during a Christmas party at his then-home in Pennsylvania to gauge his interest in coming to Elon. Just after the start of 2017, Cignetti was at a press conference in Alumni Field House telling the assembled media, players and staff about his blueprint for successful football at Elon. Blank moved swiftly again this time. Sunday night the university announced that a new coach would be revealed Monday morning. My first guess is that it will be one of the current assistants, the offensive or defensive coordinator. That’s exactly what happened. Defensive coordinator Tony Trisciani will be the new head coach. That offers the continuity the program needs to succeed long term and helps solidify recruiting this year’s class.

Trisciani will be the fourth coach in seven years. It will be interesting to see what the next blueprint looks like and if it can provide a solid foundation for the long term.

NOTE: You can find all the stories I’ve written about Elon athletics here. 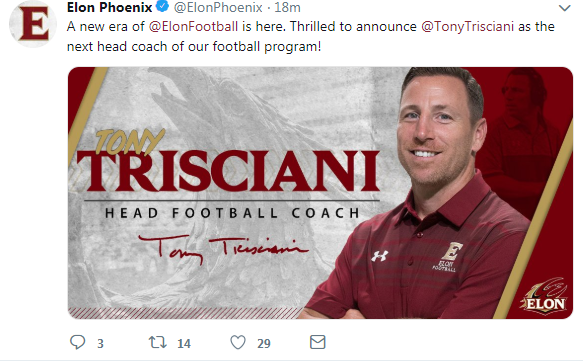