High school football in North Carolina starts tonight — that’s Friday Aug. 17, 2018 (for historical purposes).  A dozen or so teams in the area in and around Alamance County will take the field. Some will do so against traditional rivals. Williams travels across Burlington to face Cummings in a game that once ended the season for both teams on an emotional high note that almost overwhelmed the pending playoffs. I miss those days.

But at two nearby high schools, the Friday night lights will be dark — for now anyway. Chapel Hill High School announced this week it will not have a varsity team this year. Cedar Ridge, also in Orange County, made the same announcement earlier. And in the Times-News high school football special section, sports editor Bob Sutton had a story about how the smaller rosters at 2A schools like Cummings and Graham are putting those teams at a competitive disadvantage against county non-conference teams and perhaps in jeopardy down the road. But it’s too early to know for sure. Cummings had between 25 and 30 turnout for varsity. A few will leave or be lost to injury. The future is uncertain at best.

That would be both a shame but also predictable. I admit to loving high school football for several decades. The truth is, I enjoyed writing about it as a reporter much more than college football, where the stadiums are larger, the fans more jaded, the players more focused and the pageantry overwhelmed by large video boards, TV timeouts and other distractions. I still like watching college football and particularly enjoyed Elon’s run to the NCAA bowl subdivision playoffs last year. I plan to see a few games in Rhodes Stadium this fall.

On the other hand, pro football is something I pay little or no attention to until after Thanksgiving when teams are driving toward the playoffs. The endless video highlights and mindless commentary on ESPN can more than suffice until the World Series ends and cold weather actually sets in. If pro football went away tomorrow I wouldn’t be too upset.

To be clear, football, professional or otherwise, isn’t going away anytime soon. But it has almost certainly peaked and is now in decline.

Several years ago I began to view pro football as a serious problem. Too many horrifying news stories enveloped players, coaches and owners. The violence on the field seemed to be spilling out into everyday life. Then when NFL greats from my youth began showing up with health problems related to repeated blows to the head or limbs, I started to the see the folly of even playing football at all. Nearly a decade ago I began to compare football to boxing. Boxing was once the pre-imminent sport in the United States. When I was growing up in the 1960s and ’70s it was still hugely popular with title bouts on TV, multi-million dollar gates and charismatic figures like Muhammad Ali, Joe Frazier and later Sugar Ray Leonard or Marvin Hagler in the center of it all. There were strong amateur boxing associations. North Carolina had Golden Gloves programs and boxing was a centerpiece of summer Olympics coverage. Future boxing stars were born at the Olympics.

Boxing began to fall out of favor when Ali became a sadly visible shell of his former boisterous and engaging self due to Parkinson’s disease and the endless blows he suffered to the head during his career. The same happened to Smokin’ Joe Frazier — whose battles with Ali were truly epic (word correctly used here). Once these famous fighters were seen as pitiful figures on TV and millions watched their decline, interest in boxing began to taper off. It is now barely a blip on the radar of American sports, mainly populated by opportunists and con artists who used to only operate in the murky background of boxing that was always there.

For the past few years I have watched the same sad parade happen to NFL standouts. Jim McMahon is a notable one. The former Chicago Bears quarterback and leader of the historic 1985 Super Bowl winning team, was diagnosed with early dementia in his 40s and has reported serious problems in other areas. He is among several former NFL players who have expressed suicidal thoughts and other emotional difficulties. Many — like hall of fame linebacker Junior Seau, went through with suicide. The sad epitaph, he shot himself in the chest so doctors could examine his head for signs of CTE (Chronic traumatic encephalopathy). This is the term doctors use to describe repeated damage from repeated head trauma seen in NFL players.

The list of former players plagued by CTE has grown lengthy. In 2016, the NFL offered a $1 billion settlement to former players and it was estimated at that time that up to 1,900 former players could be eligible for payment. Add “at the moment.” It will grow.

The NFL denied this for years — much like cigarette companies disputed links to cancer despite all evidence to the contrary. More recently, though, the league has not sat idly on the sidelines sipping Gatorade martinis. It has also tried to enact more stringent rules regarding helmet-to-helmet contact on the field. The problem is, the players today move so quickly and are so much larger than players from previous decades that it’s almost impossible to consitently enforce. For example, Jerry Kramer, an offensive guard on the NFL champion Green Bay Packers in 1967 who was just inducted into the pro football hall of fame, was 6 feet, 3 inches tall and weighed 246 pounds. Jahri Evans, a guard on the 2017 Packers is 6 feet, 4 inches tall and weighs 318 pounds. Hall of fame middle linebacker Ray Nitschke was 6 feet, 3 inches tall and 235 pounds in 1967. The 2017 Green Bay linebacker Clay Matthews is 6 feet, 3 inches tall and 255 pounds. Even the quarterbacks are larger. Bart Starr, who led the Packers to multiple titles and two Super Bowl wins in the 1960s, weighed 195. Current Pack QB Aaron Rodgers checks in at 225. The 2017 Packers had 14 players weighing more than 300 pounds. The 1967 Packers had none. The supesizing of offensive linemen is stark. I included a photo below of hall of fame coach Vince Lombardi when he was one of the so-called “Seven Blocks of Granite” at Fordham University. He looks like a running back. 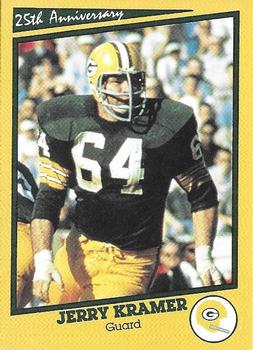 Longtime players contend that football by design is a violent game, hard collisions are why fans watch the game and at this point in their careers, it’s impossible to learn a new way to play. I see their point. Coaches and many others believe the game will become too soft, creating generations of men who are equally soft. UNC football coach Larry Fedora a few weeks ago made the rather bizarre claim that weakening football will also weaken the U.S. military — as if war and warfighting didn’t predate football by centuries.

Others view football as a way to teach life lessons about teamwork, goals, toughness and resilience. I agree with them. Football is the ultimate team game — 11 parts working together on offense and defense. If one piece of the system breaks down, failure for all can follow. Elon football coach Curt Cignetti spent a great deal of time last year teaching resiliency to his players. It made a huge difference not only in how the team performed but how the players viewed their place in the world. So I wonder if it’s time to find something that can replace football in terms of teaching those valuable skills. I say this because I believe we’re watching the first phases of football’s slow decline in importance and participation. While the game is still robust in many communities, it’s tumbling in others. A foundation of future players is being lost.

Participation in youth sports overall is in decline — including soccer, the former darling of parents but a sport that leaves a large trail of injuries itself. As my friend Chris Cary likes to point out, injuries are a risk for kids playing basketball, baseball or riding a skateboard. I hear a lot of parents say they don’t want their kids playing tackle football, something I grew up on. Several million aren’t signing up anymore. I do believe the most serious long-term injury concerns occur after youth sports and the cumulative impact grows with each level of play from high school to college to the NFL. It’s no surprise that players like Tony Romo, Calvin Johnson, Chris Borland and dozens of others have retired from the game years before their careers should be over.

For parents I would also think that other football news is equally troubling. A little more than a week ago a disturbing story emerged from the University of Maryland where a young player — offensive lineman Jordan McNair — died of suspected heatstroke in June after a series of grueling drills. A preliminary investigation by the university reported that basic medical protocols for treating heat sickness were not followed and the strength coach was fired. Football coach DJ Durkin and three of his staff members have been placed on administrative leave pending a more thorough investigation into the suspected “toxic” culture surrounding the team. Allegations have included bullying and abusing players. Few believe Durkin will ever coach at Maryland again — and may never coach anywhere again. If true, he definitely should not.

These kinds of stories remain thankfully rare. The vast majority of coaches I know are excellent men of high character who have moved beyond the brutal practices that defined football for years. But who knows how many other teams operate in similar fashion but have yet to face a tragedy such as this one. My guess quite a few more. Coaches don’t operate in this kind of vacuum. As with any line of work there are great coaches and bad ones. These kinds of stories also further push parents to keep their kids out of football.

If the game is going to survive and move forward it will take better coaching. It will require a return to old-school shoulder tackling. Players from earlier generations were taught to drive with the shoulder and wrap up ballcarriers rather than leading with their heads. Helmet-to-helmet collisions on tackles were rare 50 years ago and commonplace in the 1990s. It will also mean taking some violence out of the game.

Will people turn on to watch a brand of football that is less violent? Will young players who believe they’re invincible want to take part in a diluted game?

Those are good questions.