Do a quick search on Google under the keywords Alamance 12. You’ll find a few stories right away about what has become a notorious and politically charged (what isn’t these days) case involving illegal voting in the county I call home. Most of the stories are from the local newspaper, the Burlington Times-News, where I was once employed. But others come from a variety of places and sources. Some are regional like the Winston-Salem Journal, Greensboro News & Record, Raleigh News & Observer, the Charlotte Observer or Salisbury Post.

But word gets around when things stink no matter where it happens. So a couple of Sundays ago a national story cropped up in the New York Times. It was on page A1 under the headline, “Arrested, jailed and charged with a felony, for voting.” 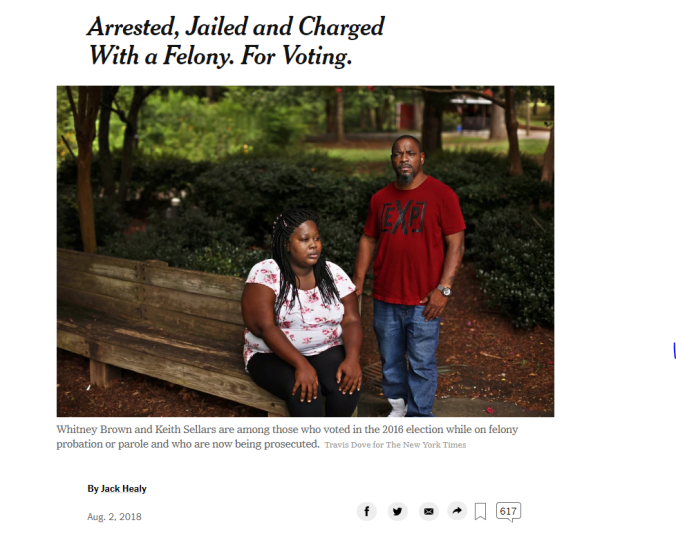 And this week the Washington Post published an editorial putting Alamance County and its outgoing District Attorney Pat Nadolski in the spotlight. The headline? “The assault on minority voting continues in North Carolina.”

Not the kind of positive attention most would welcome. Not the kind of stuff the chamber of commerce puts on its recruiting posters. In short, it’s a community embarrassment.

Here’s the opening of the Post editorial, which puts what’s going on in context.

When election officials in North Carolina audited the 2016 vote, they found 441 ballots had been cast by felons on probation or parole who voted despite a state law barring them from the polls until their sentences are complete. Those votes were illegal, but most state prosecutors sensibly declined to bring charges on the grounds that the offenders didn’t know the law, weren’t alerted to their ineligibility and didn’t realize they had done anything wrong.

Not so in Alamance County, a small locality in the Piedmont where a dozen individuals convicted of felonies, nine of them African Americans, cast votes. There, the Republican district attorney, Pat Nadolski, has gone forward with prosecutions that reflect his own lack of judgment while reminding the nation of North Carolina’s recent poisonous racial history.

Note this is the same Pat Nadolski who has a backlog of 34 people in the county jail awaiting trial for murder with some of the cases dating back four years, according to a story published Sunday in the Times-News. So it’s not like Nadolski, who after losing a re-election Republican primary to Sean Boone in May and is now campaigning to be elected judge, didn’t have bigger and more important things to prosecute. For his part, Nadolski contends that in the illegal voting cases a law was broken and the pursuit of justice should follow. A fair point, but that doesn’t explain why most prosecutors decided not to make federal cases of what might be simple misunderstandings. Indeed, most of the so-called Alamance 12 — hey they have their own Wikipedia page — were never informed by the state their rights to vote had been cancelled, were never informed at the polls that they couldn’t vote and in many cases were not removed from local voter rolls. According to the Times-News, Alamance isn’t the only county going ahead with felony prosecution but it is doing so far more often.

It seems like a waste of time and resources for what should have been no more than a warning at most. After all, state and local elections officials have some responsibility for what transpired to start with.

On Monday five more of the Alamance 12 took misdemeanor pleas, joining four others. Three cases are still to be heard.  According to a story by reporter Isaac Groves of the Times-News one of the Alamance 12, Neko Chantell Rogers, who voted in 2016 while on probation for food stamp fraud, said after the hearing, “I think I’ll stay away from voting and keep my freedom,” then added noting the irony of the statement, “if you can call it that.”

Cynics drowning in a political cesspool of mistrust and partisanship that is driving our nation to the brink of cultural and spiritual collapse, note that this is exactly the kind of response the authors of such laws envisioned years ago when enacted during the era of Jim Crow in the South when voter suppression was geared toward keeping minority voters away from the polls. North Carolina has a sorry history there and has been on a watch list by federal authorities as a result. They point out that it’s no coincidence that nine of the Alamance 12 are minorities.

I can’t pretend to read the minds of others or the intent. But there seems little to gain other than further distrust of the election process by African-American voters when such harsh and unnecessary measures are taken. I would argue that leaders in America should be encouraging as many people to vote as possible, not chasing them away from the polls through fear and intimidation. And a long look should be taken at laws enacted to cancel the voting rights of those convicted of felonies. After their release from prison — if indeed a prison sentence is given at all — the right to vote should be restored. Those subject to laws and taxes enacted by elected officials should have a vote in who is chosen for those offices.

While conspiracy theorists believe there is widespread voter fraud, endless investigations always find otherwise. Many are misunderstandings like the one in Alamance County and are small in number. Some would be easily avoided by more vigilance by state or local elections officials.

Turnout numbers tell a sad story, that more people aren’t exercising an important right. It seems the percentage of voters who cast ballots gets smaller every election. Our society needs to make voting as uncomplicated and open as possible and restore faith in a system in desperate need of morale. Cases like this one don’t help.

Debbie Smith of Burlington contacted me via social media on Monday night. She’s  a volunteer for Down Home NC, a group that has organized protests on behalf of the Alamance 12. She told me what she told the online news organization, The Huffington Post. She registers people to vote around Alamance County and has recently seen more apathy. People are more hesitant to register to vote. The cases brought against the Alamance 12, she said, had increased uncertainty in the community about who could vote and raised concern that someone could get in trouble by going to the polls.

“There’s a lot of misconception about who can vote and who can’t vote,” she said. “A lot of people are thinking they can’t vote that can. It’s really unfair to a lot of people that now think, well, I better not even risk it.”

One thought on “The case of the Alamance 12”