I wrote this at about the time the film “Bull Durham” celebrated its 10th anniversary in 1998. The baseball film comedy just turned 30 in June so it’s time to share it again. A big chunk of the popular movie starring Kevin Costner and Susan Sarandon was filmed at minor league ballparks and other locations in North Carolina — including Burlington Athletic Stadium. One afternoon Susan Sarandon, whose character Annie Savoy taught at “Alamance Junior College,” came to downtown Graham to have publicity stills taken for the film. She could swing a mean bat, or so I heard. 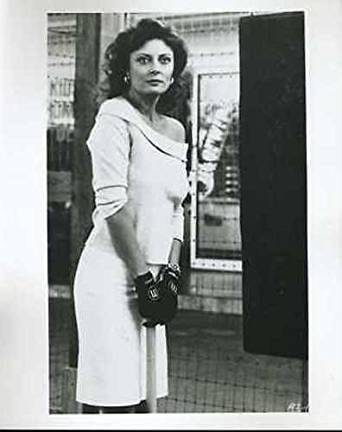 I found only one still from that day online.

Most folks look back with some regret over one thing or another. That’s how life usually works. In this case that’s the story — the regret part I mean.

I’m talking, of course, about the day in 1988 when hot-stuff actress Susan Sarandon up and waltzed into Graham wearing just about the tightest white dress you ever saw and then proceeded to do any number of things with a  baseball bat right there on the main drag. Waited for a crowd to gather, too.

At least that’s what I heard. Photos confirmed it. I wasn’t one of the crowd that late 1980s winter day. That’s where the regret part comes in. I could’ve witnessed it all. I just decided not to. Pure hard-headedness was what it was.

Now, the day hot-stuff actress Susan Sarandon waltzed into Graham wearing just about the tightest white dress you ever saw, she hadn’t managed to get herself real well known yet, but it was coming. She’d done that “Rocky Horror Picture Show” movie where her  character accomplished things for underwear nobody should have a right to do for public viewing. But that movie was pretty far flung from what average folks watched at the local cinema. And she had been in a few other movies, too, including “Atlantic City,” a film that issued a whole new perspective on the routine chore of washing dishes.

But she wasn’t a household name — at least not in your run-of-the-mill neighborhoods. Nobody, for example, wanted to block the entrances into Graham and keep her out of town because they were put out by her views on any subject. It was a more peaceful time was what it was.

For those who don’t know, Graham is a smaller town that is in what is known as the Piedmont region of North Carolina. It’s the county seat of Alamance County and sports a downtown where time appears to stand still. It gives Graham the happy distinction of looking more like fictional Mayberry from “The Andy Griffith Show” than Mayberry ever did.

Over at the newspaper office in Burlington, we knew all about the actual making of “Bull Durham,” though. It was big news for months. A couple of days the filmmakers issued a call for folks to show up over at the baseball park in town to shoot crowd scenes for the movie. It was brutally cold both times, so folks who look hard enough at the film now can detect a few spectators in some scenes snorting smoke like a football crowd at Lambeau Field in Green Bay, Wisconsin. You won’t find me in the crowd. I was too cool back then to participate in such things. Add that to my list of regrets, too.

Filming for the movie was pretty much wrapped up on the day hot-stuff actress Susan Sarandon waltzed into Graham wearing about the tightest white dress you ever saw. She was there to pose for still photos that would be used to promote the film, which would explain the baseball bat. She drew quite a crowd, even on a damp and dreary afternoon. I was not among them, being, again, too cool for such shenanigans. That list of regrets gets longer and longer.

A few hours later one of our photographers brought out a photo he had taken in Graham that day and put it on my desk.

“You missed it dude,” he said.

I looked at the photo and shook my head. It was, I thought to myself, about the tightest dress I had ever seen.