We returned Sunday from an all-too-short long weekend in Beaufort — the one in North Carolina. It was our first visit there in two years. So there were bound to be some changes.

On this trip four things surprised us.

First and foremost the long-awaited four-lane, high-rise bridge connecting the Carteret County mainland to Beaufort was open, leaving the old drawbridge as a forlorn reminder of days — and backed up cars or boats — gone by. It was a smooth and traffic-free ride that will certainly speed travel to eastern Carteret County. The big surprise for us — former nearby residents who haven’t lived there since 2007, was the second bridge that leads travelers into downtown Beaufort. The so-called Turner Street Bridge was also open, which meant we didn’t have to use a GPS to find our way to a place we know relatively well. But it was a bit disorienting the first time over.

Second was this . . . monstrosity — a piece of new construction that really stands out along the historic waterfront, rising on the water across from the N.C. Maritime Museum and right beside the Watercraft Center, where boatbuilding is on display. It looks very out of character for the old fishing and boating town and county seat. On the plus side, Moonrakers — not to be confused with the James Bond movie from the 1980s, “Moonraker,” is a restaurant that advertises rooftop dining. A website says it will be open very soon and the owners are already hiring. And don’t get me wrong, it’s not an unattractive building but it does very little to enhance any view of Taylor’s Creek and the boats that sail casually by.

Hopefully the food is good and the beer locally produced. I know the view will be spectacular for those who venture to the roof. 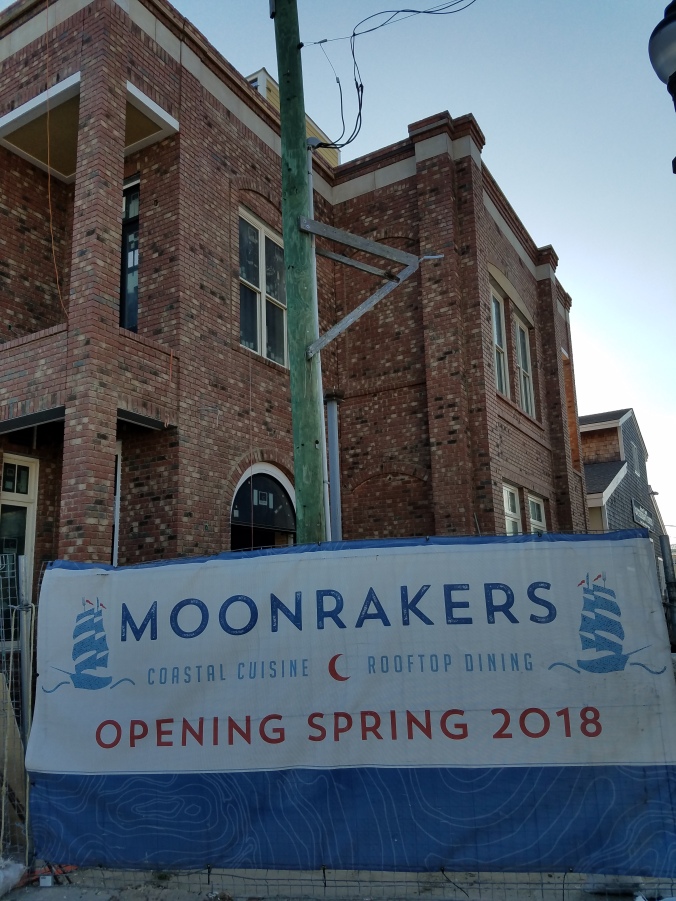 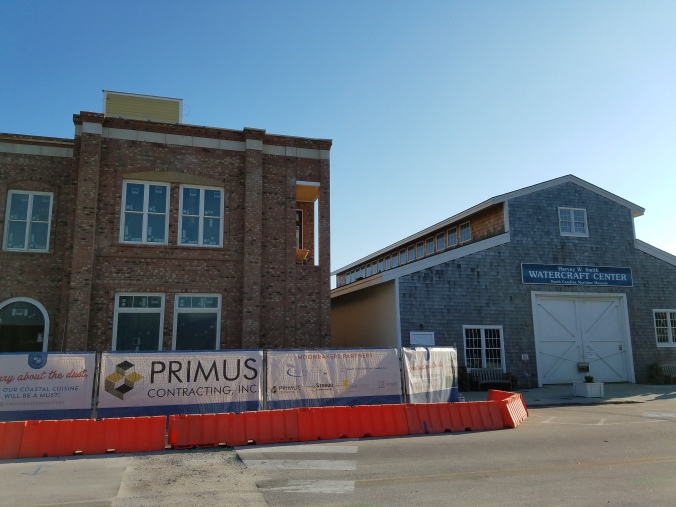 In the sad news department, we walked to the Beaufort Grocery for dinner on Friday night and saw this on the porch of the restaurant located beside it.

The Blue Moon Bistro, our favorite restaurant in Beaufort for several years and among our go-to places anywhere and anytime, is for sale. Roselee, my spouse, had heard the Queen Street restaurant was closed and she called to ask about it. Via recorded message she was told it was simply down for renovations. But this sign indicates something else. The message also advised customers to check out the owner’s other restaurant in Morehead City, the Full Circle Cafe. It looks interesting and we may try it the next time we visit the Crystal Coast. But if this is the end for the Blue Moon Bistro it’s a loss for the restaurant scene in that area. It will be missed.

But when one door closes another opens — that’s what the self-help crowd likes to say anyway. And often it’s true. Because the Blue Moon Bistro was no longer available, we took the suggestions of some friends and visited a little place off a Beaufort side street behind Clawson’s and not far from the Beaufort Historic Site. We called on the fly Saturday afternoon and were lucky to be seated at a bistro table in the bar area.

Let me emphasize, we were lucky. We stumbled into a wonderful restaurant. Great staff, interesting atmosphere, small enough to see into the kitchen from our table, which for us is always a treat, and a small but thoughtfully conceived and expertly executed menu. The chef was originally from Syracuse, which made my spouse, a Syracuse grad, very happy. 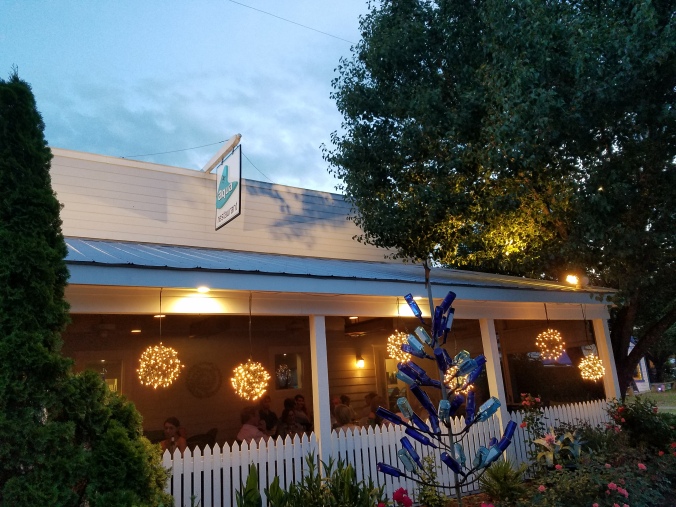 Aqua specializes in tapas, small plates and an exceptional bar. It offered just two large plate options — including a paella. But we found the small plates more than enough. The bartender who served us explained that the small plates come with a four-ounce protein. Sharing is encouraged. So we did.

The watermelon-jalapeno gazpacho was fabulous.

We each got the watermelon-jalapeno gazpacho with lump crabmeat. It was exceptional with just the right amount of heat. The crabmeat portion was generous to say the least. We ordered two small plates. The chef has a fresh catch each day with a different preparation. We had the option of mahi or scallops with a portion of quinoa with artichoke hearts and peppers. We did chose the scallops. We also ordered the seared rare tuna with pickled marinated vegetables and white-balsamic ginger glaze. We shared the plates and it was more than enough. We also split a dessert it was among the best I’ve had, a flourless chocolate torte with chocolate sauce, warm amarena cherries in syrup, sliced almonds and vanilla bean ice cream.

We’ll be back there again on our next trip to Beaufort.

So on our first long weekend away in 2018 we encountered some cool surprises and one big disappointment. I certainly hope the Blue Moon Bistro isn’t gone for good. But that’s also life in the restaurant business — one reason I’m not in it. The weather was perfect, though, and the view from where we stayed at the Beaufort Inn was stellar.