I saw the headline on Twitter this afternoon and had two immediate thoughts. First. “It’s a damn shame.” And second, “I knew it.”

Here’s how the story on the Burlington Times-News website reads so far. It’s a breaking news item and I expect more to be added later. At least I hope so. The first four words speak volumes and echo a story published in the Times-News just the other day stating that the grocery co-operative was looking for new ways to bring some success to the struggling business that was dedicated to healthy food choices and locally produced vegetables and meats.

“While Company Shops Market has spurred many positive things, unfortunately, in the past five years, some things have negatively impacted our store,” the co-op’s board of directors said in a letter to owners. “Though there are many new businesses in Downtown Burlington and plans for more in the future, the number of people working daily there is much lower than it was when we first opened our doors .”

The letter said the board of directors has reached out to community members, former board members and local business owners and “has explored every possible strategy to create a viable business model. Without sufficient funds for day-to-day operations, Company Shops Market will be closing its doors.”

According to the May 20 story written by Bill Cresenzo, “Company Shops Market changes course, struggles to adapt,” the business has been on shaky ground for a while. That’s no surprise for people who frequent downtown. When the market first opened it was a novel concept for Alamance County — fresh and largely locally produced food that focused on healthy options — if you eliminate the beer and wine. The soft-opening in May of 2011 was a major happening for downtown Burlington, offering what was seen as a critical anchor business revitalizing an area that had been down and out for decades. It also offered a healthy lunchtime option where none previously existed. It was exciting. We were at an art show in Mebane that Saturday it opened and drove there to check it out on the first day. And I’m not the kind of person who’s all that curious about new grocers or retailers. Roselee and I were amazed by what we saw. Nothing like it in Burlington or Alamance County at the time. 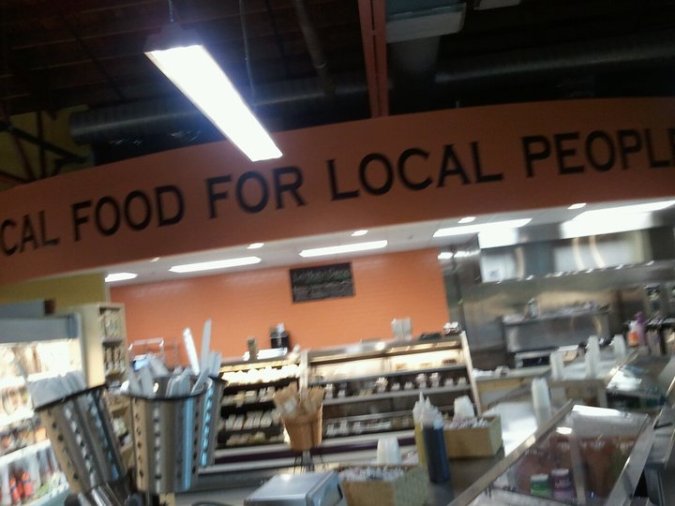 One of the fabulously blurry photos I took on the first day Company Shops Market opened in 2011.

Traffic in the beginning was good to fair. The co-op never had huge crowds. Cost and limited stock of some items made that a given. People curious about the business stopped by, didn’t like the prices and never returned. But it had a steady following. Elon University students discovered it in the fall of 2011 and lunchtime at the co-op became a place to be for a couple of years. The tables were often full as was the counter. People played chess there or had discussions. There was a cool factor. It was a place to be.

Ultimately the novelty wore off a bit. Grocers like Harris-Teeter began to stock the options previously only found at Company Shops and at a lower price. Shoppers migrated there, which made sense. And it certainly didn’t help that LabCorp moved about 1,000 employees out of downtown to a site in McLeansville three years ago. That damaged the lunch crowd at Company Shops.

When I worked downtown I tried to go there for lunch once a week to support it. I often bought beer there because I liked the selection of regional brews. But when that stock declined a couple of years ago and I stopped working downtown, my time at the co-op dwindled. I stopped by there Friday during lunch and no one was there. Apparently the refrigeration unit in the kitchen was out of commission — the final nail waiting to be hammered. Seven years and poof.

One of the last graphs in the May 20 Times-News story states:

The co-op is betting that its focus on locally-sourced products that are “Authentically Alamance” — the county’s slogan for local goods —will keep the co-op on track.

So if the early stories I’ve seen so far are true, then it’s a major loss for Burlington’s downtown, which can’t seem to gain purchase no matter what kind of businesses try to operate there. Meanwhile Graham and Mebane are growing rapidly with interesting retail, entertainment, food and drink options.

I wonder if another co-op style grocer might take over Company Shops. Weaver Street Market in Carrboro operates another site in Hillsborough. That’s not likely, though. I imagine that like the old A&P grocery store it eventually replaced, the co-op site may go empty for a while.

And that, too, will be a damn shame. 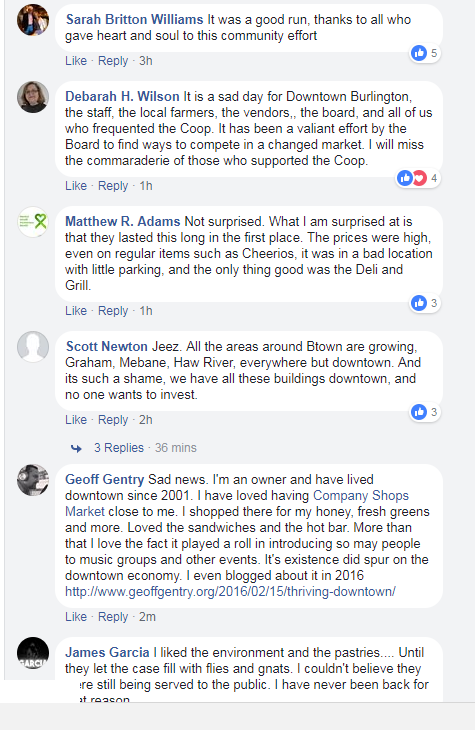 4 thoughts on “Unlucky seven: The demise of Company Shops Co-op”