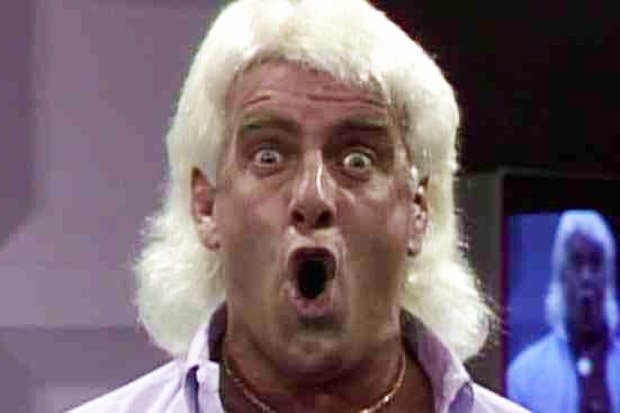 Another in a series of recently unearthed columns written for the Jacksonville Daily News last century, Feb. 23, 1997 to be exact. This one was sparked by what else, a random newsroom conversation. I’m still friends with the major players and Richlands — pronounced Rich-lands — is still the center of the known universe (I learned a year later the pastor who presided over the funeral for JFK assassin Lee Harvey Oswald was once from Richlands). Sadly, though, it’s no longer the self-proclaimed “Town of Perfect Water.” Here goes a reprint with one major edit. Because this was first published in family newspaper a word was changed to protect delicate sensibilities. This version uses the correct word — you’ll know it when you see it.

“Ric Flair used to date a girl from Richlands,” Mark Riggs declared the other night when “The Nature Boy,” a famous pro wrestler who is to serious athletic competition what Rob Schneider is to Academy Award-level acting, was caught by TV cameras sitting on the bench with the Wake Forest basketball team.

“Don’t remember the girl’s name,” Riggs continued, ignoring the accusation like he usually does when skeptical remarks come from his sports department colleagues at the Daily News. ‘But I’ve got a friend who knows.”

When it comes to Richlands, Riggs always has a friend who can back up some seemingly preposterous yarn. This is because if stories Riggs tells are accurate Richlands is certainly the center of the known universe. On this I must trust him. He has, after all, been drinking that curiously perfect water there for 20 years.

Still, Riggs has a tendency to mumble so I may not have heard him exactly right. He may have said, “Rick has a real flair for growing dates on some rich lands.”

But I don’t think so.

Anyway, at any time Riggs is likely to mention things like, for example, that Dwight Clark, the former San Francisco 49er football great who became famous for “The Catch” of a Joe Montana pass for the winning touchdown in an early 1980s NFC title game, has a brother who lives in Richlands.

Impressive, a Richlands connection to one of the great moments in sports history.

Then Riggs pulled out this one. Brooklyn Dodgers pitcher Ralph Branca, who served up the game-winning “The Giants win the pennant!!!” home run to Bobby Thomson in the National League playoff for the right to go to the World Series in1951, once played in a  pickup basketball game with Mark’s dad, who, of course lives in Richlands.

Hmmm, Richlands linked to “The Catch” and “The shot heard ’round the world?” It was starting to get deep.

“Bullshit,” Good barked loudly in response. He does not bark softly. It is unknown if Good bites or vice-versa.

“I swear it’s the truth,” Riggs said, raising his right hand in an upward motion often seen in situations where perjury is a matter for some consideration.

“I’ve got another one,” Riggs went on. “You know those Greyhound buses?”

I told him I had a passing familiarity with that form of transportation, better known as “Leave the driving to us, tasteful behavior optional.”

“Well the Greyhound on the side of those buses was designed by a guy from Richlands.”

“I swear,” Riggs said, and again held up his hand. “His name is Elmer Griese.”

This connected Richlands to just about everywhere in the continental United States and possibly parts of Idaho.

“Sounds like Richlands is like the game they play on the Internet called “Six Degrees of Separation From Kevin Bacon,” I said. “The theory is that you can name any movie star ever known and somehow trace whoever back to a film or TV show with Kevin Bacon.”

Riggs thought for a second and said, “That Kevin Bacon movie “Tremors” was based on something that happened in Richlands.”

But Riggs was only kidding, I think.

Or maybe there is something in that water.