A little more than a year ago Leo Lambert announced plans to retire as president of Elon University, ending 19 remarkable years guiding a once small regional college to its transformation into a nationally renowned university. On the day his plans were made public, I had worked at Elon barely a month. I remember telling people that “usually folks wait at least six months before they make an escape after my arrival.”

I was only joking but the announcement by Lambert was still a jolt. I had anticipated working under his leadership for a few years at least before he settled into whatever intriguing thing is next. He promised that day — Feb. 10, 2017 —  to remain in office until the end of 2017 and into 2018 if necessary until a replacement was hired. After that, he would go on a one-year sabbatical to relax a little, read and write a book. Then he will return to campus and settle in as president emeritus much as the Dr. Earl Danieley did decades ago. He’ll write. He’ll teach. He’ll raise funds and greet alumni from his new office at the Martin Alumni Center.

So over the past year I have witnessed a few “last-ofs” for Leo, a person I got to know pretty well before accepting a job as a writer in University Advancement in December of 2016 after 34 years in newspapers. As the newspaper editor we often interacted at social functions related to Elon events. And like any other subscriber, when he had a home delivery problem, he gave me a call. I spoke to him in his office during the interview process for my career change in December. That’s when I decided it would be best to refrain from calling him “Leo” anymore and started to address him as “Dr. Lambert.” After all, he’s the boss.

Since then I’ve witnessed Dr. Lambert’s last spring convocation as president. His final commencement address as president — although he will be guest speaker for commencement in May for this graduating senior class. I happened to be in attendance last spring when Oprah Winfrey paid a surprise visit for a student to Elon’s Baccalaureate, Leo’s last as president.  I was there for his final Fall Convocation (a great afternoon with former British Prime Minister David Cameron). I attended his final Elon holiday party, the last Parents Council address and too man other “last ofs” to list here, Tuesday was perhaps the last of the “last-ofs), the weekly College Coffee — a long-standing Elon tradition. Dr. Lambert and wife Laurie were honored at a special College Coffee held in Alumni Gym, a place also undergoing its own “last-ofs” as it gives way in the fall to the massive Schar Center. The final men’s basketball game was there Monday (a loss to James Madison). The final women’s game takes place on Thursday, the day Elon’s new president, Dr. Connie Ledoux Book moves into Dr. Lambert’s old office as the ninth Elon president. I’ve known Connie well for several years. She’s a former professor in the Elon School of Communications, a provost and one of the founders of our Community Connections forums. We were a part of that team together.. Sstarting Thursday, she’s no longer Connie. She becomes Dr. Book. After all, she’s the boss.

A large crowd gathered for Dr. Lambert’s last College Coffee. The gym floor was appropriately full on a morning packed with appropriate speakers and tributes. A student presented an acorn, representing the acorn Dr. Lambert gives to incoming first years at Elon. Dr. Steven House, provost and executive vice president, announced that the Ward Family Excellence in Mentoring Award this year is going to Dr. Lambert for 19 years of being the best mentor on campus to students, faculty and staff. Dr. Kebbler Williams, a member of the Elon Board of Trustees, took the stage and made two announcements. One was creation of the Laurie Lambert Scholarship, which will be given to an outstanding member of the Elon women’s basketball team. Laurie Lambert is an ardent supporter of Elon athletics, especially the women’s basketball team and a warm presence on campus to all.

The second announcement seemed to me very appropriate indeed. The trustees decided to name the Academic Village — a site that was created as part of Dr. Lambert’s vision — the Lambert Academic Village. The Academic Village is among my favorite sites on the Elon campus and a place I researched thoroughly for one of my first writing assignments at Elon. What is now the Lambert Academic Village was modeled on the Jefferson Academical Village at the University of Virginia. Lindner Hall, home of Elon College, the College of Arts and Sciences, is the anchor. On the opposite end is Phi Beta Kappa Commons, where College Coffee and other events are held. The Academic Village is a symbol to Elon’s belief and dedication to a liberal arts education in the Jeffersonian tradition. The pavilions located there include the Numen Lumen Pavilion, the home of multi-faith programs at Elon. It was the final piece of the puzzle.

The Phi Beta Kappa Chapter at Elon was a landmark achievement at Elon. In 2010 the university became one of seven in North Carolina to be so designated. Only 10 percent of colleges and university nationwide have Phi Beta Kappa chapters. Attaining that status was among the goals Dr. Lambert had in mind when the Academic Village was created between 2002 and 2013. Much of this is outlined in George Keller’s book, “Transforming a College: The Story of a Little-Known College’s Strategic Rise to National Distinction.”  Anyone with an interest in higher education or Elon should find a copy and read it. The narrative brings Dr. Lambert’s achievements into sharp focus.

At College Coffee today Dr. Lambert was there with Laurie Lambert, their children and grandchildren. It was a morning of applause from appreciative students, friends and colleagues. If it’s the last “last-of” as Elon’s eighth president, it was certainly appropriate.

On Wednesday night Dr. Lambert will exit, clearing the way for Dr. Book. I expect a seamless transition. And I look forward to seeing Dr. Lambert again when he returns as president emeritus. Maybe I’ll start calling him Leo again. 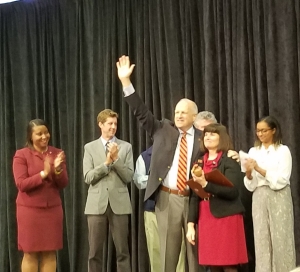