When the Rev. Billy Graham visited Elon on the morning of Nov. 7, 1951 he was in the midst of a rise in national prominence that would one day lead to the label “America’s Pastor.” I saw that designation quite a few times on Wednesday when the famous evangelist and arguably the most notable North Carolinian ever passed away at age 99.

Back in 1951 he was leading his crusades across the nation mostly in large metropolitan areas. Greensboro was among the smallest stops on his tour that year and he set up for a couple of weeks, according to a story provided by Elon University.  The archives found stories in the Greensboro Daily News about the tour itself. Elon’s publication of the time, the Maroon and Gold, carried an announcement that Graham would be appearing for a quick stop to deliver a message to students. But no recollection was immediately available about what Graham said that day in the Elon archives.

As it turns out, the Burlington Daily Times-News did publish a story about Graham’s appearance at the then-college that was affiliated with the United Church of Christ and whose athletics mascot was a “Fightin’ Christian” into the 1990s. I thank my Burlington friend, attorney and thespian Reid Dalton for providing a glimpse of the story he accessed via newspapers.com — an Ancestry site I really need to bookmark and join. Some things are worth paying for.

Under a search for Billy Graham speaks at Elon, Nov. 7, 1951″ Reid found a story with this headline: “Graham Calls for Return to Basic Christian Belief.” 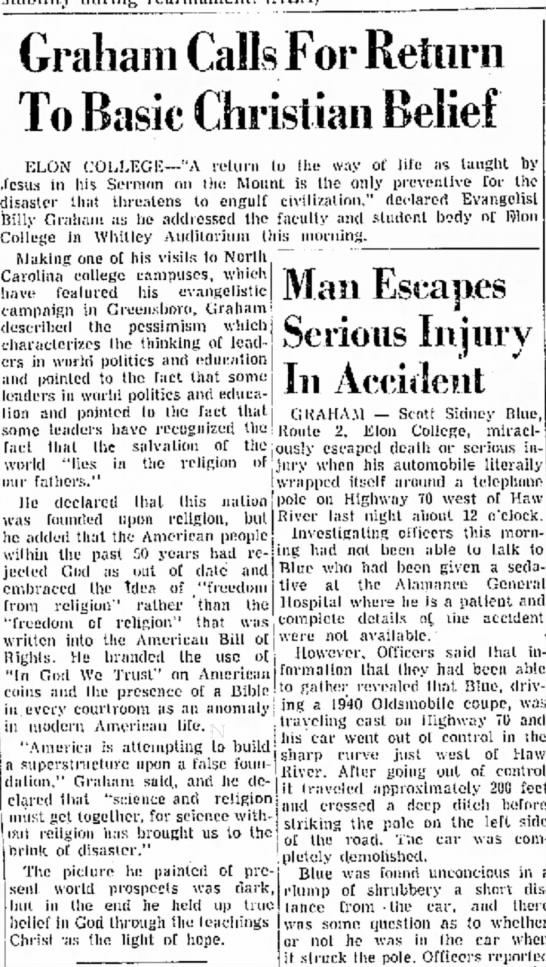 I note that the story, like many from that time in the newspaper’s history, did not have a byline. So I can only assume a reporter or editor was in attendance at Elon that morning. The Daily Times-News (now simply Times-News) was an afternoon newspaper with delivery after lunchtime in those days (and until the 1990s). The author witnessed the visit then returned to the newspaper office in Burlington to write a quick story that then went through the laborious typesetting process en route to its press run. Every newspaper produced back then was a daily miracle in retrospect.

I learned about the Graham visit through a telephone call Wednesday morning from Cynthia Ward of Burlington whose family has a longtime connection to Elon — her husband Max Ward was an Elon alumnus, trustee, community leader, photographer and businessman who operated  Max Ward Delmar Studio, which eventually became LifeTouch Max Ward Studio. Cynthia told me on Wednesday that LifeTouch is now owned by Flickr. Cynthia attended the Billy Graham appearance at Elon and described it as a life-changing experience.