I few years ago I wrote about Christmas Eve memories of going to my grandparents house on my mother’s side of the family. It was a great event with a house full of rowdy men and children along with the women who did the real work and put up with the shenanigans. I’m only slightly exaggerating, of course, through the prism of time and the child I was when these events happened. Well, maybe a little more than slightly. My Tuttle cousins would know better. I think a great many of us have strong memories of time spent with family on Christmas Eve and Christmas Day. Peace to you all this season.
—
One by one Papa stacked cigar boxes beside the softly cushioned rocking chair that was his and his alone. It was a massive piece of furniture well-conditioned by years of use that owned one corner of the living room, extended, of course by a matching and equally worn ottoman placed directly in front.

Papa would never, ever own a recliner, at least not in my recollection. It wasn’t his style.
Cigars, though, certainly were. Everybody in the town of Walnut Cove knew it.
And on Christmas Eve at the home of W.H. “Boley” Tuttle, the cigars never stopped coming.

One after another befuddled gift-givers — a group that included not only sons, daughters, their spouses and assorted offspring but longtime friends, new acquaintances and loyal customers — paid holiday tribute to “Mr. Boley.” They bestowed box after box of the Hav-A-Tampa or Tampa Nuggets he favored and smoked steadily throughout the day at his popular hardware store on the town’s Main Street or into the night just down the road a piece at the home he shared with his spouse, who we called “Mamie.”
He was my grandfather.

And for more years than I can accurately recall, Christmas Eve was spent at Mamie and Papa’s house. It was a Tuttle tradition that created an ever growing house full of people in a raucous family that began with Mamie and Papa’s five children, my mom being the youngest. I was one of a dozen grandchildren, but among the littlest in that group. My older cousins actively ignored the youngest ones, with good reason. We mainly made a racket followed by a mess they would ultimately be called upon to clean up. Needless to say, when their children came along, we returned the favor. 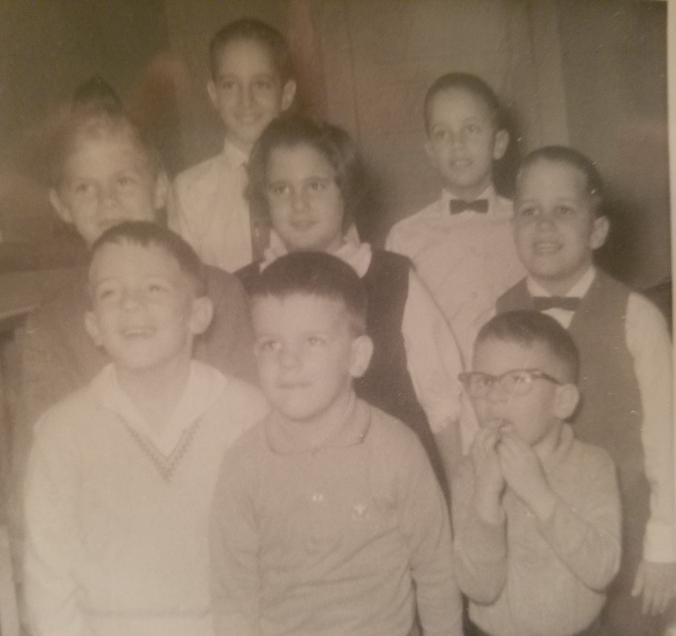 Most but not all of the Tuttle cousins on Christmas Eve in around 1962 or ’63. My younger brother was an infant and not in the photo. Our cousin Nat was still to come along. Our older cousins Donna and Jean are not in the photo but their brother Sam is. Note, I’m the one who can’t keep his hands out of his mouth.

Planning for the Tuttle Christmas Eve started with Thanksgiving. Names were drawn at that time in order to keep gift-giving reasonable. All the parents and grandchildren participated. Mamie and Papa did not. They got a gift for everyone and from everyone. Usually the parents received something from Tuttle Hardware, a business that still exists today under the wise management of my cousin Bill but is hardly the same operation. In the days before big box stores ruled the retail world, places like Tuttle Hardware were pint-sized Wal-Marts. They sold everything from nuts and bolts to paint, rifles, handguns, washers and dryers, TVs, Hi-Fi’s, refrigerators, toasters, model cars, baseball mitts, bikes, Timex watches, overalls, hats and fishing tackle. Pretty much everything but ladies undergarments when you get right down to it.

It was the kind of place where people would go and hang around for a while. Still is.
So anything from the hardware store was bound to be pretty cool. Maybe even something we had never seen before. After all, Mamie always had the most high-tech kitchen appliances. The first color TV I ever noticed was stationed across from Papa’s comfy-looking chair.

Christmas Eve festivities always started a little later than Mamie liked, mostly because the men were never on time. Papa and two of my uncles kept the hardware store open until 6 p.m. that day so folks could pick up the assorted items they might need for the holiday. And being a full-service store they never sold lawn mowers, weedeaters, rifles, bicycles or go-karts that would require assembly by customers themselves. They even offered gift-wrapping for hapless men desperately shopping as the final minutes of the day were winding down.

When the men finally got to Mamie and Papa’s after a long day, someone who was never directly identified would make the eggnog, which required an ingredient illegally obtained from a local moonshiner in those pre-ABC store days. I can’t report anything about how it tasted because we were barred from going within 10 feet of the punch bowl and had to be content with spice gumdrops and coconut candies. Meanwhile, let’s just say the formerly dour and exhausted men became far more jovial as the evening wore on. 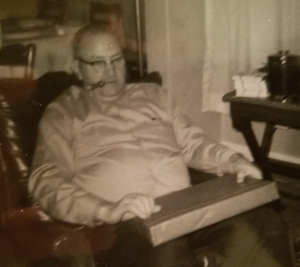 Papa with one of the few packages that didn’t contain cigars. It was apparently so rare someone got a photo of it.

Later after a turkey and ham dinner with all the accompanying dishes was consumed, it was time to open the presents. The little kids — me for example — tore through the ones with our names attached at speeds that would petrify an astronaut. We were not only anxious to see what we got but there was an important deadline to meet. It was set by the WFMY weather forecaster Dave Wright who was always monitoring the movements of Santa Claus and his team of reindeer via radar and offering dire warnings about when kids should be in bed.

Papa, meanwhile, would calmly unwrap decorative packages suspiciously shaped like cigar boxes and then act all surprised when, in fact, they turned out to be full of cigars. After unwrapping a box, he would place them upon another, creating his own Tampa Nugget version of the Leaning Tower of Pisa before starting a second and a third and a fourth. It never seemed to end.

“Boley, when on earth are you going to find the time to smoke all those cigars,” my grandmother would ask as he neared the end.

“I’ll get around to it directly,” he said and put a smoldering stogie in the ashtray.

2 thoughts on “Then one smoky Christmas Eve”