I probably should’ve posted this on what has become Giving Tuesday — the Tuesday after Thanksgiving and Black Friday, and Small Business Saturday and Cyber Monday and whatever they think of next to fill the hours on Sunday.

For many of us giving is something that’s a part of the season stretching from Thanksgiving to the New Year. Part of our Christmas or other holiday traditions that encompass the idea of peace on Earth and goodwill toward all. I usually touch base with several agencies during these days and weeks — often through the Love Enough to Share program offered by the Burlington Times-News. I will this year, too. I do so because I’m inspired by the person I call my “anonymous friend” who has helped many individuals, organizations and families with cash donations for the last four or five years. And I’m inspired to help Christmas Cheer in particular by the story of my late friend and newspaper colleague David Howell. We all called him Big Dave at the Jacksonville Daily News where he was a sports writer and copy editor. Before that, he worked for the Kinston Free Press. (Find information about how to contact Christmas Cheer of Alamance County here).

Today I want to share the story of Big Dave and why when I think of Christmas Cheer, I think of him.

I’ll start, of course, at the end — the day Big Dave called in sick at the Jacksonville Daily News. It wasn’t an unusual thing really. It happened every few weeks or so. Sometimes his blood sugar was a little off or his bronchitis kicked in. He was a big man — a very big man — with diabetes so the occasional health problem wasn’t all that surprising.

And other times, well, the baseball all-star game was on TV.

You couldn’t really prove the latter but it happened often enough to raise the suspicions of his more jaded co-workers.

Big Dave was a newspaper lifer. As one myself until a year ago, I recognized the symptoms. He loved to write, enjoyed knowing what was going on ahead of everybody else and was consumed by popular culture, sports, politics and quirky news. He could be cynical, sarcastic and even a bit angry. Most of us in the business are.

He was among the best small market sports writers I’ve ever known and was dedicated to covering high school sports. He first worked in Tarboro, near his native Rocky Mount, then had a stop in Jacksonville, Kinston and back to Jacksonville. He thought it important to cover high school sports the way some newspapers cover the ACC and only left sports writing once climbing the bleachers in high school gyms became too physically difficult.

He was a serious baseball fan and visited every Major League park — arriving in many of the cities by train. He was a major supporter of hockey, even before the Carolina Hurricanes blew into Greensboro, then Raleigh. He would loudly debate any who questioned why an NHL team should be in North Carolina. He’d get his dander up, too, if fans of Carolina, Duke, State or Wake Forest snubbed his alma mater, East Carolina University. When references were made to the Big Four, he was quick to say, “That’s Big Five.”

He was tender and caring, too. Lots of times I’d walk by his desk and he would say out of the blue, “Madison, how’s Papa Joe doing?” in reference to my father-in-law. He’d ask about our cat, too. Big Dave was a softy for felines. And when it comes to pets taking on the appearance of their owner, well, let’s just say his cat “Animal” weighed 21 pounds and was known to consume bologna by the gross.

But the size of Big Dave’s heart easily exceeded his own substantial girth. He always gave more to Onslow County Christmas Cheer than I knew he could afford — small town newspaper jobs didn’t pay much then or now. When the newsroom at the Jacksonville Daily News decided to not only adopt a family but an elderly person as well, he nearly doubled his donation to meet the need.

“I just can’t stand the thought of an old person rattling around in a house without heat,” Big Dave told me the first year we paid for a complete winter of warmth for a woman in her 70s. He was proud that we took this on and even prouder to help. He loved the newsletter my wife wrote after the holiday gifts were delivered in which she detailed the reactions of those we had helped.

Once Big Dave left sports, he settled in on the news copydesk — that area of the operation where people select stories, write headlines, crop photos or design pages seen by readers the next day. It’s stressful, exacting and demanding work completed under a clock that moves without conscience. It’s a place where the spotlight never shines — until something goes wrong. He came in every Wednesday and worked a 10-hour shift putting together the newspaper. His week would end on Saturday.

On the Wednesday before Thanksgiving in 2005, though, he called in sick. Like I said before, nothing unusual about that. He was scheduled to be off on Thanksgiving Day and return to work on Friday.

But Big Dave called in sick that day, too. He suspected the flu and said he was going to see a doctor. He missed Saturday, too.

After that we never heard his soft southern voice again.

Big Dave was found dead in his apartment on Tuesday, Nov. 29. Doctors said his big heart gave out because of the flu. He was 47.

Not long after his funeral on Saturday, Big Dave’s mom took my wife aside and handed her an envelope. It contained money he’d saved throughout the year to give to Christmas Cheer. As usual, it was more than he could afford.

His big heart was still going long after it stopped.

The Burlington Times-News publishes a list of Christmas Cheer cases. Here’s a recent example of the need. 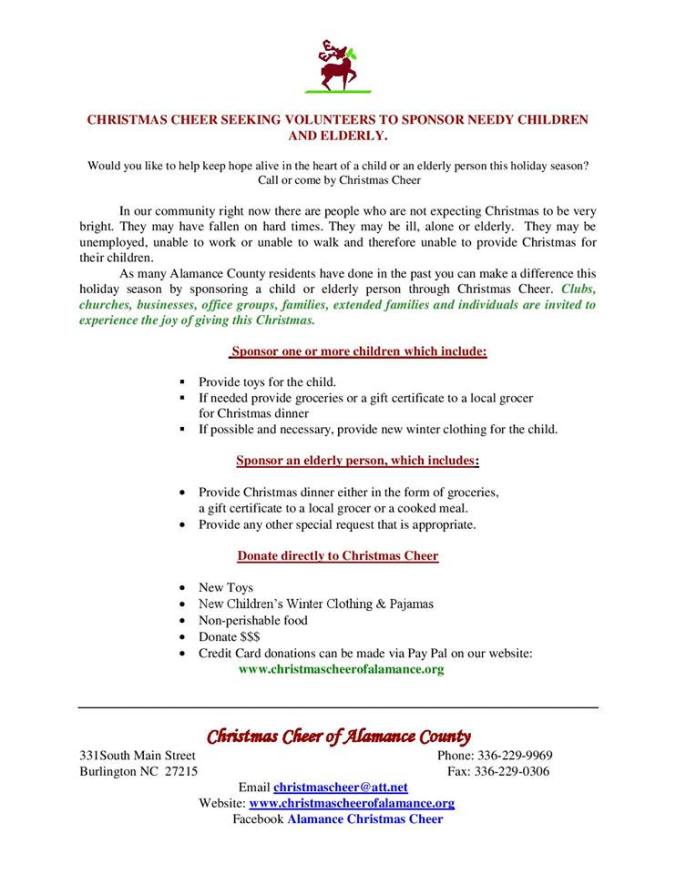 One thought on “The story of Big Dave, a big man with an equally big heart”