UPDATE January 27, 2021: This is a post from November of 2017 containing a letter written by a member of the Baseball Hall of Fame — Joe Morgan — during that year to the baseball writers who decide what former players and manages are in or out. It also contains a column I wrote in 2013 about the hall when no players were voted in due to the Steroid Era of baseball. That happened again yesterday, which set off another round of debate about who should make the hall and who should not. Morgan wrote this letter at the behest of other HOF members who believe Steroid Era players should not be enshrined. Sadly, Morgan along with many of his Hall of Fame contemporaries passed away in 2020 — huge stars of that era including Henry Aaron, Bob Gibson, Tom Seaver, Lou Brock, Phil Neikro and Al Kaline. And remember, a player not in the Hall of Fame itself is still remembered in the museum wing of the facility.

It was a learning experience, too.

Today that column relates to an outstanding letter written by Joe Morgan, a Hall of Fame player and former teammate of Rose with the Cincinnati Reds. Today Morgan was trending on Twitter and when I checked as to why I saw his letter, written to members of the Baseball Writers Association of America who vote for members of the Hall of Fame. In the letter, Morgan implores them not to cast ballots for players who used performance enhancing drugs such as steroids.

Here’s the text of Morgan’s letter. My column from 2013 follows. 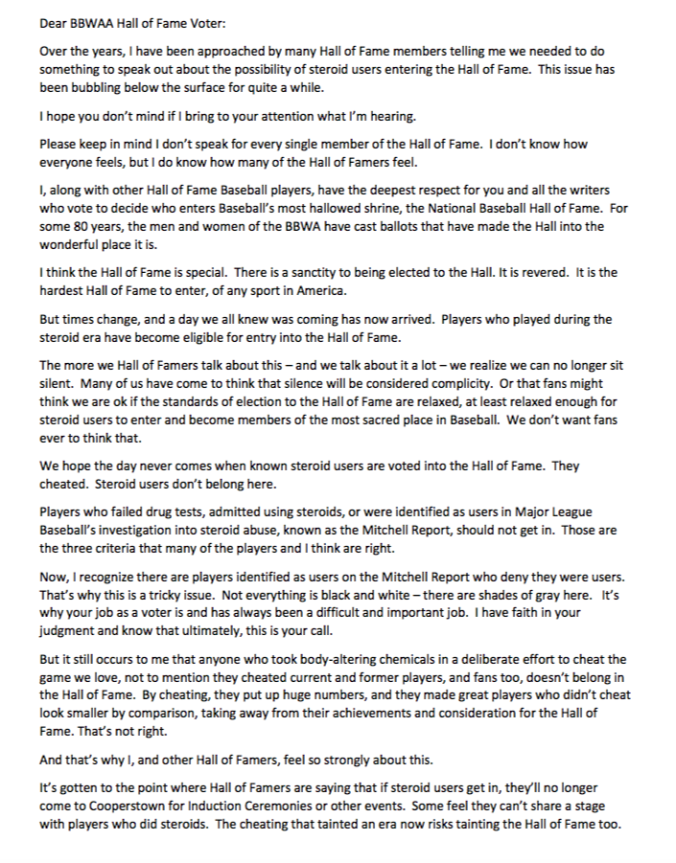 I’m not usually one for sending — or receiving — text messages. Place me among those old-timers, throwbacks and quasi-Neanderthals who believe that conversation still has some function in the modern world.

So yeah, OK, I’m old school to the point that I still take recess every day at 10 a.m. no matter what.

But this past summer I was compelled to not only send a text, but also attach a photo.

I did so while visiting Cooperstown, N.Y. It was also my first time there. As I was entering the main tourist attraction in that small town nestled among upstate New York’s rolling hills and metallic blue Finger Lakes, I saw something I wanted to photograph and send to a friend who is a huge fan of the Cincinnati Reds baseball team.

I sent the image, while my spouse supervised since, as I said before, I was a rookie. I got back a response almost immediately. This texting thing might be pretty useful after all, I said to myself — but only to myself.

My friend Eileen wrote in return: “Yeah, where’s Pete’s banner?” in reference to former Reds great Pete Rose, a player of renown who was banned from baseball for gambling on the game and subsequently not enshrined in the storied Hall of Fame.

I was glad she asked. It was like a hanging curve waiting to be crushed into the cheap seats.

“Here’s Pete!” I texted back, with an attached photo of a Pete Rose jersey hanging in a display about the championship Cincinnati teams from the 1970s. Later I sent her another photo of the bat Rose used to break Ty Cobb’s record for most hits by a Major League player. It was amid items about players who have broken baseball’s most hallowed records.

“Who says Pete Rose is not in the Hall of Fame,” I asked dryly in my text. “He’s everywhere.”

Everywhere, except in the actual Hall of Fame itself.

It’s a subtle difference, but a big one.

The huge brick structure on Cooperstown’s Main Street, is home to a wealth of baseball artifacts, photographs, films, paintings, sculptures and souvenirs. It’s a full-service museum and monument to all things baseball.

Visitors can follow a weaving path that occupies three floors of seemingly endless space. The history of baseball occupies the first floor with a comprehensive timeline of events that shaped the game. There is everything from Honus Wagner’s glove — about the size of a work glove — to Stan Musial’s locker, Jackie Robinson’s jersey and an area noting the betting scandal that embroiled the 1919 Chicago White Sox, known today as the Black Sox.

And there is, of course, Pete Rose’s shirt.

Nothing, it seems, is left out.

There is a room noting the accomplishments of Babe Ruth and a room detailing the Negro Leagues and the integration of the game. There is a section about women in baseball and another about the emergence of Latino stars. Upstairs where records are highlighted, a wall is dedicated to Hank Aaron as the “Home Run King.” Other sections celebrate records by players from Cy Young to Roger Clemens. Yeah, that Roger Clemens. And under records for home runs and other achievements is Barry Bonds. Yeah, that Barry Bonds.

They are all part of the museum, which also houses the Hall of Fame.

THE HALL OF FAME section of the museum, known as the Plaque Gallery, is a cavernous room within the building, but away from where the artifacts are displayed. Its walls are lined with images of famous players, managers and owners cast in bronze so each resembles “Star Wars” hero Han Solo after he was encased in carbonite by Jabba the Hut.

Not sure they had that goal in mind originally, though.

It’s a solemn place. Those fortunate enough to be noted with plaques had to receive enough votes to get there. It’s reserved for truly special accomplishments and a place of celebration. They call it being “enshrined.”

This year, the Baseball Writers Association of America, who cast ballots on new Hall of Fame members annually, failed to vote in a single player. Clemens and Bonds, among the game’s presumed immortals, were on the ballot for the first time. They and others are tainted by the cheating period attributed to widespread use of performance-enhancing drugs in baseball.

Without that on their resumes, both would surely be “enshrined.”

There are those who say omission of cheating or gambling ballplayers from the Hall of Fame is somehow erasing the game’s history. But the museum itself preserves the history of the game. The Hall of Fame fetes those who made it great, not those who besmirched it.

Perhaps one day, when the Steroid Era of baseball fades into history, the National Baseball Hall of Fame and Museum will create a room in which the issue is addressed in detail.

That would be appropriate.