It was in early November of 2013 when I began to notice an odd sensation on the right side of my head — like tiny bugs with intermittently sharp claws were crawling there without stopping. It wasn’t exactly painful, but not pleasant either.

It happened the week of municipal elections. I remember that. It also coincided with a new venture I was undertaking with Elon University. The Times-News partnered with the school for a joint community forum first held on November 4, 2013. The city elections were the next day. It was a busy and stressful time and I delayed going to the doctor until Thursday, November 7. Meanwhile, my head felt worse every day. 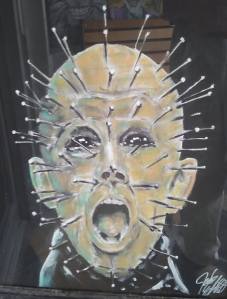 I walked by a downtown Burlington piercing and tattoo business and saw this image of the fiend from the “Hellraiser” movies. It perfectly captured the feeling I had from the shingles.

I went to an urgent care clinic — what people in our newsroom called “The Doc in a Box.” And that’s about the level of care I got, too. I was asked a few questions, the P.A. checked the usual stuff — heartbeat, blood pressure, temperature and I was sent home with a prescription for a sinus infection — something I had never had before — or since.

By the weekend, though, it was obvious the “Doc in a Box” was off. My face was swollen almost beyond recognition. The sensation on top of my head and face had shifted to raw pain and lesions began to appear on my forehead and around my right eye. I thought to myself “This is no sinus infection,” in the tone actor Richard Dreyfuss used in the movie “Jaws,” when he says, “This was no boating accident.”

Because it was the weekend by then I went to the walk-in medical facility operated by the Kernodle Clinic at Alamance Regional Medical Center. My regular doctor is based in the Kernodle Elon operation and by coincidence happened to be the weekend doctor at the clinic that weekend. Another physician in the Kernodle group took a quick look and said one word that would alter my life.

By this time, he explained, the telltale shingles pattern was fully visible. It attacks in small patches in specific areas of the back, shoulders, head, etc. He also gave the “Doc in a Box” a break. “Early on it’s not always that easy to diagnose,” he said.  Could happen to anyone.

But it happened to me on this occasion and fairly or not I still blame the late diagnosis for the post-shingles condition I still have today. One that has never left. One I may endure for the rest of my life.

After my diagnosis at the Kernodle Clinic I was advised to set up an appointment with an ophthalmologist and I followed immediately with the Alamance Eye Center who assigned me to Dr. Charles Sydnor, who is now retired. Dr. Sydnor is among my favorite physicians of all time. He told me flat out that in this case I was actually fortunate to be blind in my right eye — a first for me. A case of shingles located where I was impacted can lead to tons of eye trouble, including blindness. Thankfully he found no other eye damage but he acknowledged that my future might be troublesome in other areas. “This nicked you up pretty good,” he said.

He was right. I looked terrible. I stopped by the office and one of my co-workers saw my face and exclaimed, “What happened to you? Were you in a wreck?” I shook my head and said, “Shingles.” “Isn’t that the OLD PEOPLE DISEASE?” she asked rhetorically.

In a couple of days the Elephant Man look went away. The lesions disappeared. Something else remained behind. To this day the right side of my head and forehead alternate between numbness, that insect crawling sensation and sharp pain. It has every single day since November of 2013.

They call it neuropathy. In the great scheme of things, there are much worse conditions to have. But it’s not pleasant in the least. Windy days are a bitch. I can’t really wear a hat comfortably and not at all if it moves on my head with any frequency. I haven’t been able to sleep on my right side since contracting shingles. At the end of a day, my glasses cause a nagging ache on my forehead and right temple. I don’t like to be touched, particularly by surprise or accident. Of all those things, the wind is by far the worst.

Not big-time problems, but enough to be an irritation and change my lifestyle substantially.

I thought by now the condition might improve. I learned shortly after contracting shingles that long-term nerve damage was a possibility for a small portion of sufferers. Some are helped by nerve-reducing drugs like gabapentin or Lyrica. The latter is often touted in TV advertisements. I found that neither eased the discomfort to a large degree and offered side effects that I wished to avoid. Memory loss for one, weight gain was in there, too. And Lyrica is also very expensive. I have yet to try acupuncture. I hear it works for some.

So I decided to try and live with it the best way I can. Some days are better than others. And, as I noted, others have problems that are far greater.

But I always remember that a few weeks before I came down with the virus my friend and one-time and now retired newspaper colleague Jay Ashley advised me to get the shingles shot. He saw a report on TV and thought I was a candidate to get it, even though I was just 54 at the time. I assured him that I would take care of it. But I’m a clueless male and simply didn’t do it. As it turned out, Jay was almost psychic in his accuracy.

So I always offer this advice to anyone over 50 who had the chicken pox as a kid: Get the shingles shot. It may not prevent shingles, but you stand a better chance with the shot than without. Believe me, if you can avoid the shingles, do so.