Memo to us, otherwise known as the Community Connections Planning Committee:

In the future, avoid dates for our forums that include the words “Tornado Warning.”

Yes, what the TV weather forecasters like to call “severe weather” crashed our party on Monday, Oct. 23 at Elon University. Conditions conducive to tornado formation were all around us and just before our 7 p.m. start time, the bottom fell out in terms of rainfall. A downpour accompanied by high winds enveloped all of Alamance County. As night fell, it wasn’t the best time to be on area roads.

And people heeded this hazardous situation in droves.

It was one of three portions of a – no pun intended – perfect storm that marred our first Community Connections for the 2017-18 school year. It’s our fifth year of holding these public forums where issues are discussed in a partnership between Elon and the Burlington Times-News. This one was not only our most poorly attended ever, it was our least populated by far. About 20 people showed up – and hardy souls they were. I believe I knew every single one of them. Most in attendance were either affiliated with Elon University, the newspaper or there as a panelist.

We had zero student participation outside of a handful of Elon News videographers. Public attendance  was almost that strong.

The weather played the largest role but I would be hiding the truth if I said it was the only factor. Going in to the evening I was concerned about two things: One, the forum was on a Monday night, normally a time when local government boards such as the county commissioners or board of education meet. Before the day started a couple of our regular participants messaged me their regrets due to those kinds of commitments.

And two, because of a scheduling conflict we moved the forum to a different venue – Lakeside Meeting Room at Elon instead of the McKinnon Room in the Moseley Center. That was a major problem, even for those who made it. At least four told me they had difficulty finding it and a couple admitted to walking around 15 minutes trying to follow signs leading them there. It’s just not that easy to find for those who don’t work on the Elon campus and at night it was especially tricky. Those who looked for Lakeside Meeting Room on a campus map couldn’t find it. The new site – all previous Community Connections forums were held at Moseley – created further concerns about parking.

So people responded in a predictable way – they didn’t come, in bunches.

Typically our forums – which have covered topics ranging from gun violence, health care and poverty to racism, the First Amendment and the future of politics – draw crowds ranging from 75 to nearly 200. They’re students, professors, Elon staff and people from all parts of Alamance County who may be on campus for the first time. The forum on Monday was a very good one dealing with technology, automation and the impact those things have on current and future jobs. It’s a major shift in terms of what kind of training is required – a message for people from all walks of life in our community. It was a great presentation with a lot of important information. The biggest takeaway, though, was this: There are good-paying jobs in Alamance County in clean manufacturing for those willing to learn a new skill. 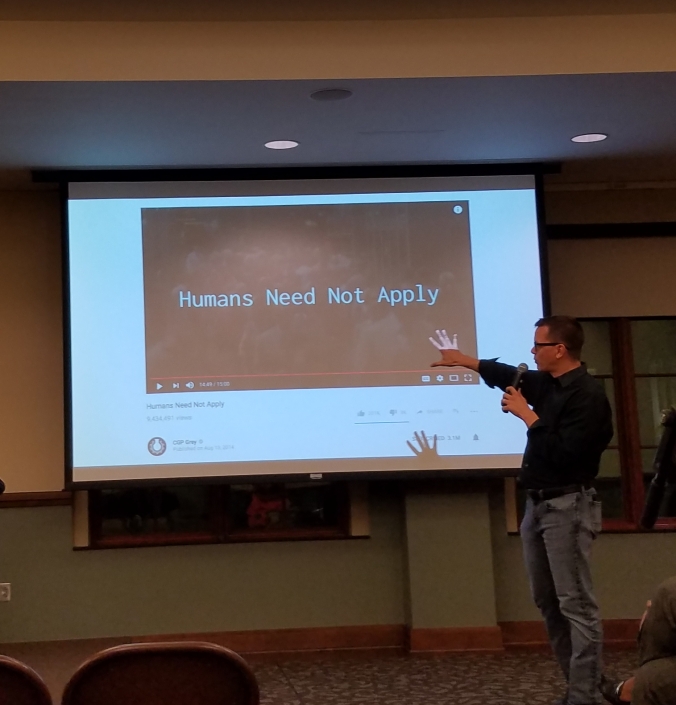 Elon professor Tony Crider gave an opening presentation Monday on artificial intelligence and technology before the panel discussion got underway.

It’s a shame so many people missed it. The information would be of particular value to parents of kids in high school and guidance counselors. For those interested in more information about the jobs I’m talking about, contact Alamance Community College. That’s the best place to start.

In terms of our next forum, plans began the next day to address the issues that kept attendance low on Monday. We established a date well into the future – giving people plenty of time to put it on their calendars. We found a date in which the McKinnon Room, our traditional home inside the Moseley Center, was available. And we set the date for a Wednesday night – Feb. 21. Few local government meetings are held on Wednesday nights.

Our winter topic might be among the most intriguing to date. Last summer we decided to examine trust, mainly the erosion of it in long-established, foundational institutions. It seemed to our group that one of the key elements in society of today is the great suspicion the public has for government, politicians, journalism, education, higher education and science. These once highly regarded elements of our society are now viewed with widespread skepticism and scorn. Why and what are the consequences of this?

Soon we will begin to assemble a panel for this discussion. Those with ideas about who we might invite can leave them under comments here.

And hopefully we can avoid a Tornado Warning in February.