I stopped by my old newspaper office for a visit on Thursday. Bob Sutton, the longtime sports editor for the Times-News asked me what I might know about a reunion at Elon this weekend around the season-opening football game with Charleston Southern. 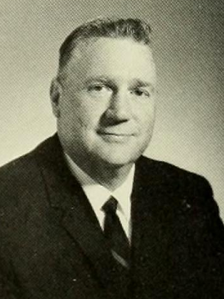 Bob proceeded to fill me in. Apparently a group of former Elon players from the 1960s and ’70s are having a gathering to honor their coach, Red Wilson, a singular figure in the history of what was then known as Fightin’ Christians football at then-Elon College. Elon, now a university with the nickname Phoenix, had a stout football program under Wilson’s guidance. In fact, Elon was largely known for football during this period and it often competed for postseason national championships in the NAIA, Elon’s division at that time. Red Wilson was a Piedmont celebrity. He even spoke at an athletic awards banquet at my high school —  South Stokes — in around 1975 or ’76.

Red moved back to the Burlington area in 2015, taking up residence in the Twin Lakes retirement community. Here’s an editorial I wrote when he returned.

Anyone living in the Piedmont who followed sports over the last 50 years knows the name Red Wilson. He’s the football coach who put then tiny Elon College on the map. Then he went to Duke University and did what most at the time thought impossible, posted two winning football seasons within a four-year period.

Wilson, who turns 90 in September, was the subject of a large welcome home party Monday night at the Fat Frogg Bar & Grill, a place co-owned by Jeff Mackenzie, one of Wilson’s former players. Several men who once filled the roster for what was then known as The Fightin’ Christians traveled back to Elon for the event, which was planned by Mackenzie and Jerry Tolley. Tolley, now the mayor of Elon, succeeded Wilson as head football coach and used the foundation built by Wilson to win back to back NAIA national titles.

By any standard, it was an impressive run.

More than any other figure, Wilson is the father of modern-day football at Elon, creating and defining a level of success that began with his arrival in 1967 and extended into the mid-1980s, well after his departure. He’s still the all-time leader in career victories at Elon (72-34-2) and built the college into an acknowledged regional juggernaut and national power at the NAIA level. His last few seasons at Elon his teams charged to a 53-16-1 mark.

Wilson’s impact on Elon earned the school wide recognition and the football program he constructed defined success, but his largest influence was on those students who attended Elon and played under Wilson’s guidance. Many said as much on Monday, during the gathering put together to coincide with Wilson’s return to this area. He moved to the Twin Lakes Retirement Community last month after living for the past 16 years in Pinehurst.

Among the notables were Rich McGeorge, a tight end at Elon who was among Wilson’s first players and is widely held as the best football player in school history. He was the first tight end taken in the NFL draft of 1970 and played for nine seasons with the Green Bay Packers. The quarterback of those McGeorge teams, Burgin Beale, was also among Monday’s storytellers. He called Wilson an “innovator” who influenced players in countless ways.

“He was always prepared. That’s what he did, I think, for us. Those of us who went into coaching, he showed us how to get prepared when you coach,” Beale said. “And those who went into business, he prepared us to get ready, to see something through and to enjoying the success when you do.”

Always humble, Wilson referred to himself as “just an old has-been” on Monday night, something that few in crowd assembled at the Fat Frogg believed. Coaches, like teachers or anyone else who serves in a mentoring role, can never be has-beens if their influence is still being felt. It was obvious on Monday that Wilson is far from a has-been. For that matter, neither is Dr. Earl Danieley, Elon’s president emeritus, also 90 and on hand Monday. Wilson thanked Danieley for giving him the chance to coach at the school so many years ago.

Wilson said he plans to make the short trip from Twin Lakes to monitor Elon practices and watch the games. We hope so. It’s always nice to have someone like Red Wilson in the neighborhood.