I’ve said on more than one occasion that when I was a newspaper editor I wasn’t much of an editorial writer. I didn’t like that part of the job very much and even lobbied to get rid of the opinion pages entirely. Often the editorials didn’t reflect my own views but the collective voice of the newspaper’s opinion page. But sometimes …

Indeed, three years ago this is an editorial I wrote on the 40th anniversary of Richard Nixon’s resignation from office. In many ways I believe the partisan divide — already a factor in our politics even then — grew exponentially worse from this point and led to where we are today.  So I’ll once again share these thoughts on this, the 43rd anniversary of Nixon’s resignation — and I’ll include my second favorite Nixon photo ever. By the way, those on Twitter who aren’t following @dick_nixon are missing out on some great political observations.

Richard M. Nixon is a singular figure in U.S. history. America’s 37th president was equal parts puzzling and maddening yet admirable for his intellect. He was politically treacherous, strategically cunning and socially awkward. Yet he could hold a stage with any foreign leader, charmed campaign donors, shared plays with football coaches and once greeted Elvis Presley during an unannounced visit to the White House in the middle of the night. He could be repugnant. He could be malevolent. He was often fascinating.

And, most notably, he’s the first and so far only American president to resign from office in disgrace.

Nixon announced his intention to resign 40 years ago today, Aug. 8, 1974. He did so in a televised address to the nation when it became apparent that impeachment and likely removal from office were inevitable. He had lost the confidence of major Republican allies in Congress who were appalled by the president’s conduct well beyond the so-called third-rate crime conducted at Democratic National Headquarters in a now iconic place: The Watergate Hotel in Washington.

A day later, Nixon and his family would depart the White House leaving behind a signature wave now parodied on TV shows from “Saturday Night Live” to “Seinfeld” and the newly sworn in president, Gerald Ford. Nixon was later pardoned by Ford, thwarting any potential prosecution for wrongdoing.

And thus ended a tumultuous chapter in American history, but certainly not discussion about it. For many of the Baby Boomer generation, the Watergate scandal, as it came to be known, defined the next two decades and set a tone for political discourse in ways that echo today. Even the word “Watergate” has become synonymous with scandal, spawning Billygate, Debategate, Irangate, Monicagate and, well, so many “gates” that an online Wikipedia page “List of scandals with –gate suffix” contains several hundred entries from the fields of politics, entertainment, business and sports.

Indeed, it could be argued that the great political divide that has now become a canyon in our nation began with the distrust spawned by the Watergate break-in and the partisan controversy over the subsequent investigation and impeachment that left both parties bruised and sore for years.

For his part Nixon, who died in 1994, remained out of the spotlight. He authored books, avoided the press he so distrusted, and established his presidential library in Yorba Linda, Calif. Even the latter wasn’t without turmoil. Nixon’s law school alma mater, Duke University, was in the running for the library but was eventually dismissed because the uproar on campus in opposition was vocal and often caustic.

But periodically, Nixon returns to the news. Often it’s with the release of a new set of White House tapes from his era, tapes of conversations in the Oval Office, conversations that supplied the so-called “smoking gun” that led to his resignation. This week, a different set of tapes, video taken in 1983 in which he discusses Watergate and his thoughts about it with a former aide, became publicly available for the first time. And Nixon even has a voice via social media. Multiple Twitter accounts are based on Nixon, and one, @dick_nixon, has been called far more than the usual parody account.

Most troubling, though, is the growing notion that Nixon’s crimes in retrospect were not so substantial. Many fail to remember that it was not the well-publicized burglary that ultimately snared Nixon and his cohorts, including his chief of staff and attorney general, but the cover-up of what occurred under the direction of his campaign operatives. It was a widespread web of illegal or unscrupulous activity that touched many departments overseen by the executive branch and led to reforms that put some of those machinations — including the IRS — out of the control of future presidents. It was a vast abuse of power by a learned man victimized by his greater demons, a breach that soured millions on government for generations.

That’s the ultimate lesson from this sad affair. 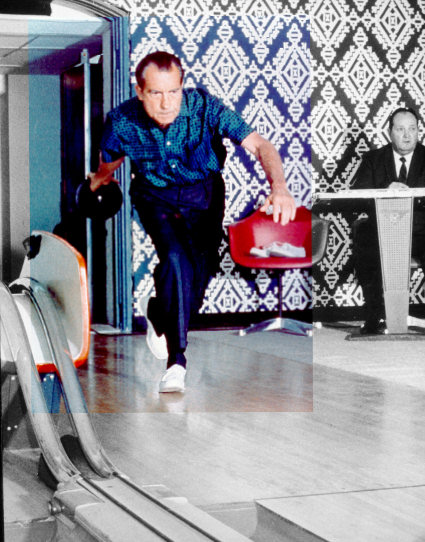 Bowling at the White House beats covering up political shenanigans.