I wrote this editorial in August of 2015, shortly after then-Burlington City Manager Harold Owen called me to let me know he planned to retire. He called me again the other day to let me know he might be seeking a return to city government, but this time as an elected member of Burlington’s City Council. Apparently he made it official shortly thereafter. Here’s what I wrote then and I still believe it now. Good luck to Harold. The city races look very interesting this year, especially in Burlington with a lot of familiar names running for mayor and council.

It’s difficult to talk about the next city manager of Burlington without evaluating the last one. And the person who succeeds Harold Owen will indeed have big shoes to fill.

That is the tall order Burlington City Council now faces as Owen departs from the job he’s done so well for so long. Monday was Owen’s last day as city manager, after 13 grueling years of handling the city’s affairs on a 24-hour basis, seven days a week. Owen’s retirement also closes a notable 40-year career in city government with the vast majority of his time spent as director of Burlington’s highly respected Recreation & Parks Department. 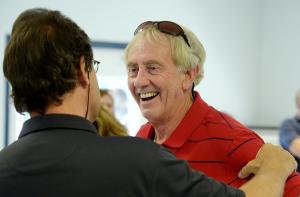 And while Owen’s full tenure will surely be remembered for his stamp on how city residents spend leisure time, history will no doubt focus upon his period in the top chair, overseeing every aspect of how Burlington functions. It’s a wide-ranging position calling for expertise in everything from public safety to water and sewer pipe. Indeed, managing a city the size of Burlington or larger — or a county for that matter — is a grinding task, one made more difficult by how little the public actually understands about it.

When Owen took over as city manager, he couldn’t possibly foresee how many challenges were ahead. He assumed the role not long after 9/11 with the nation still reeling from the economic impact of that awful moment in our history while also redirecting energies in many communities toward improved security. A minefield still lay ahead. There would be the economic collapse of 2008 to navigate, developing new economic avenues as textile jobs left our area, juggling mandates from the Jordan Lake Rules and devising strategies to handle a world evolving into one driven by digital technology. One of Owen’s noteworthy achievements is putting together an Information Technology Department for the city. Under his watch, the city bulked its online and social media programs to reach the public in more ways than ever before. And, the public could reach the city in ways previously unimagined, which gave critics greater access and also made the job more challenging.

Owen had a hand in myriad other landmark efforts, including the development of the massive retail hub along the western interstate corridor, which landed University Commons and Alamance Crossing. That includes planning University Drive and Boone Station Road. He was part of upgrading Animal Services, including the addition of the Spay & Neuter Clinic of Alamance County; renovation of the South and East Wastewater Treatment Plants; analysis and upgrade of city streets; and a salary study for police officers. Downtown Burlington, stagnant for several years, has shown signs of life in the past couple of years as well.

As Recreation & Parks director his impact was highly visible, including new community centers for North Park and Fairchild; building Joe Davidson Park, the Lake Mackintosh Park and Marina, the Maynard Aquatic Center, and the Robert Kernodle Senior Center. He had a hand in renovating and expanding May Memorial Library and developing Springwood Park.

It’s a long list of achievements that really only scratches the surface of Owen’s contributions to Burlington. In full measure, Harold Owen took the time in his career to care not just about the city’s business but the quality of life Burlington could maintain for its residents.

Local government leaders like that are difficult to find.