The date was July 4, 1999. I was working for the Jacksonville Daily News, a newspaper on the North Carolina coast that serves Onslow County, Camp Lejeune and Carteret County. And by serve, I mean news. Food, well …

Before going further, note that the events you are about to hear occurred before there were smartphones. There is no photo evidence to corroborate this story.

First let me say that we had no idea what we were getting into.

Upon first glance, it seemed easy enough. Any fool could do it. In fact, dozens had accomplished the mission with varying degrees of aplomb for years. How hard could it be, really, to set up refreshments for a few thousand people on the Fourth of July?

Then again, the Onslow County Parks and Recreation Department had never before offered the opportunity to a bunch of newspaper people.

The mission our publisher chose to accept was to be the provider of a range of traditional
July 4 snacks to the people who annually converge upon Onslow Pines Park on the holiday for a late afternoon and early evening of music, games and fireworks. Proceeds from our sales would go to the Newspapers in Education program.

Piece of cake, right — or hot dogs, popcorn, brownies and … pickles — as it turned out.

Volunteers were sought at the Jacksonville Daily News office to take on this assignment. Because beaches almost in our backyards are generally rendered inaccessible to locals due to the holiday invasion of tourists, there were plenty of takers.

And, of course, as newspaper people, we were clueless about what to do when we got there.

The pre-event planning had all the precision of a kindergarten recess. People taking the early shift were told to be at Onslow Pines at around noon to set up for when people began arriving at 2. I got there with Roselee at the appointed time and searched high and low for someone in charge — like our publisher, perhaps.

And there was no one.

In a minute or two, someone from the parks and recreation department pointed us to an outbuilding where long tables were stored. We were told those might be needed for this particular area of the park. As we set those up, the parks and rec folks also informed us there would be another area to monitor, a standing concession stands across a football field on the other side of the park.

“But there’s no reason to go over there now,” she said.

It had an ominous tone I overlooked at the time.

As other newsroom, advertising and circulation volunteers arrived, we did what newspaper people do best — wander around aimlessly and make snarky remarks. After about 30 minutes, our publisher arrived with some containers in which we were supposed to make and sell lemonade, a slew of brownies made by his spouse, who was talented in this area, and a host of big plans that were about as firm as partially cooled Jell-O.

Making the lemonade took no time at all, rendering it drinkable ate up another 30 minutes, as we also tried to figure out what a reasonable price would be for a drink or a brownie or both.

“Can’t we just give this crap away?” I asked.

The publisher then decided that what we needed was ice cream so he sent someone to a nearby Food Lion to buy boxes of ice cream sandwiches and fudgecicles. A minute or two after doing so, it dawned on him that there was nothing on hand to keep ice cream frozen. He said he had a solution and disappeared with his car. 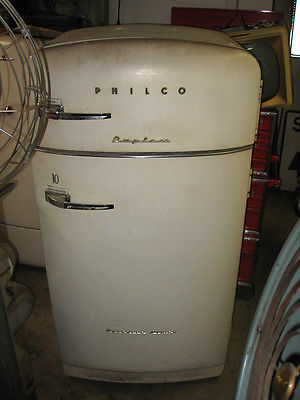 I don’t think this is the same fridge but it damn sure could be.

Shortly after the ice cream arrived, the publisher returned in a truck hauling a refrigerator that might have been used in the sitcom “Ozzie and Harriet.” It took about 10 people to get it off the truck and place it near our makeshift tables.

I turned to Roselee, “Let’s see if it works?”

Fortunately, it lurched into semi-action. Unfortunately, when he opened the door it smelled as if the remains of Jimmy Hoffa had once been stored there.

“Don’t let any customers near that damn thing,” I warned.

At this point, it seemed that heading over the concession stand was a good idea.

At the concession stand we were instructed to clean things up inside and prepare it for sales of candy bars, popcorn and hot dogs. The Health Department would be inspecting our work shortly. Apparently we had to win approval of sanitation experts before sales could proceed.

Thankful that this never had to occur in my own pre-marriage kitchen, we set about making a pretty messy place up to health code, while clearing out enough space for five or more people to operate effectively. We moved dozens of boxes and scrubbed the site down with some kind of disinfectant the parks and rec people provided. The health inspector arrived within 30 minutes and gave us a nod and put up a sign alerting the public that it could consume food without fear. But he didn’t look confident in doing so. Let’s just say I didn’t see him drop by later with his family for a bite to eat.

This is the type of rotating hot dog machine we encountered that day — only that one was full of spider webs — not nice and new like this one.

Next we tried to figure out how to get the hot dogs ready. We spied one of those rotating hot dog machines in a corner of the stand, but it was full of spider webs and looked like it was last used during the Carter Administration. This didn’t deter the enthusiasm of the publisher who began loading hot dogs into it without even clearing away any of the accumulated debris.

After plugging the thing in and determining that it did not, in fact, work, we moved to plan B. The publisher found some kind of outdoor boiler and we set it up and started putting in the hot dogs as customers finally began lining up.

Meanwhile, he decided pickles needed to be sold and left to find some. WTF, I thought to myself, only I didn’t say WTF.

People were patient as we worked to get those hot dogs — the ugliest looking things ever — ready for consumption. Many of the franks emerged from the nasty water split and mangled beyond recognition.

“Cover it up with chili,” I told my colleagues. “Hopefully nobody will look too closely.”

Mercifully, our shift ended before things got too crowded or the customers began to revolt. Needless to say, I was revolted myself.

Later we were told things went pretty well. No one turned up at Onslow Memorial Hospital with stomach or other problems. The NIE program made money. The pickles were a hit, oddly enough.

But I don’t believe the parks and recreation department invited us back.