First of all, I’m painfully aware that no one cares about my NCAA Tournament bracket. No one gives a rat’s – or Rick Pitino’s – ass what teams I predict will be in the Final Four either. I get that. I don’t care about anyone else’s picks either – especially the experts at ESPN.

But I’m going to provide it anyway because, well, it’s tradition. And what else is there to do until baseball season gets here?

Actually, for the first time in a couple of years I’m jumping into an NCAA Tournament pool, something patently illegal in this state and many others. To protect the guilty I’m not going to reveal who or what is managing this alleged gambling operation in which I am a co-conspirator (OK, so it’s not really alleged). I’ll just acknowledge it exists and hope local law enforcement has better things to do – such as managing their own illegal pools.

A couple of things before revealing my selections.

No. 1: I have never, even once, won an NCAA Tournament pool at any level or anywhere.

No. 2: I have never even been close to winning.

No. 3: I am a reformed fan of Wake Forest, which means I have had rather limited exposure to winning basketball throughout my lifetime. I can say though that Tim Duncan is not a fictional character, although he seems to exist only in my memories anymore – much like the “Road Warrior.”

No. 4: As a reformed sports writer, I probably don’t know much about sports either.

No. 5: Selecting one bracket and one bracket only is mandatory. I make my selections for good or bad and in one quick flurry and move on.

No. 6: The reasons for my longstanding futility in this contest should be readily apparent.

I turned in my choices online Wednesday ahead of a noon deadline today. I do have a computer-generated and nicely typed bracket produced by the online service kindly providing the contest infrastructure. But for purposes here I have hand-written a bracket. I’m old school, much like Tony Bennett’s Virginia Cavaliers.

Speaking of the Cavaliers, I have them going out today against UNC Wilmington. We’ll see how that turns out. The Hoos under Bennett play outstanding defense, so outstanding it sometimes hinders their own scoring. Teams that can’t score frequently struggle in the NCAA Tournament. I have no idea why.

In terms of first round upsets I have UNCW, East Tennessee State, Marquette, Xavier and Wichita State. No real biggies. I took Wichita State because they appear to be seeded incorrectly. I took East Tennessee State over Florida because I’m not a fan of the SEC and Florida once hired Billy Donovan and Steve Spurrier. I chose Marquette and Xavier because they’re playing former ACC teams South Carolina and Maryland, respectively. Both left the conference for no apparent reason so I’m picking against them for no apparent reason.

They don’t care but it makes me feel better.

I have a few other upsets scattered here and there the rest of the way. But really, there are no upsets in this thing. Nearly all of these teams can play. My main thought about the NCAA Tournament is that seeding doesn’t really matter, teams have to beat the team in front of them to “survive and advance,” as the late Jim Valvano used to say. How teams match up is more important. In fact, teams who win the whole thing largely do so because of the teams they can avoid.

That said, I failed to pick a Big Four North Carolina team for the Final Four in the first time in forever. It just worked out that way. But Duke and UNC could easily make it and even meet each other a fourth time in the title game. UNC had a clunker in the ACC Tournament semifinal against Duke, not usually a good sign. Duke seems to be playing its best right now, but a high number of freshmen and some inconsistency this season from players like Grayson Allen may pose a roadblock or two they’ll have to overcome.

So how does my Final Four look – for those one or two people who might be interested?

Villanova, Notre Dame, Kansas and UCLA. I have Kansas vs. defending champ Villanova in the final with ‘Nova taking the title game. Unless, of course, new national darling from Alamance County Lamont “Junior” Robinson now playing for first round cannon fodder Mount St. Mary’s can produce a historic upset tonight against Villanova. Not likely, but could happen. “Stranger Things” is more than a TV show on Netflix. The impossible happens every so often.

That should be enough. 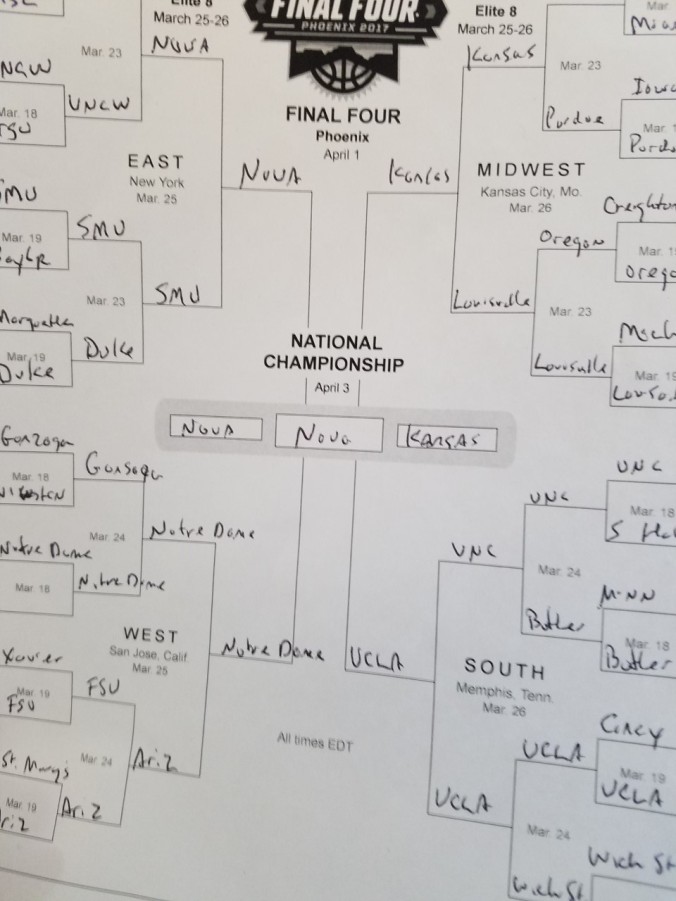