QUICK UPDATE: Syracuse coach Jim Boeheim tried to smooth over any ruffled feathers during a radio interview today but still believes his original statement about media markets. Roy Williams, on the other hand, seems to agree with me. The site could be just about anywhere because media is also everywhere.

With all apologies to Paddy Chayefsky, brilliant author of the great film screenplay, “Network,” here is a response to Syracuse coach Jim Boeheim, who again took another swipe at Greensboro as a site for hosting the Atlantic Coast Conference basketball tournament. It’s a favorite subject for the longtime sourpuss and aging coach who no doubt misses playing in the old Big East conference tournament held annually in New York’s Madison Square Garden. This year, for the first time and the first time since Syracuse joined the ACC, the conference’s signature tournament is being held in Brooklyn, N.Y. in the Barclays Center. It’s being played to near empty houses — not even fans of the Orange showed up on Wednesday to watch Syracuse lose to Miami. Boeheim said following the game — probably after being asked because I’m not sure if he initiated the conversation — that there was never a good business reason — “no value, none” in holding the tournament in its traditional home of Greensboro. But he’s wrong for several reasons. Here goes. 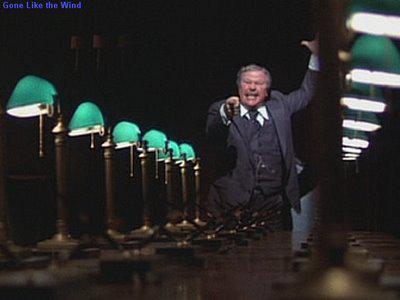 You have meddled with the primal forces of nature Mr. Boeheim and I won’t have it! Is that clear?! You think you’ve merely made another snide swipe at a smaller North Carolina city — that is not the case! The Atlantic Coast Conference has taken billions of dollars out of this state and region and now they must put it back. It is ebb and flow, tidal gravity. It is ecological balance. You are an old man who thinks in terms of conferences and major media centers. There are no conferences. There are no major media centers. There are no important newspaper publishers. There are no more Big Three Networks. There are not even any C.D. Chesleys or Crockett Promotions! There is no NCAA, not really! There is only one holistic system of systems, one fast and immune, interwoven, interacting, multi-variate, multi-national dominion of dollars. Football dollars, basketball dollars, soccer dollars, baseball dollars, tennis dollars, golf dollars, hockey dollars, Reichmarks, rubles, pounds, yen and shekels. It is the international system of currency which determines the totality of sports on this planet. that is the natural order of things today. That is the atomic and subatomic structure of sports today. And YOU have meddled with the primal forces of nature and YOU WILL ATONE!

Am I getting through to you Mr. Boeheim?

You get up on your little podium and howl about the good old days of the Big East, about New York, Washington, Chicago, Los Angeles and this business of a unified major media monolith governing sports. There is no monolith. There is no democracy in college athletics. There is only the University of Alabama, and the University of North Carolina and Duke and Kentucky; UCLA, Ohio State and Michigan. Those are the forces in the collegiate sports world today. What do you think executives at ESPN talk about in their programming meetings — the games of the Twentieth Olympiad? They get out their linear programming charts, statistical decision theories, minimax solutions and computer the price-cost probabilities of their transactions and investments just as university athletic directors do. We no longer live in a world of conferences, regions and rivalries Mr. Boeheim. The sports world is a corporation of colleges inexorably determined by the immutable bylaws of business, bowl games, football championships, and the holiest grail of all, the NCAA Men’s Basketball Tournament. The world has changed Mr. Boeheim! It has since Red Grange slogged around in the mud in Illinois. And our children will live, Mr. Boeheim, to see a world where collegiate games are held in any location and be aired on television or streamed digitally to millions of people who won’t really care where the game is being held unless they actually own a ticket to attend in person. Advertisers who don’t care where the games are played will continue as sponsors to sell their products to an audience of captive consumers. The games could be played in, yes, New York but also Atlanta or gasp — Greensboro or Greenville or Green Level. Modern technology has rendered New York no more important than anywhere else as a major media purveyor. Media coverage is already around us 24 hours a day, seven days a week.It comes by ESPN and Fox and CNN. It comes by CBS and NBC and ABC. It comes by Twitter, Facebook, Instagram and Snapchat. it comes via websites of every description.

Why does a place like Greensboro matter to the ACC Tournament, Mr. Boeheim? Because it’s where the largest share of ACC fans are, dummy.

For those who didn’t see it, here is the text of what Boeheim had to say on Wednesday.

And for those who haven’t seen “Network” here’s the great monologue by the character Arthur Jenson to the TV anchor Howard Beale.