Two items on today’s (Feb. 7, 2019) Region section page of the Burlington Times-News got my attention. One was the print headline: “Council tables townhouse decision.” Online the headline on the same story is: “Again, Burlington Council holds off on Garden Road development.”

Under either headline I’m bitterly opposed to this project and I’m glad the city it taking it seriously. Tabling it is a good start. Ending it would be better.

The second item was a feature photo — sometimes called a “standalone” photo in the newspaper business because it is printed with no story attached. The photo was taken by Woody Marshall, who is doing an excellent job as the newspaper’s newest and only full-time photographer. Believe me, he’s working his butt off. I met Woody a few weeks ago after he started. For Woody it’s a return. He worked at the Times-News for a few years in the 1990s. Our paths never crossed but he shared time at the newspaper with several people I worked with over the years. They all speak highly of him.

The photo itself looks innocuous. It’s of a young guy moving on a skateboard down South Mebane Street along the streetside because he is simply out of sidewalk and has nowhere else to go. It doesn’t look exactly safe because it probably isn’t. And it inadvertently highlights what I have long held is one of Burlington’s biggest problems — a lack of sidewalks. This screenshot of the photo is a great illustration. 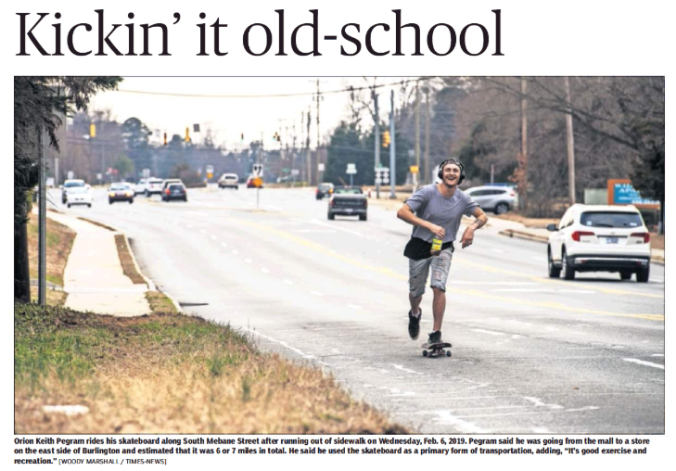 Check main thoroughfares around town and it’s obvious. Church Street from east to west Burlington is one major example. People on foot often have nowhere to go but dangerously close to high-volume traffic. Bicyclists face the same dilemma. It’s both a safety issue and a time issue. If bicyclists have only the road on which to travel, vehicle traffic will back up behind them.

Typically Burlington has excelled at amenities for residents. For decades, though, this has slipped through mainly because of expense. it costs money to put in sidewalks. But in a modern culture that wishes to park their cars and find alternative means of getting around in neighborhoods and communities, this is a growing problem. I would walk many places in my neighborhood given a sidewalk or two.

Which brings us back to these townhomes that will necessitate rezoning on Garden Road. In the spirit of transparency and full disclosure, this proposed development is in my general neighborhood. So I can say if approved it will be the third set of apartments constructed on or just off Garden Road in the last four years or so. The area was already densely populated with single-family housing, St. Marks Church, a Wal-Mart shopping center and Alamance Crossing Shopping Center. Traffic is a growing problem on Boone Station Road and Garden Road. And there are no sidewalks on the latter so walking to Alamance Crossing or nearby Savannah West Shopping Center on St. Marks Church Road is a serious danger at best..

The new proposed townhomes would encroach into already established single-family housing. The site plans call for only limited parking, which means some will likely spill over onto other streets, creating a nuisance for residents.

Speaking of St. Marks Church Road, a new apartment complex is scheduled to go in across from Savannah West Shopping Center not very far from one of the busiest intersections in the city — St. Marks Church and Church Streets. While roadwork is going on at the intersection to add lanes, I doubt it will do much to ease the bottleneck that occurs at that intersection — especially when Elon University is in session. With multiple apartment complexes already on Rural Retreat Road, traffic and congestion will only get worse — all near Joe Davidson Park. Lovely.

And again, there are no sidewalks available there for apartment dwellers or nearby homeowners to perhaps ease the number of vehicles.

I realize the city council is limited in what it can legislate in terms of development and typically I don’t speak out about it. But if the city is going to allow development without infrastructure to support it then the result is the disaster that is the traffic and parking situation at University Commons Shopping Center where some Christmas shoppers probably remain trapped from a weekend visit in December.

A neighbor circulated a petition on our street in opposition to the townhomes. I did something I almost never do. I signed it.

5 thoughts on “Burlington: Where the sidewalks end and development begins”