I never met my grandfather, the man for whom I was named. Well, that’s not exactly true either. He certainly met me. I wasn’t much to look at  back then — at least in physical size. he could lift me right up and hold me in his arms in those days even though by that time he was small, frail and facing a bleak future after a long bout with kidney disease. Kidney disease was winning big time, of course. The medical advances it would take to prolong his life were a good chunk of my lifetime away.

I was his first grandchild. he would never really know another one.

he held me for the first time in 1959. By 1962, he would be out of our lives in the reach-out-and-touch sense, a permanent resident of the Danbury Town Cemetery where he was laid to rest in a quadrant reserved under the name “Taylor.” The Taylor plots were just down from the “Martin” plots, which were across from the Hall plots, which were just apiece from the Pepper, Joyce or Petree plots . . . and, well you get the picture. An iron gate divided the sections, serving as tiny barriers to protect one family’s history from intermingling with that of another.

Yes my grandfather, “Grandpa Ed” I came to call him, left far, far too soon — long before I could successfully record his voice in the large cassette of my memory. These days I can only picture him through the haze of old photographs.

“If your granddaddy had lived it’d be a sight how spoiled you’d be,” my father was fond of saying those many years ago. “It seems like every time he came over here — and after you were born he found a reason to come over here about every day — he always brought you something.”

Of all those things I only have one, a toy Texaco tanker truck that rests on a bookshelf in a guest room in our house today in Burlington. It is most certainly an antique. It will never, ever be for sale as long as I walk the earth.

Anyway, as I said, Easter for me back then was always about my grandfather. It wasn’t planned, not really. We had very few Easter traditions. We weren’t church-going people. We attended from time to time, but oddly enough spent hours around the family dining table discussing the merits of organized religion. I came to realize years later that we were indeed a religious family but one with a serious aversion to preaching.

There was, however, one Easter tradition my father held in regard and accomplished each year while he was still able. He would purchase pots of red-blooming azaleas, which he when then haul to the Taylor family plot in the Danbury Town Cemetery and place each at the markers of Taylors family members dating back to the 1800s — or at least the ones he liked. He was particular that way. My father did this because he felt he was supposed to. Family members before him did it. Grandma wanted him to do it. Ultimately he wanted his boys to do it, too. These trips usually included stories about Grandpa Ed. After Easter he often attempted to bring the pots back to our house on the hill just outside town and plant the azaleas. It was the final piece of the tradition and the first to go.

These days I own my own home in Burlington with my wife Roselee, which is about 90 minutes away from the house on the hill where my mom — age 86 — still lives. In June my own father, Ed Jr., will have been dead 10 years. This week my brother kept the family Easter tradition alive as he often has over the past several years, usually with assistance from our aunt Mary Moon who makes the trip to Danbury from Charlotte. Azaleas aren’t the plant of choice these days. But flowers are dutifully placed.

An Easter tradition still, for now.

I know my mother worries about whether this tradition will continue after she’s gone. It’s the kind of thing a woman worries about at age 86. I can only tell her that we’ll find a way. It’s what we’re supposed to do. 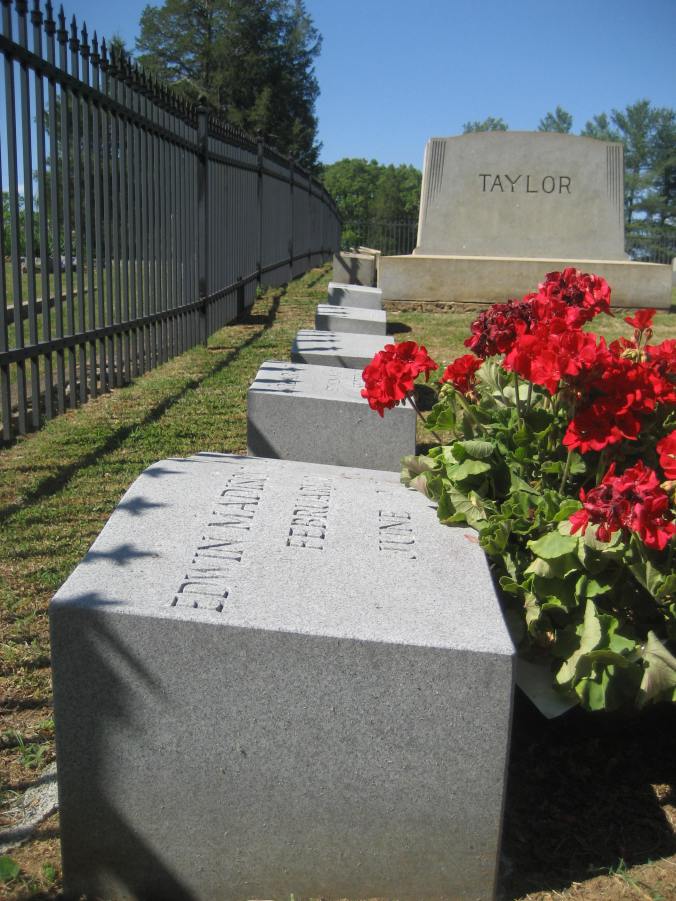 I took this photo at the Danbury Town Cemetery eight or nine years ago. This is my father’s grave — with flowers supplied by my brother.